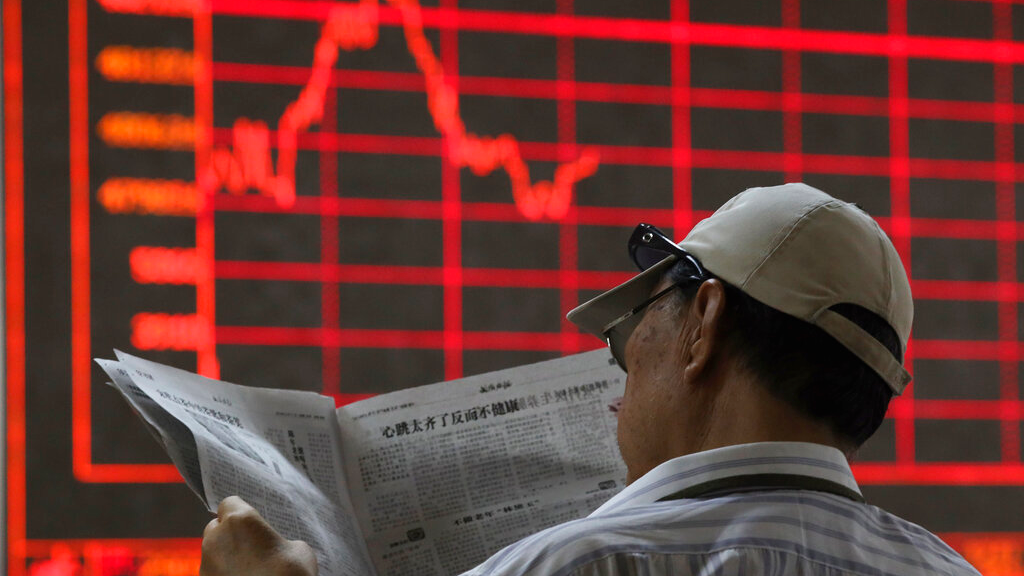 A Chinese investor reads his newspaper at a brokerage in Beijing Wednesday, June 12, 2019. Shares were mostly lower in Asia on Wednesday and Hong Kong’s Seng index tumbled 1.7% as thousands continued protests against proposed legislation that many city residents fear could further erode the territory’s legal autonomy. (AP Photo/Ng Han Guan)

The Hang Seng lost 1.7% to 27,308.46 as thousands of protesters, most of them young, prevented lawmakers from entering Hong Kong's government headquarters Wednesday.

The demonstrations snarled traffic and delayed a legislative debate on a bill that would allow criminal suspects in Hong Kong to be sent for trial in mainland China, a proposal that is sharpening fears over growing Chinese control and an erosion of civil liberties in the semiautonomous territory.

The crowds overflowed onto a major downtown road as they overturned barriers and tussled with police, who used multiple rounds of tear gas and threatened to use more forceful measures if necessary.

The proposed legal changes have spooked investors, Stephen Innes of SPI-Asset Management said in a commentary, as it "could have far-reaching consequences for attracting overseas talent and does question the viability of Hong Kong as a leading financial hub, which of course is spooking property investors."

U.S. markets had advanced for five straight days since the Federal Reserve signaled it is open to cutting interest rates, but weakened on Tuesday amid concerns that the U.S. trade spat with China could be prolonged and hurt growth in the world's two biggest economies.

U.S. President Donald Trump told reporters Tuesday he expects to meet with Chinese leader Xi Jinping in Osaka at the Group of 20 summit. But he said he's prepared to expand existing tariffs if a deal with Beijing falls through.

"It's me, right now, that's holding up the deal," Trump said in comments carried by CNBC and other news outlets. "And we're either going to do a great deal with China or we're not doing a deal at all."

Is a recession near? Stock market woes raise a nagging fear