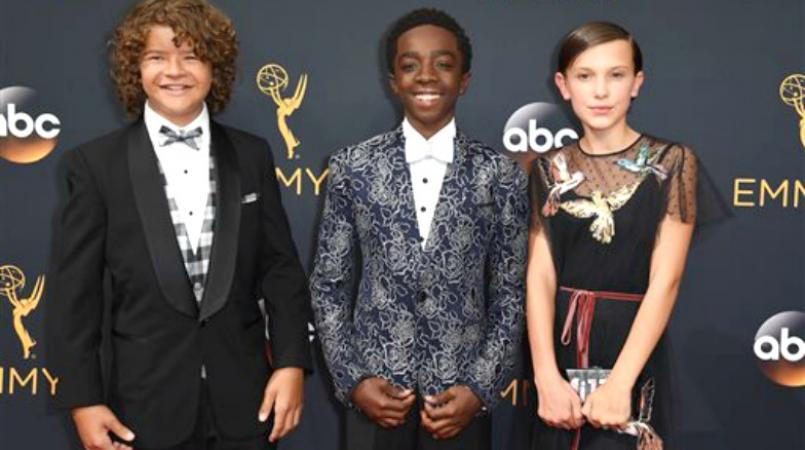 The latest on Sunday's 68th annual Primetime Emmy Awards at the Microsoft Theater in Los Angeles. All times local.

The kids from the Netflix sci-fi phenomenon "Stranger Things" are making the most of their newly anointed popularity, hamming it up on Sunday's Emmys red carpet and chatting up bleacher fans.

"Game of Thrones" and "Star Wars: The Force Awakens" actress Gwendoline Christie also stopped to pose for a few selfies while "Key and Peele" nominee Keegan-Michael Key and "UnReal" star Shiri Appleby walked by and waved.

Judith Light is being fully transparent when she tells bleacher fans how difficult it is to walk a red carpet in heels.

"I can't walk, but thanks," the actress, nominated for her role in a comedy series for the Amazon Instant Video show "Transparent," said as she responded to shouts and cheers from fans in the red-carpet bleachers.

Light was one of the first stars to walk the carpe Sunday, along with fellow nominees Felicity Huffman and her husband, William H. Macy.

It's another hot, hot, hot year on the Emmys red carpet.

With temperatures in the 90s in downtown Los Angeles on Sunday, one woman in the fan bleachers outside the Microsoft Theater was wheeled out on a stretcher by paramedics.

She was alert, sipping water and smiling but had become dehydrated. Her condition prompted event staff to remind everyone present to remember to keep drinking water.

Others in the bleachers came prepared with umbrellas, books and snacks while waiting for things to get going.

Only a few nominees had arrived 90 minutes before show time but the red carpet was bustling with security checks and other pre-show activity.

Beck says there are no known credible threats to security in Los Angeles, but those attending Sunday's Emmys in downtown Los Angeles should report any suspicious activity.

Downtown LA is an especially busy place Sunday, with the Rams playing their first home football game in 22 years at the nearby Los Angeles Memorial Coliseum.

Officials in New York are trying to determine who was responsible for an explosion that injured 29 in Manhattan's Chelsea neighborhood. New Jersey law enforcement is trying to determine if a pipe bomb that exploded at a seaside community was related to terrorism.