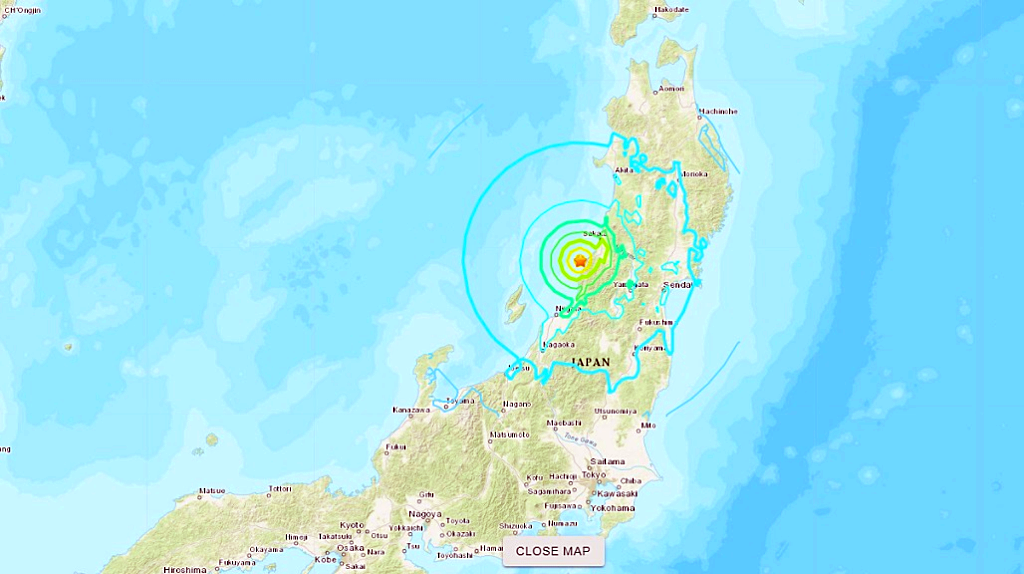 A powerful earthquake jolted northwestern Japan late Tuesday, and officials warned of a possible tsunami up to one meter (3.3 feet) high along parts of the coast.

Some areas lost electrical power and some bullet train services were suspended, but there were no immediate reports of serious injuries or damage from the magnitude 6.8 quake. Only a minor swelling of the sea was observed in several cities about half an hour after it struck.

Japan's Meteorological Agency said the earthquake was located off the western coast of Yamagata about 50 kilometres (30 miles) southwest of the city of Sakata.

It said the quake was fairly shallow, about 10 kilometres (6 miles) below the sea's surface. Shallow quakes tend to cause more damage on the Earth's surface.

The agency warned of a possible tsunami along the coasts of the northwestern prefectures of Yamagata, Niigata and Ishikawa.

Bullet train service was suspended in parts of the region because of power outages and for safety checks. About 9,000 households in Yamagata and Niigata lost power, according to Tohoku Electric Power Co.

All seven reactors at the Kashiwazaki-Kariwa nuclear plant in Niigata were off line and no abnormalities were reported.

Chief Cabinet Secretary Yoshihide Suga said an emergency response team was set up at the Prime Minister's Office to assess the extent of injuries and damage. He urged residents of the affected areas to be prepared for possible aftershocks.

NHK showed broken glasses and dishes scattered on the floor of a bar in Tsuruoka which was empty after customers rushed out, leaving behind their half-eaten food on the counter.

Japan is one of the most earthquake- and tsunami-prone areas in the world. On March 11, 2011, a magnitude 9.0 offshore quake hit the northeast coast, causing a tsunami that took more than 18,000 lives and triggered meltdowns at the Fukushima nuclear power plant.

There was no danger of a tsunami from Tuesday's quake on the eastern coast, where the Fukushima plant is located.