Struggle for control of Venezuela returning to the streets 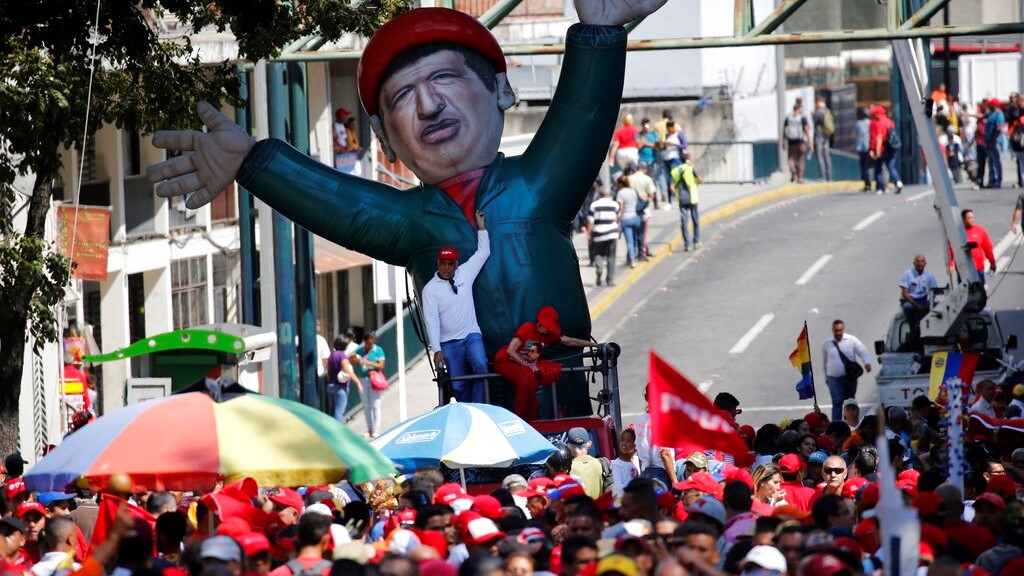 Momentum is growing for Venezuela's opposition movement led by lawmaker Juan Guaido, who has called supporters back into the streets for nationwide protests Saturday, escalating pressure on embattled President Nicolas Maduro to step down.

A defiant Maduro's socialist government has called on its own loyalists to flood the streets waving flags to celebrate the 20th anniversary of the Bolivarian revolution launched by the late Hugo Chavez.

The duelling demonstrations will play out amid a political standoff in its second week of heightened tensions — and with the potential to spark violent clashes between the opposition and security forces.

Guaido has turned down offers from the presidents of Mexico and Uruguay to negotiate with Maduro. In a letter Guaido urged both presidents to back Venezuela's struggle, saying to remain neutral aligns them with Maduro.

"At this historical moment that our country is going through, to be neutral is to be on the side of the regime that has condemned hundreds of thousands of human beings to misery, hunger and exile — including death," he said.

Guaido declared himself interim president last week before tens of thousands of cheering supporters and vowed to end Maduro's "dictatorship." His claim to the presidency is backed by the United States and some two dozen other nations.

The opposition seeks to usher in a transition by holding democratic elections, Guaido said in the letter to Uruguayan President Tabare Vazquez and Mexico's President Andres Manuel Lopez Obrador.

The United States has also rejected the offers from Mexico, Uruguay and the Vatican to mediate a dialogue.

Vice President Mike Pence on Friday met with exiled Venezuelans in Miami, reassuring them the Trump administration would continue to weaken Maduro.

"This is no time for dialogue," Pence said at a church, prompting loud cheers from the Venezuelan exiles. "It is time to end the Maduro regime."

President Donald Trump's national security adviser John Bolton tweeted Thursday that Maduro and his top advisers should retire to "a nice beach somewhere far away from Venezuela." Bolton's talk turned tougher Friday in an interview with conservative radio talk show host Hugh Hewitt in which he warned that it could be a beach area more like Guantanamo.

Later Friday, Bolton tweeted that Washington would send humanitarian aid to Venezuela despite Maduro's refusal to accept such assistance. The comment came after Guaido said he would defy the aid ban and receive convoys of medicine into Venezuela with the help of neighbouring nations.

"Pursuant to the request of Interim President Juan Guaido, and in consultation with his officials the US will mobilize and transport humanitarian aid medicine, surgical supplies, and nutritional supplements for the people of Venezuela. It's time for Maduro to get out of the way," Bolton's tweet said.

Maduro remains dug in, blaming the White House for openly backing what he calls a coup to remove him from power and exploit his country's vast oil wealth. He retains support from powerful allies, including Russia and China, but is growing increasingly isolated as more nations back Guaido.

Maduro on Friday continued a show of might as commander-in-chief that has seen him crisscross Venezuela to oversee military exercises as he vows to defend his socialist government no matter the cost.

The military's top leadership is backing Maduro, though analysts warn that rank-and-file troops frustrated by their country's economic and humanitarian crisis may not share that unwavering loyalty.

The opposition's street protests planned for Saturday are the second such mass action this week. Guaido led a peaceful demonstration Wednesday with residents stepping out of their homes and workplaces for two hours. Last week, street protests turned violent in days of unrest that killed nearly three dozen people in clashes with government security forces.

Meanwhile, a prominent opposition lawmaker called on a group of European Union and Latin American countries to support Maduro's ouster — without negotiations.

An "international contact group" announced Thursday by the EU's top diplomat, Federica Mogherini, "should help to cease the usurpation of power by Maduro and establish a transitional government until new elections," said Francisco Sucre, who heads the international committee of the opposition-led National Assembly.

"There is no possible discussion here. Maduro has to leave," Sucre told The Associated Press in Madrid, where he wrapped up a three-day European tour to enlist support for Guaido.

The European Parliament has called on the EU's member states to recognize Guaido as interim president. The socialist government of Spain, which has strong historic, cultural and economic ties to Venezuela, has said it will do so on Monday if Maduro doesn't call a general election by Sunday.

"Power is evaporating from Maduro's hands with the passing of the hours," Sucre said. "We have been contacted by diplomats across Europe who are ready to take a step forward, but they are waiting for the right moment."

Chevron has four joint-venture operations for exploration and production with PDVSA, as the Venezuelan company is known. The Trump administration has banned U.S. companies from doing business with PDVSA but allowed a six-month grace period for those with ongoing operations in the South American country.

"For the foreseeable future, we feel like we can maintain a good stable operation and a safe operation on the ground in Venezuela," Chevron CEO Michael Wirth said Friday in a conference call with Wall Street analysts.

Chevron's refining operations in the U.S. are well-prepared to handle an expected disruption of Venezuelan crude supply due to the sanctions, Wirth said, adding that Chevron had a contingency plan in anticipation of the sanctions and has alternate sourcing.