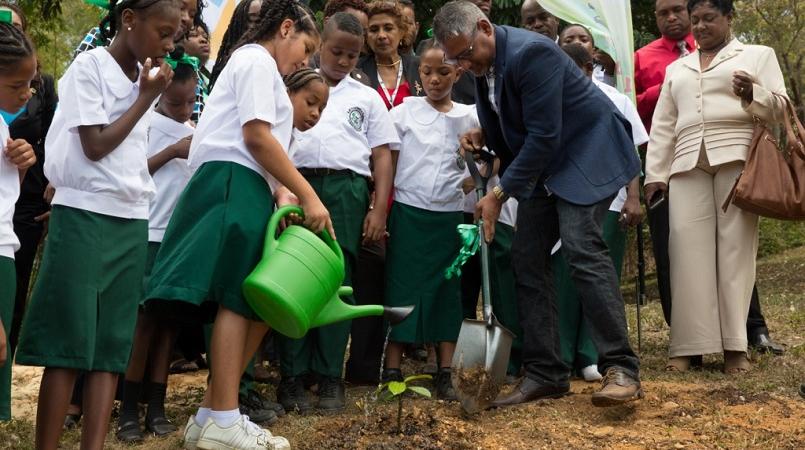 Students from 11 primary schools across Trinidad and Tobago participated in the nurturing of two Balata plants for a one-week period, as part of the Run for Food programme’s thrust to promote the importance of food security with the nation’s youth.

The caring and passing along of these plants by the students, who were all members of their school’s 4-H club, mimicked the Olympic Torch relay and culminated with a tree planting ceremony.

The first tree planting was held at the Royal Botanic Gardens in Port of Spain on Wednesday, April 5, and will be followed by the second which takes place at the Scarborough Botanical Garden in Tobago in May.

The seven schools based in Trinidad that took part in the initiative were represented at the ceremony on Wednesday. In addition to these schools, representatives from Massy Stores, the World Food Day National Committee of Trinidad and Tobago, the Food and Agriculture Organization of the United Nations, the National 4-H Council and the Ministry of Agriculture, Land and Fisheries, were also in attendance.

Speaking at the event, Senator the Honourable Clarence Rambharat, Minister of Agriculture, Land and Fisheries, signalled the importance of the Run for Food initiative stating that it would “bring people closer to the producers of their food.”

Derek Winford, Massy Stores CEO said the company is intent on being a "force for good including creating value and transforming lives".

Winford added that farmers must be more responsible with their pesticide usage.

"To our local farmers, I want to say to you keep up the production and we will partner with you as an outlet for your fruits and vegetables. But our farmers must also take some responsibility to educate themselves in a few areas.

"Namely, the chemicals, insecticides and pesticides that they use… The type of soil that they have, has a soil test been done? Farmers need to do their own research. Are the chemicals used safe? Look them up, find organic versus synthetic fertilizers.

"Was the residue period adhered to before the vegetables were harvested? Our customers are asking so many more questions about the food they consume, how it was produced? Is it organic? The Ministry of Agriculture, Land and Fisheries, and the Caribbean Epidemiology Centre (CAREC) can be very helpful to farmers with all of the above. But farmers must be aware of the changing needs of their final, end customers.… as they’ve considered changes with climate and agriculture, customers are changing as well and so must farmers. This is how I see farmers can be real participants in food production and adding value to the local food chain."

He said preventing food wastage is another key factor in ending world hunger.

"Another way to address world hunger is not to waste or throw away any food. Hunger is alarmingly high in Trinidad and Tobago compared to other nearby/ Caribbean islands. An estimated 100,000 people or 7.4 percent of our population are afflicted with hunger 1. This compares to less than 5 percent in Barbados, 6.2 percent in St. Vincent and the Grenadines, and 5.5 percent for the Latin America and Caribbean region. Yet in Trinidad and Tobago enough food is lost or wasted through retailing (supermarkets, street markets, shops and other retail) alone to end hunger altogether."

"There is a desperate need for initiatives to reduce waste in our twin islands. We are considered by the World Bank4 to be the most wasteful country in the world on the basis of waste generated per urban capita."

"Our involvement in Nourish TT addresses exactly that. We aim to alleviate hunger by ensuring that our stores never throw away food that is still perfectly fit for human consumption. We use Nourish across our stores to donate our surplus, edible food to NGOs that serve the most needy and vulnerable across the country."

"By partnering with Nourish, we harness technology to address hunger at the local level, and act as a force for good in our local communities. By empowering our staff to lead this process, we inspire them to fulfil their inherent drive to be responsible citizens working towards positive social impact. Through these small, yet dedicated daily efforts, we are able to contribute towards a more self-reliant nation and UN Sustainable Development Goals, such as the eradication of extreme poverty and hunger."