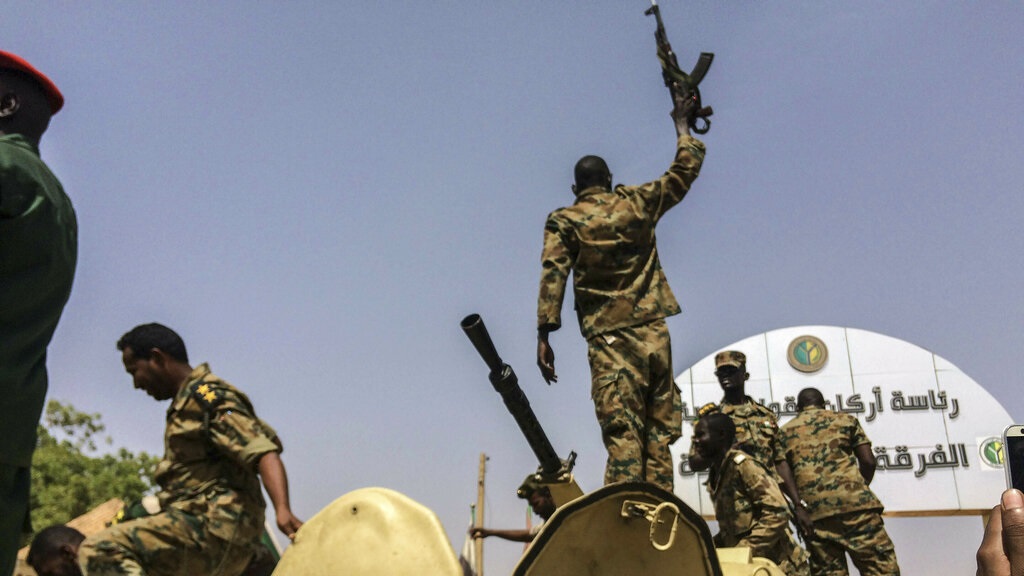 The Sudanese army will not extradite deposed President Omar al-Bashir but will put him on trial at home, before the nation, the military said Friday as it defended its ouster of the longtime ruler, saying it was in response to the demands of the people.

"This was not a coup," Col. Gen. Omar Zein Abedeen told reporters in the capital, Khartoum, but a "tool of change."

Al-Bashir, wanted by the International Criminal Court, faces charges of war crimes, crimes against humanity and genocide for his deadly campaign against insurgents in Darfur, where up to 300,000 people were killed and 2.7 million driven from their homes by militias he backed.

To hand over al-Bashir would be "an ugly mark on Sudan ... even rebels carrying weapons, we won't extradite them," said Zein Abedeen, who has been tasked by the military to lead a political dialogue.

Speaking at a press conference in Khartoum that was broadcast on state TV and flanked by other officers also in uniform, he left open the possibility that a future civilian government in Sudan could extradite al-Bashir to the court in The Hague, Netherlands.

The 75-year-old al-Bashir is in custody, Zein Abedeen said, but declined to provide more details or say where the president of 30 years is being held. He also confirmed that top government members, including the vice president and al-Bashir's associates, are under arrest but didn't give any names.

Zein Abedeen, who is on the military transitional council which took over after overthrowing al-Bashir on Thursday, also insisted the army has no ambition to hold the reins of power for long.

"We came ... to guide the country forward," Zein Abedeen said, apparently trying to reassure Sudanese protesters holding a sit-in outside the military headquarters. The protesters have defied the military, which imposed a state of emergency and a nighttime curfew after it arrested al-Bashir.

He pledged the military would stay on only as long as it's needed, or for a maximum of two years.

Meanwhile, the pro-democracy protesters who spent four months on the streets rallying against al-Bashir, pressed on with their campaign for a civilian government.

Thousands kept up their sit-in outside the Khartoum military headquarters overnight and into the morning, despite the curfew. Organizers said they would keep up the campaign and that they disagree with the army's plans to rule the country for the next two years.

Zein Abedeen did not indicate at the press conference that the army would move against the protesters, but made vague remarks how he would "come out ... sit on the grass" and talk with the demonstrators.

The mood among the crowd appeared festive Friday, with protesters playing music and chanting, "Down again" — a reference to Defense Minister Awad Mohammed Ibn Ouf who announced al-Bashir's ouster on Thursday on Sudanese state TV.

Ibn Ouf, who is on a U.S. sanctions list for genocide in Darfur, was sworn in as head of the new military transitional council, which also includes Zein Abedeen.

The rest of the council is yet to be announced. The Sudanese official news agency SUNA reported that Ibn Ouf postponed this step, pending "further consultations." SUNA said Ibn Ouf would meet with political factions and leaders of the protest movement later in the day.

The U.S. State Department has called on the Sudanese military to "follow the will of the people" and "commit to the speedy handover to civilian rule."

On Friday, the commander of Sudan's feared Rapid Support Force, a paramilitary force, said it would not "accept any solutions rejected by the Sudanese people" and for "opening the door for dialogue" with the protest movement.

The force draws its origins from the Janjaweed militias that were implicated in the Darfur genocide. Mohammed Hamadati, the commander, said talks are needed so Sudan would "avoid slipping into chaos."

In his televised announcement Thursday, Ibn Ouf said also that the military had suspended the constitution, dissolved the government, declared a three-month state of emergency and closed the country's borders and airspace.

Sudan analyst and researcher Eric Reeves described the military's ouster of the longtime president as a "palace coup with al-Bashir as scapegoat."

"The three-month state of emergency is a clear indication that they intend to crush the uprising in this time," he said of the Sudanese military.