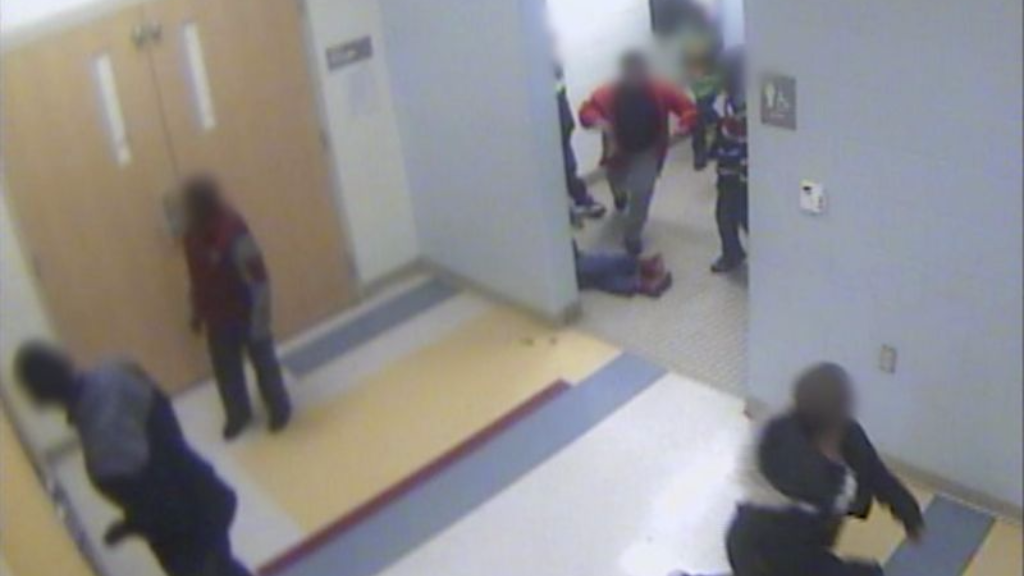 In this still image from a Jan. 24, 2017, surveillance video provided by Cincinnati Public Schools, the legs and feet of 8-year-old Gabriel Taye can be seen as he lies on the floor of a boys' bathroom after being knocked unconscious by another boy at Carson Elementary School. Two days later, Taye hanged himself with a necktie in the bedroom of his Cincinnati apartment.

The death was startling even to the coroner: a boy only 8 years old apparently killing himself in his Cincinnati bedroom.

Now Gabriel Taye's January death is being re-examined after it emerged that he was bullied and knocked unconscious at school two days before he died.

Hamilton County Coroner Lakshmi Sammarco's office has ruled Gabriel's death a suicide, but she said last week that she was reopening the investigation to re-examine the boy's injuries and whether there were contributing factors to his death.

"It was very hard for me to believe that an 8-year-old would even know what it means to commit suicide," Sammarco said.

Suicides are rare among children so young, but not unheard of. Statistics from the U.S. Centers for Disease Control and Prevention show an average of 14 suicides per year nationwide among children 10 or younger since 1999. That compares to over 1,400 per year among 11- to 18-year-olds.

At 8, children generally are just coming to understand death, says Dr. Louis Kraus, chief of child psychiatry at Rush University Medical Center in Chicago. Conceiving of ending their own lives can be even more remote.

"It's possible, but at this young age, it's very uncommon," Kraus said. Even if a child has an idea of suicide, "many kids this young really don't conceptualise the permanency of what they're doing and what could happen."

Experts stress that at any age, suicide is a complex decision that often reflects a combination of life events and psychiatric problems, whether diagnosed or not.

Warning signs can be harder to read in young children than older people, said Dr. Alec Miller, chief of child and adolescent psychology at Albert Einstein College of Medicine in New York. But while kids might not have the vocabulary to discuss depression, it still might show up, perhaps as a change in behaviour or complaints about aches or fatigue with no physical explanation, Kraus notes.

Gabriel had no history of mental health issues, said Carla Leader, a lawyer for his mother, Cornelia Reynolds. People who knew him describe him as a happy-go-lucky kid - "a very loving little boy who always had a smile on his face and would bring a smile to your face," said Carolyn Emery, whose children went to school with him.

Gabriel was at school January 24 when, as seen on a choppy surveillance video the Cincinnati Public Schools system released Friday, he apparently tried to shake hands with a boy who had hit another child. Attorneys for Gabriel's mother said the boy pushed Gabriel into a wall, knocking him unconscious.

An assistant principal arrived about 4 ½ minutes later to look at him. The school system said that it was "concerned about the length of time that (the boy) lay motionless and the lack of adult supervision at the scene" but that administrators followed protocol by having the nurse evaluate him. School officials said the boy told staff he had fainted and never said he had been bullied or assaulted.

They said school administrators asked Reynolds to get Gabriel and take him to a hospital. But her attorneys say she decided on her own to pick him up and take him to the hospital after her sister, who was babysitting while Reynolds was at work, called to say that Gabriel had vomited and was complaining of stomach pains. Doctors concluded he likely had a stomach virus and sent him home.

Two days later, Gabriel hanged himself in his bedroom with a necktie, authorities said.

According to her attorneys, Reynolds didn't learn of the schoolhouse confrontation until her attorneys got a copy of a police investigative file that described the surveillance video.

Suicide online: Facebook aims to save lives with new actions