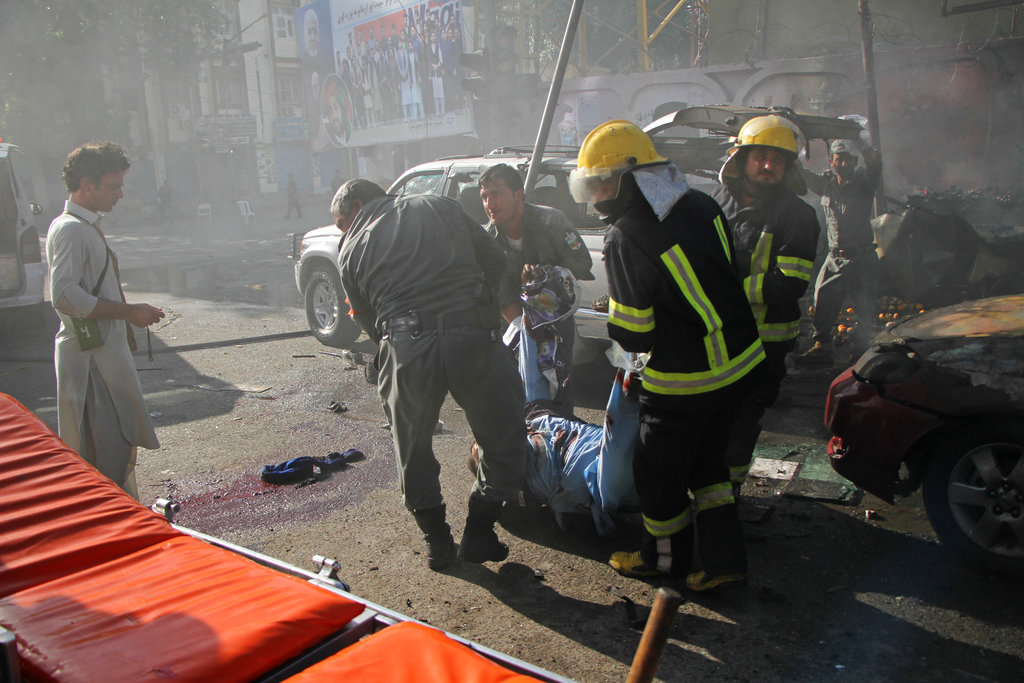 Police and firemen work at the site of a deadly suicide attack in Jalalabad, Afghanistan Thursday, June 7, 2018. A suicide bomber targeted a group of Sikhs and Hindus on their way to meet Afghanistan's president in the eastern city of Jalalabad on Sunday, killing at least 19 people including Avtar Singh Khalsa, a longtime leader of the Sikh community who had planned to run in the parliamentary elections set for October. (AP Photo)

A suicide bomber targeted a convoy of Sikhs and Hindus on their way to meet Afghanistan's president in the eastern city of Jalalabad on Sunday, killing at least 19 people.

Inamullah Miakhail, spokesman for the provincial hospital in Nangarhar, said that 17 out of 19 dead in the attack are from the minority Sikh and Hindu community.

Miakhail added that at least ten of the 20 wounded were also from the same minority community and are undergoing treatment at a Jalalabad hospital.

Narendr Singh, one of the wounded Sikh from Sunday's attack, told The Associated Press by phone from his hospital bed in Jalalabad that the attack targeted their convoy. He cried on the phone worrying what had happened to his father, Avtar Singh Khalsa, who was also in the convoy.

Miakhail confirmed that Khalsa, a longtime leader of the Sikh community who had planned to run in the parliamentary elections set for October, was killed in the attack.

Attahullah Khogyani, spokesman for the provincial governor, said that a number of shops and vehicles caught fire as result of the attack.

Gen. Ghulam Sanayee Stanekzai, Nangarhar's police chief, said that the attacker targeted the group on its way to the governor's compound. They had planned to meet with President Ashraf Ghani, who was visiting the region on Sunday.

No one immediately claimed responsibility for the attack, but the Taliban and an Islamic State affiliate are active in the province.

Sikhs and Hindus have long suffered widespread discrimination in the conservative Muslim country and been targeted by Islamic extremists. The community numbered more than 80,000 in the 1970s, but today only around 1,000 remain in the country. Under Taliban rule in the late 1990s, they were told to identify themselves by wearing yellow armbands, but the dictate was not wholly enforced. In recent years, large numbers of Sikhs and Hindus have sought asylum in India, which has a Hindu majority and a large Sikh population.

In a separate incident, at least 110 people have been hospitalized after drinking from a river in the northern Parwan province, an official said.

Abdul Khalil Farhangi, the head of the main hospital in Charakar, the provincial capital, said it was not clear what caused them to become ill. The symptoms included vomiting and headaches.

Afghanistan's infrastructure has suffered from decades of war, and many rural communities do not have access to electricity or clean running water.

11 bodies, 10 of them hanging, found at New Delhi home