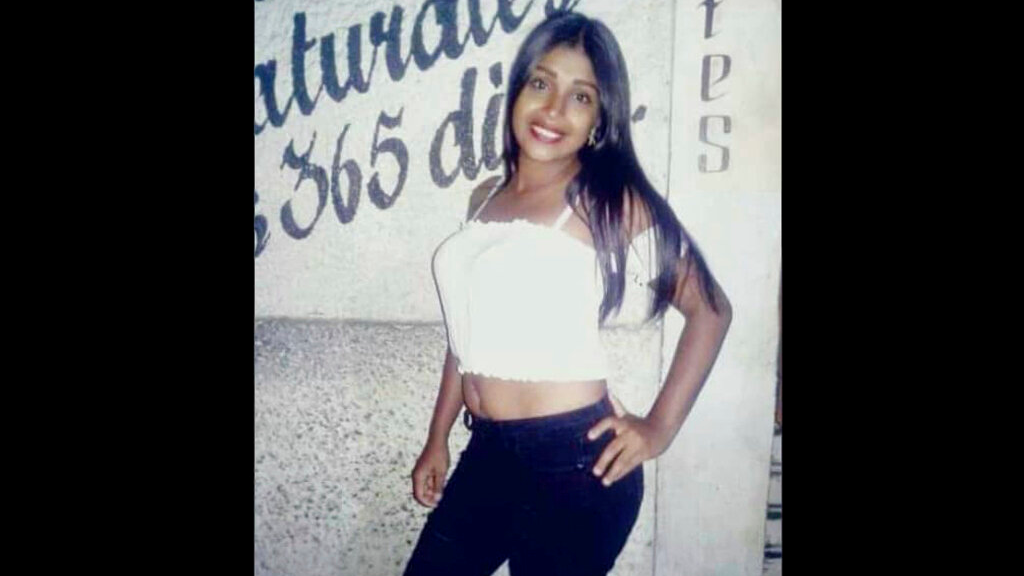 In this Jan. 2019, photo provided by Luisa Garcia, mother of Yubreilys Merchán, shows Merchan in Güiria, Venezuela. Merchán, a 23-year-old hairdresser, survived when the wooden boat carrying her and other Venezuelans, mostly women, sank on its way to Trinidad early Wednesday, April 24, near the Venezuelan island of Patos, 5 miles from a peninsula in the Venezuelan state of Sucre. (Carmen Garcia via AP)

As a small boat packed with Venezuelans capsized in Caribbean coastal waters this week, Yubreilys Merchán found herself with seconds to react.

In a desperate bid to survive, the 23-year-old hairdresser stripped off her clothes to lighten her weight before plunging into the water amid cries of panic. Then, she began swimming toward a nearby island, a skill she learned from her mother as a child.

When she and another companion finally reached a rocky coast in the middle of the night, they clambered over boulders and collapsed in an embrace, crying with relief after realizing they were safe.

"That was a miracle, an incredible thing, like something out of a movie," said Merchán's mother, Luisa García, who related the episode in a telephone interview with The Associated Press on Friday.

The traumatic experience of both survivors highlights the increasingly perilous risks that Venezuelans are taking to leave the country after years of dire economic conditions.

While the majority of Venezuelan migrants have travelled by land into neighbouring Colombia and Brazil, overloaded fishing boats sometimes smuggle people toward an uncertain future on nearby Caribbean islands. Some women turn to prostitution on arrival, according to Merchán's mother, who lives in the Caribbean nation of Trinidad and Tobago.

The wooden boat carrying her daughter and other Venezuelans, mostly women, was headed to Trinidad early Wednesday when it sank in strong waves near Venezuela's Patos island, about 5 miles (8 kilometres) from a peninsula in the state of Sucre. Local fishermen rescued nine people and recovered the bodies of a man and a 16-year-old girl.

Another 23 passengers are missing in the deadliest accident involving a boatload of Venezuela migrants in years.

But as the days passed, hopes that other passengers would be rescued appeared increasingly slim.

García waited for any news of her daughter for more than 24 hours. She used a local expression to describe her immense relief when Merchán's husband called to tell her that the eldest of her three children was alive.

"My soul returned to my body," said 44-year-old García.

She said Merchán's husband arrived on Patos island a day after the sinking and took her back to Venezuela, thanks to a fisherman's boat involved in the search.

Merchán is currently being treated in a hospital in the Venezuelan city of Guiria after suffering burns on her leg from boat fuel that caught fire, as well as an eye injury, according to García.

But she said her daughter was one of the lucky ones.

Like many others in Venezuela, residents of Guiria in Sucre state are struggling to get by as incomes and work opportunities become scarce. Hospitals are short on medication and equipment, while power outages are routine amid nationwide blackouts.

More than 3 million Venezuelans, or one-tenth of the population, have left the country in recent years — preferring to risk perilous journeys across land and sea over the prospect of life without basic goods.

In January 2018, another boat carrying migrants crashed onto rocks on the nearby Dutch island of Curacao, killing at least four.

Meanwhile, a steady flow of migrants continues to take their chances amid a debilitating standoff between the government of President Nicolás Maduro and U.S.-backed opposition leader Juan Guaidó.

García said many residents of Guiria have travelled to Trinidad and Tobago over the years, paying boat captains and traffickers to escape the hyperinflation and shortages of necessities.

But she said Merchán is unlikely to make a similar attempt to leave again.

"I don't think my daughter wants to come after what she has gone through," she said.