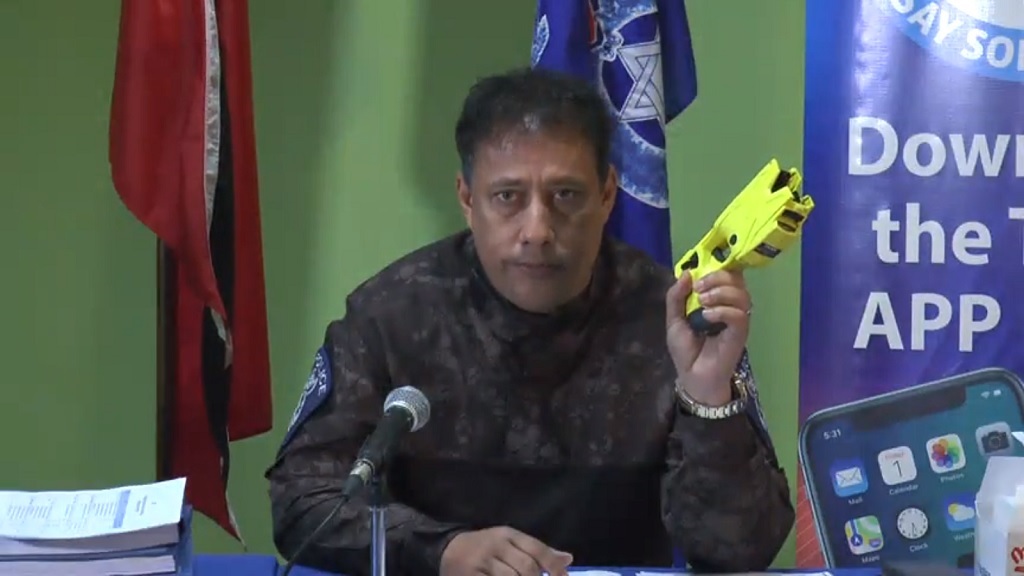 Police Commissioner Gary Griffith said a suspect ‘made history’ after becoming the first person to be tasered by police earlier this week.

Speaking during a media briefing on Thursday, Griffith said the suspect was apprehended and taken into custody following an incident in which the glass screen of an ATM machine was smashed.

Griffith said officers from the Inter-Agency Task Force were on mobile patrol in a marked police vehicle in South Quay near the PTSC bus terminal when the incident occurred.

Griffith said the officers learned that a security guard on duty, and others, were pursuing someone and were told that the person had damaged the glass section of a bank ATM machine.

He said officers cautioned the individual and the person allegedly replied: “Officer allyuh have to shoot me here”.

He said the officers warned him again and he ran and sat in the driver’s seat of a car and shouted: “I go kill these people in this car, allyuh police leave me alone”.

Griffith said that if the officers only had firearms in their possession, they would have been forced to use that on the suspect, as those would have been the only tools available at the time.

However as they had Tasers in their possession, they were able to use that to neutralise the suspect.

“It’s reported that he posed a threat to the officers and the passengers in the vehicle. The police officer, through the minimum use of force policy…in this situation, officers used a taser. The individual, after being hit by the taser, shouted “allyuh have to shoot me with real bullets”, shouted to the police officer “shoot me, shoot me”.

He said officers used the taser again, after which the person ‘went silent’.

He said officers then arrested the man and took him into custody without any significant injuries.

“With minimum use of force, there was no permanent injury to the individual.”

"So, first individual, he has created history, (having been apprehended) using this equipment."

Griffith contrasted this with an early morning operation in which officers carried out an operation in Morvant on Thursday morning, where they were forced to fire at a suspect after they were fired upon.

He said police returned fire in accordance with the appropriate use of force policy and the man succumbed to his injuries.

Officers said an assault weapon was found along with a grenade and other items in the house where the suspect, who was known as 'Menace', was killed.

Griffith again called for legislation to be amended whereby anyone found with assault weapons be denied bail.

He added that all officers attached to the Emergency Response Patrol team have been trained to use tasers.

TTPS: Tasers not for the untrained