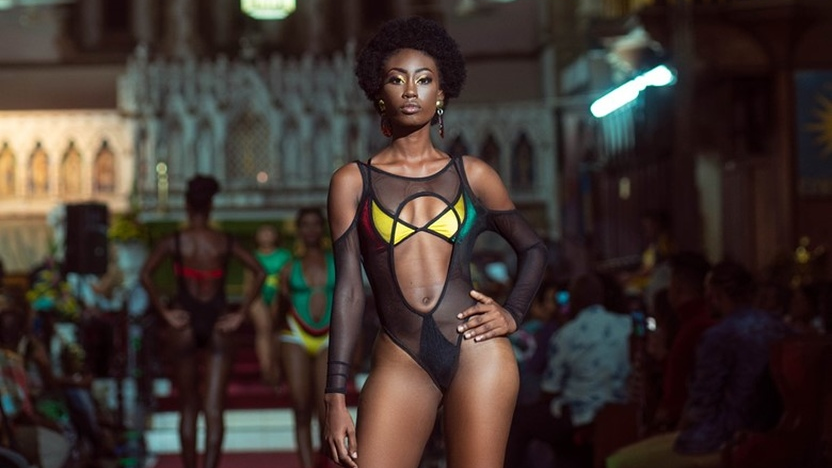 A model in Genesis Swimwear at StyleWeek 2019 held at the Holy Trinity Cathedral in Port-of-Spain. Photo: Nigel Reid.

Reverend Shelley-Ann Tenia, Dean of the Holy Trinity Cathedral, said one designer flouted guidelines given to them for the now controversial fashion show held over the weekend.

The Anglican Cathedral in Port-of-Spain has been under the spotlight since photos emerged on social media of swimsuits being modelled on the last day of StyleWeek.

Tenia said they were approached by StyleWeek a month ago to host the three-day fashion event and when the proposal was presented, she and the Vestry, the committee that oversees church business, met to discuss it.

“The Vestry agreed and we took a while to pray and think about it and consider all possibilities before we said yes,” she said.

She said they gave the StyleWeek Organisers clear guidelines, especially for the swimsuit presentations.

“We said we need to be very clear how we deal with it. I said I am okay once I see no bumcees or boobs and if anyone has anyway that makes that impossible then they need to not show it or use wraps and sarongs and the models must have on leggings,” she explained.

Tenia said there was someone positioned backstage to monitor the models and ensure guidelines were being adhered to but, on the final day which showcased swimwear, the person stepped away for a bit and the designer, who she did not name, flouted the guidelines.

“Of the 15 designers, one of them flagrantly disregarded that. The last item was three Carnival costumes and they followed our instructions,” she said.

Ellis Briggs, spokesperson for the organisers of StyleWeek Zetick Caribbean, confirmed there were guidelines.

"I am meeting with the designers to discuss this and other matters. We will also be discussing the next event which is StyleWeek St Vincent and we will have to put things in place going forward to ensure rules and guidelines are adhered to," he told Loop.

Stating that she attended two of the three days of the show, Tenia said some of the items presented were edgy and provocative - but were decent.

She said the decision to host StyleWeek was done for the church to partner with something that is relevant as the event is aimed at providing a platform for lesser-known designers, and to raise the church’s profile with a wider audience.

She said this is the strategy as the church embarks on its restoration exercise.

“The restoration is upon us and people need to be aware. We are letting people see and understand we have to do fundraising for the Cathedral.  We have a team putting together a find raising process and platform. The Cathedral is a fantastic venue for all things creative and we want people to see the building, let them notice and recognise it,” she said.

In August 2018, the Holy Trinity Cathedral sustained damage when a 6.9 magnitude earthquake struck.

Emergency repairs at a cost of over one million dollars were done but the church is embarking on a five-year restoration project to be completed in four phases. Among the works done were the removal of a stone slab in the lower eastern roof, removal of filials, spires and the globe and cross on the Belltower, repair of roof leaks and guttering and repair of the organ pipes.

The first two phases, which are estimated to cost $44 million, according to a release, would be focused on structural works that would eliminate water ingress to the building and address termite infestation.