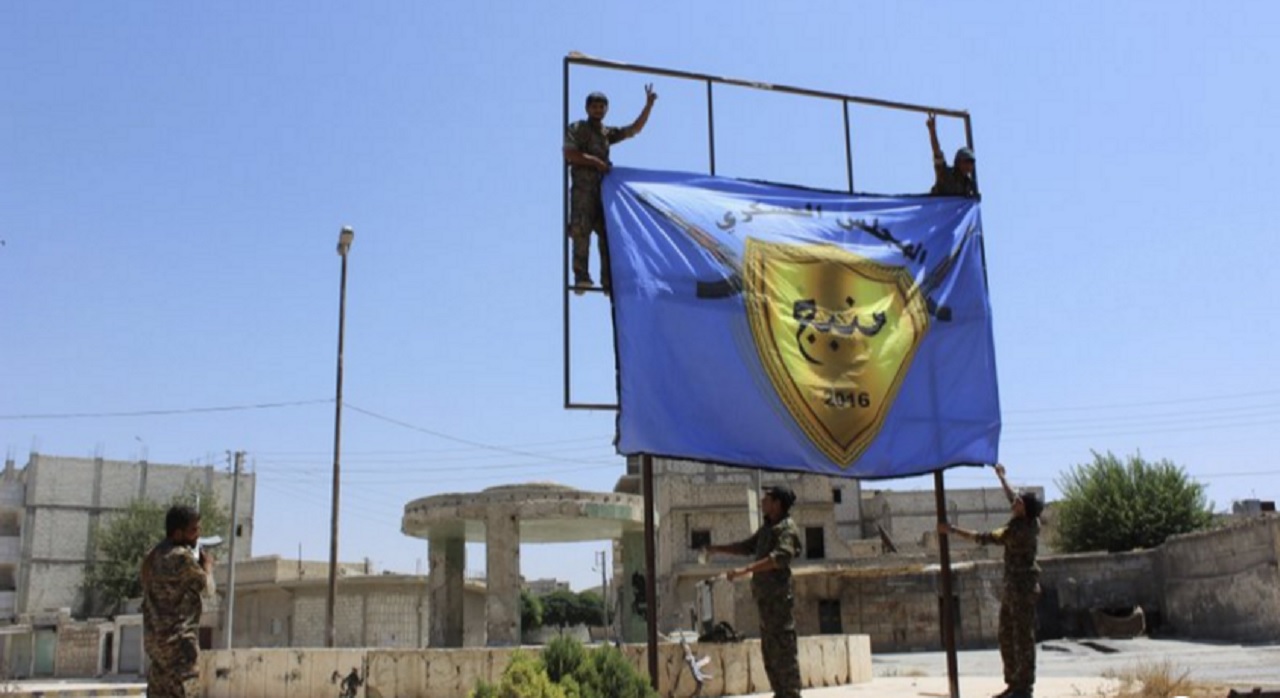 In this file photo released on Aug. 8, 2016 by Hawar news, the news agency for the semi-autonomous Kurdish areas in Syria (ANHA), shows Kurdish-led Syria Democratic Forces raising their flag after driving Islamic State militants out of the area, in Manbij, Syria.

Syrian Kurdish fighters on Wednesday welcomed the Trump administration’s announcement that it will provide them with heavier arms in order to battle the Islamic State group, but NATO member Turkey, which views the main Syrian Kurdish militia as terrorists, says every weapon the Americans give them is a “threat.”

The dispute could ignite more fighting between the two key American allies in the battle against the extremist group as Syrian Kurdish forces gear up for a major operation to drive the militants from their de facto capital, Raqqa.

But Turkish Foreign Minister Mevlut Cavusoglu slammed the move, saying “every weapon that reaches their hands is a threat toward Turkey,” and that Turkey’s president would raise the issue during a visit to Washington planned for next week.

The Syrian Democratic Forces, which have driven IS from much of northern Syria over the past two years with the help of U.S.-led airstrikes, are among the most effective ground forces battling the extremists.

Ankara says the Kurdish militia known as the YPG, which forms the backbone of the force, is an extension of the Kurdistan Worker’s Party, or PKK, which has been waging a decades-old insurgency in Turkey and is considered a terrorist group by Turkey, the U.S. and other Western countries.

She said the decision is likely to be met with “aggression” from Turkish President Recep Tayyip Erdogan, who is to visit Washington next week.

Turkish Prime Minister Binali Yildirim meanwhile told reporters that Turkey cannot accept “direct or indirect” support for the PKK, and that the U.S. should not try to use one terrorist group to defeat another.

“We will work together, we’ll work out any of the concerns. I’m not concerned at all about the NATO alliance and the relations between our nations,” he told reporters, as he toured a NATO training site outside Vilnius, Lithuania.

“It’s not always tidy, but we work out the issues,” he added.

The SDF’s rapid advance against IS last year prompted Turkey to send ground forces across the border for the first time in the more than six-year-old civil war to help allied Syrian forces battle IS and halt the Kurds’ progress.

Since then, Turkey is believed to have positioned more than 5,000 troops in northern Syria, and has escalated its airstrikes and cross-border artillery attacks against Kurdish forces.

A Turkish air raid in late April killed 20 YPG fighters and media officials, prompting the U.S. to deploy armored vehicles along the border in a show of support for the group.

Canikli expressed hope that Washington would reverse its decision, saying “there is no truth to the claim that the fight against Daesh can only be successful with the YPG.” Daesh is the Arabic acronym for IS.

UN: Up to 245 missing after 2 Mediterranean shipwrecks