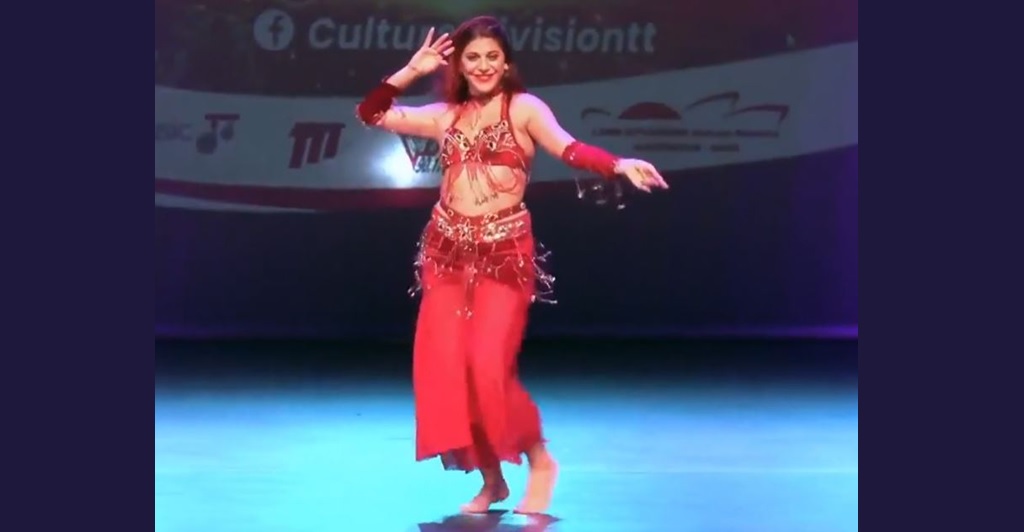 Rebecca Elias Griffith during her belly dancing performance at the Culture Division’s Colours of Consciousness Concert on Friday, September 18.

The Ministry of Tourism has issued a statement marking Syrian, Lebanese heritage celebrated during National Patriotism Month which runs from late August to September 24.

According to the release, what is believed to be the last major group of immigrants to colonial Trinidad ventured from the Middle East in the early 20th century seeking refuge from the region’s political and economic turmoil.

To support their families both in Trinidad and back at home, the men peddled dry goods while the women, many of whom were expert seamstresses, sewed shirts and other clothing.

The growing community, armed with strong family values and the knowledge of operating silk and wool factories, reportedly played a pivotal role in developing this country’s textile industry and business sector.

Last week, T&T’s Syrian and Lebanese heritage was celebrated through an educational interview on two dance styles, one of which was featured at the “Colours of Consciousness” Concert last Friday.

Michelle Hadeed, Cultural Chairperson of the Syrian/Lebanese Women’s Association, provided a comprehensive overview of the Dabke Dance and Bellydancing; the latter of which has been popularised through film and television.

The origin of the Dabke dance provided valuable insight into the values of the Syrian/Lebanese community.

Hadeed, a second and third generation Syrian descendant, said the dance translates to “stamping of the feet” and represents community harmony.

“The dance originated between the 18th and 19th century when homes were built from mud. Due to exposure to the elements, cracks appeared in homes and the community came together to repair these fissures by stamping the mud until the fissures were repaired. To keep each other warm as the time passed, they will sing songs to accompany their feet movement. This dance of solidarity and unity is evident today at celebratory events such as weddings and other special occasions, inherited from generation after generation,” the statement said.

Belly dancing was the second style discussed during the interview, which is another celebratory performance. A female dancer accentuates the beat of Arabic music with her hips, while her arms frame these movements with accompanying gestures.

At formal performances the dancer is usually dressed with a long flowing skirt or pants, fitted top, embellished with coins, jewels and sequins.

Rebecca Elias Griffith, a well-known local belly dancer under the banner Lebanese Dance Rhythms, performed at the Ministry’s Concert last Friday “with a stunning display of grace and beauty”, the release said.

“These dances embody the spirit of National Patriotism Month, a campaign which seeks to educate, entertain and engage audiences through explorations of our cultural diversity,” it ended.