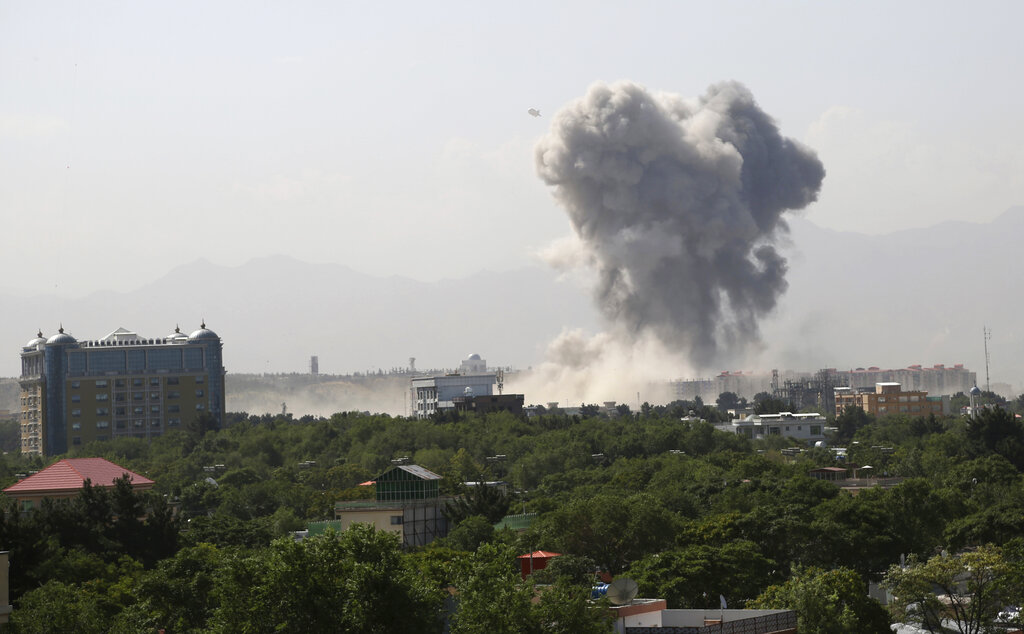 The Taliban set off a powerful bomb in downtown Kabul on Monday, killing at least one person and wounding more than a hundred, and sending a cloud of smoke billowing over the Afghan capital.

At least 26 children were among the wounded, many of whom were cut by shards of glass when the bomb shattered nearby windows, government spokesman Feroz Bashari said. He said a total of 105 people were hurt.

The Taliban claimed the attack, which came as the insurgents were holding their latest round of talks with U.S. envoy Zalmay Khalilzad in the Gulf state of Qatar, where they have a political office.

The insurgents struck during the morning commute, and ambulance sirens wailed across the downtown area.

Mohammad Karim, a police official in the area of the attack, said a car bomb exploded outside a Defense Ministry building. Militants then ran into a nearby high-rise located in a crowded market and began firing down on the ministry. Police and special Afghan security forces poured into the area and cordoned it off.

Mohammad Farooq, the owner of a nearby restaurant, said the explosion blew out the windows of a private school, wounding several students.

The capital has been relatively quiet in recent months following a spate of bombings, many claimed by the local Islamic State affiliate. The Taliban have carried out scores of attacks in Kabul in recent years, mostly targeting Afghan and U.S. military installations or convoys.

Pakistan condemned Monday's attack, saying "such attacks are detrimental to the cause of peace, security and stability in Afghanistan." Pakistan and Afghanistan routinely exchange accusations of harboring the other's militant enemies.

Pakistan has reportedly pressed the Taliban __ many of whom have homes in Pakistan __ into talks. Last week it hosted Afghan President Ashraf Ghani for the first time as the two countries sought to reset their troubled relationship.

The latest talks between the United States and the Taliban meanwhile stretched into a third day. The Taliban said their focus is on getting an announcement of a timetable for the withdrawal of U.S. and NATO troops from Afghanistan. The announcement is likely to be accompanied by a Taliban promise to hold intra-Afghan talks and agree to an eventual cease-fire.

Suhail Shaheen, spokesman for the Taliban's political office in Doha, told The Associated Press on Monday that "our main concern is to make sure a timeline for troop pullout is announced."

Taliban officials have previously told the AP they want all foreign troops withdrawn within six months, while Washington has pushed for a longer timeline of a year to 18 months.

The Taliban have refused to hold talks with the Afghan government, calling it a U.S. puppet, and have continued to carry out daily attacks on Afghan forces. They say Washington is the final arbiter on the troop withdrawal, which the insurgents see as the central issue.

Washington accelerated attempts to find a negotiated end to America's longest war with the appointment last September of Khalilzad, who was a special presidential representative to Afghanistan and later U.S. ambassador in Kabul in the years immediately following the 2001 U.S.-led invasion that ousted the Taliban.

During a visit last week to the Afghan capital, U.S. Secretary of State Mike Pompeo said Washington would like to see an agreement before Sept. 1, considered an ambitious deadline by analysts but likely linked to Afghan presidential polls scheduled for later that month. Washington has expressed concern the elections could hamper a peace deal and has quietly advocated for an interim administration for up to two years following an agreement.