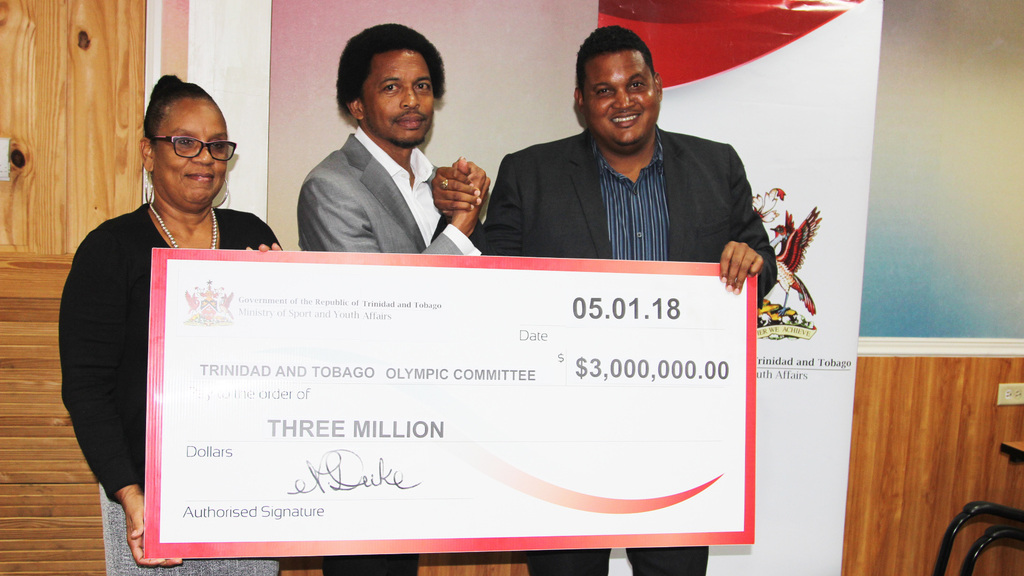 The Trinidad and Tobago Olympic team has been assured government participation in at least three multisport Games in 2018, thanks to an injection of funding from the Ministry of Sport & Youth Affairs. At a presentation last week, the Trinidad & Tobago Olympic Committee (TTOC) received $3 million towards the country's participation at the Commonwealth Games in Australia in April, the CAC Games in Colombia in August, and the Youth Olympic Games in Argentina in October.

TTOC President Brian Lewis thanked the Ministry for its continued support, saying "Given the harsh economic climate, it is important that the Government renews its commitment to the nation's athletes. Not only is this a contribution to sport and those who have dedicated their lives to it, but it is also a demonstration of the value the Government places on the tangible and intangible benefits of participation in sport at the highest level."

Honourable Darryl Smith, Minister of Sport & Youth Affairs, also speaking at the presentation indicated that the Ministry wants to ensure that the athletes' hard work to prepare for international competition is not in vain.

"We have always maintained our athlete-centred approach to sports administration and this contribution to the effort is no different. Trinidad and Tobago's athletes have proven their worth time and again on the international stage and it is incumbent on the Government to provide the necessary support.

There's also no greater feeling for us as citizens than to see the national flag represented and to revel in the success of our athletes when they mount the podium. After our gold and silver medals at the World Championships last year, we're hoping for a lot more of that glory from our athletes in 2018 at the Commonwealth and CAC Games."

Minister Smith also stressed that the support from Government must be supplemented by the corporate sector in order for other pressing needs of the athletes to be met. "I continue to encourage the business community to see sports funding as an investment in the youth of the country and a contribution towards the industry of sport. There is a lot to gain from associating your brand with a successful athlete or team. What better team to get behind that Team TTO?"