Dr Tewarie calls for marriage with consent for 16-year-olds 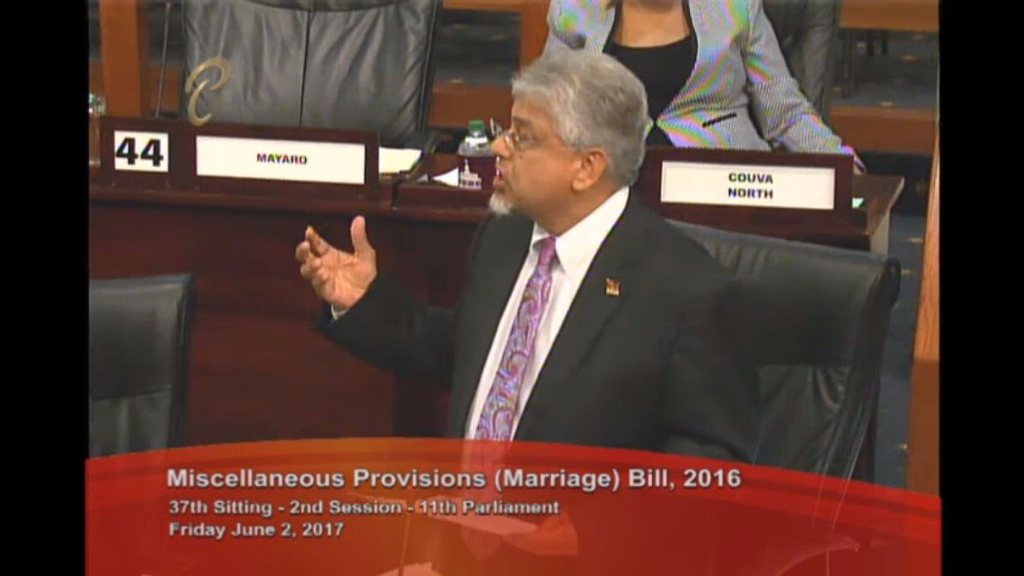 Opposition Senator Dr Bhoendradatt Tewarie says is calling for an amendment to be made to the Miscellaneous Provisions (Marriage) Bill 2016, for 16-year-olds to be allowed to marry, with the consent of parents or guardians and the courts.

Speaking in Parliament on Friday during the discussion of the Bill, Dr Tewarie said he supports marriage at the age of 18, however, he said this should include the amendment in order to include special cases.

"Let us show some sensitivity to the public interest and to historical antecedents. We would like to recommend 16-year-olds with parental consent and judicial intervention/scrutiny. It's not going to be a thousand cases...it's likely to be not more than 20 or 30 cases in any given year over any religious denomination," he said.

He added that the Bill should require a three-fifths majority in order to properly represent the views of the Opposition.

"I believe he should include the three-fifths majority. Let us debate it," he said.

He added the Bill does not address other issues such as abortion, domestic violence, violence against children, gay or transgender marriages, education or the attitudes toward marriage.

"It does not address the reality of family disintegration which is the one source of never-ending evolutionary chaos in the society of Trinidad and Tobago and the entire Caribbean."

He said however that he has no issue with raising the national marriage age to 18.

“I’m against child marriages, forced marriages and the interfering with underage girls by big men,” he said.

Dr Tewarie also mentioned calls by various groups such as the Hindu Women’s Organisation (HWO)and Islamic Ladies’ Social and Cultural organisation, who have asked for the marriage age to be 16 with parental supervision and judicial scrutiny. HWO also suggested that where females are 16, the male’s age should be no more than 19 years.

"I like secular democracy...(But) that does not mean that religion does not affect it. We've got to find the means and ways to be sensitised in order to live in harmony together," he said.

Senator Fitzgerald Hinds, however, disagreed with this stance, quoting two Biblical verses which discussed the seriousness of marriage.

“Once it requires parental consent, it implies that a 16-year-old is unable to make a solemn decision...maturity in most cases comes a little bit later," he said.

He said child marriage and inequality among sexes is no longer acceptable in today’s world and that Attorney General Faris Al-Rawi’s decision to remove the three-fifths majority provision in the bill was, “done on the basis of legal authority.”

Hinds said that he wished Tewarie would “get off his high unconstitutional horse and settle down behind the law and best practice.”

Carmonas: women must stop shaming each other, child marriage must come to an end