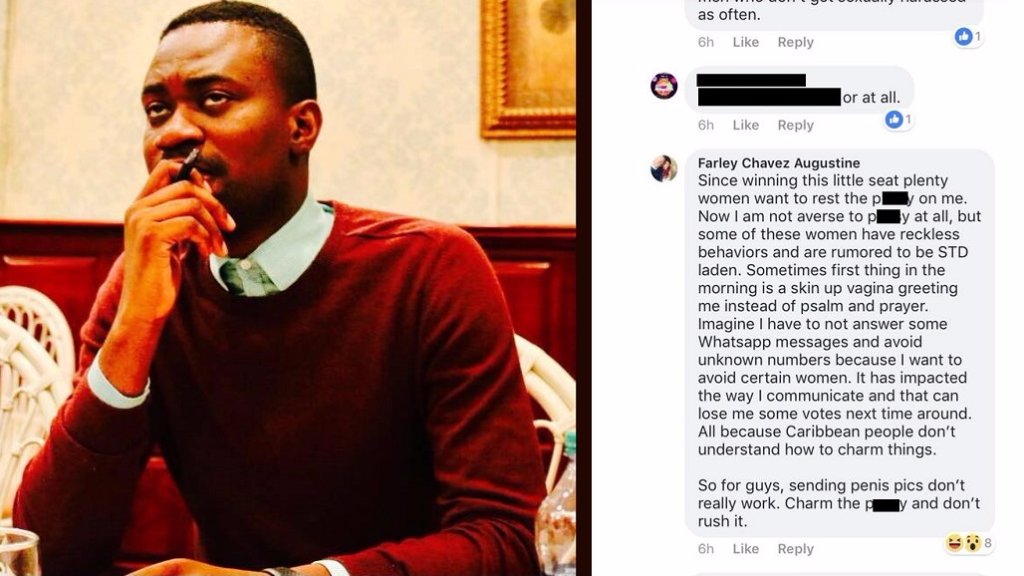 Tobago assemblyman Farley Augustine apologised for comments he made online in which he slammed women who allegedly wanted to "rest the p***y" on him and sent inappropriate photos and on social media.

The Parlatuvier/L' Anse Fourmi/Speyside representative commented on a Facebook post initially defending his comments, which were made on a friend's post regarding cricketer Chris Gayle, who was accused of exposing himself to a massage therapist in 2015.

Augustine said that he, too, had been sent unwanted illicit photos.

"Since winning this little seat plenty women want to rest the p***y on me. Now I am not averse to p***y at all, but some of these women have reckless behaviours and are rumoured to be STD laden. Sometimes first thing in the morning is a skin up vagina greeting me instead of psalm and prayer. Imagine I have to not answer some Whatsapp messages and avoid unknown numbers because I want to avoid certain women. It has impacted the way I communicate and that can lose me some votes next time around. All because Caribbean people don’t understand how to charm things. So for guys, sending penis pics don’t really work. Charm the p***y and don’t rush it," he said.

After the comment was the subject of a news report, Augustine initially defended his comments, saying that neither men nor women should send inappropriate photos online. 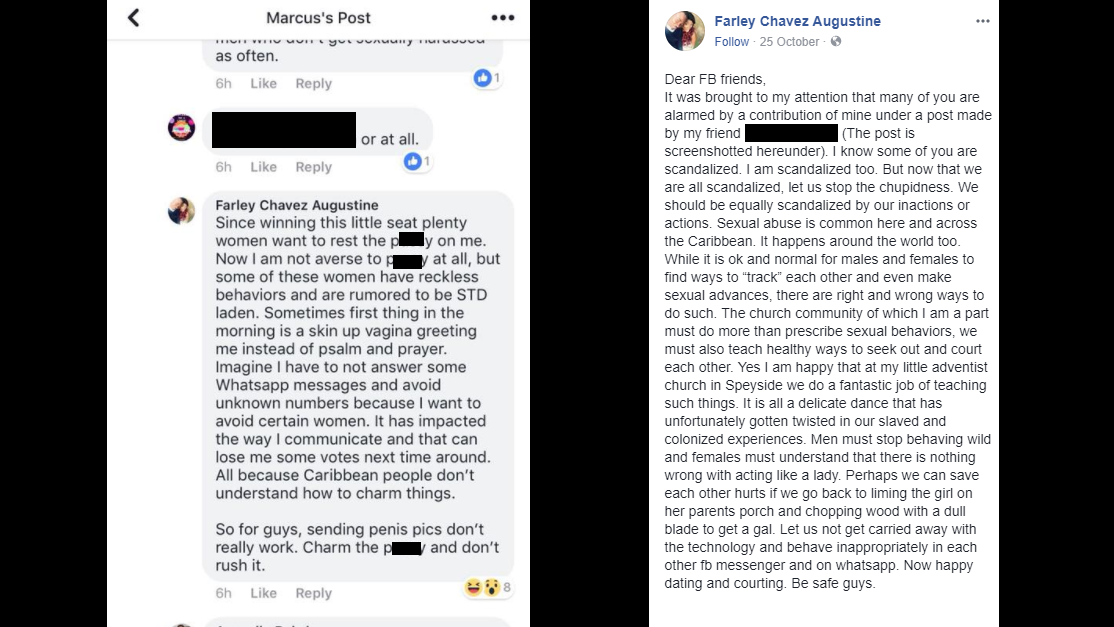 "It was brought to my attention that many of you are alarmed by a contribution of mine under a post made by my friend. (The post is screenshotted hereunder). I know some of you are scandalized. I am scandalized too. But now that we are all scandalized, let us stop the chupidness."

"We should be equally scandalized by our inactions or actions. Sexual abuse is common here and across the Caribbean. It happens around the world too. While it is ok and normal for males and females to find ways to “track” each other and even make sexual advances, there are right and wrong ways to do such."

"The church community of which I am a part must do more than prescribe sexual behaviours, we must also teach healthy ways to seek out and court each other. Yes I am happy that at my little Adventist church in Speyside we do a fantastic job of teaching such things. It is all a delicate dance that has unfortunately gotten twisted in our slaved and colonized experiences."

"Men must stop behaving wild and females must understand that there is nothing wrong with acting like a lady. Perhaps we can save each other hurts if we go back to liming the girl on her parents porch and chopping wood with a dull blade to get a gal. Let us not get carried away with the technology and behave inappropriately in each other FB messenger and on WhatsApp. Now happy dating and courting. Be safe guys."

Speaking with media on Friday however, Augustine has since issued an apology for his comments, saying he did not mean to use such language.

He said he has since had discussions with his church and his political leader regarding his actions.

People magazine features Tobago-born actor in "Ones to Watch" issue