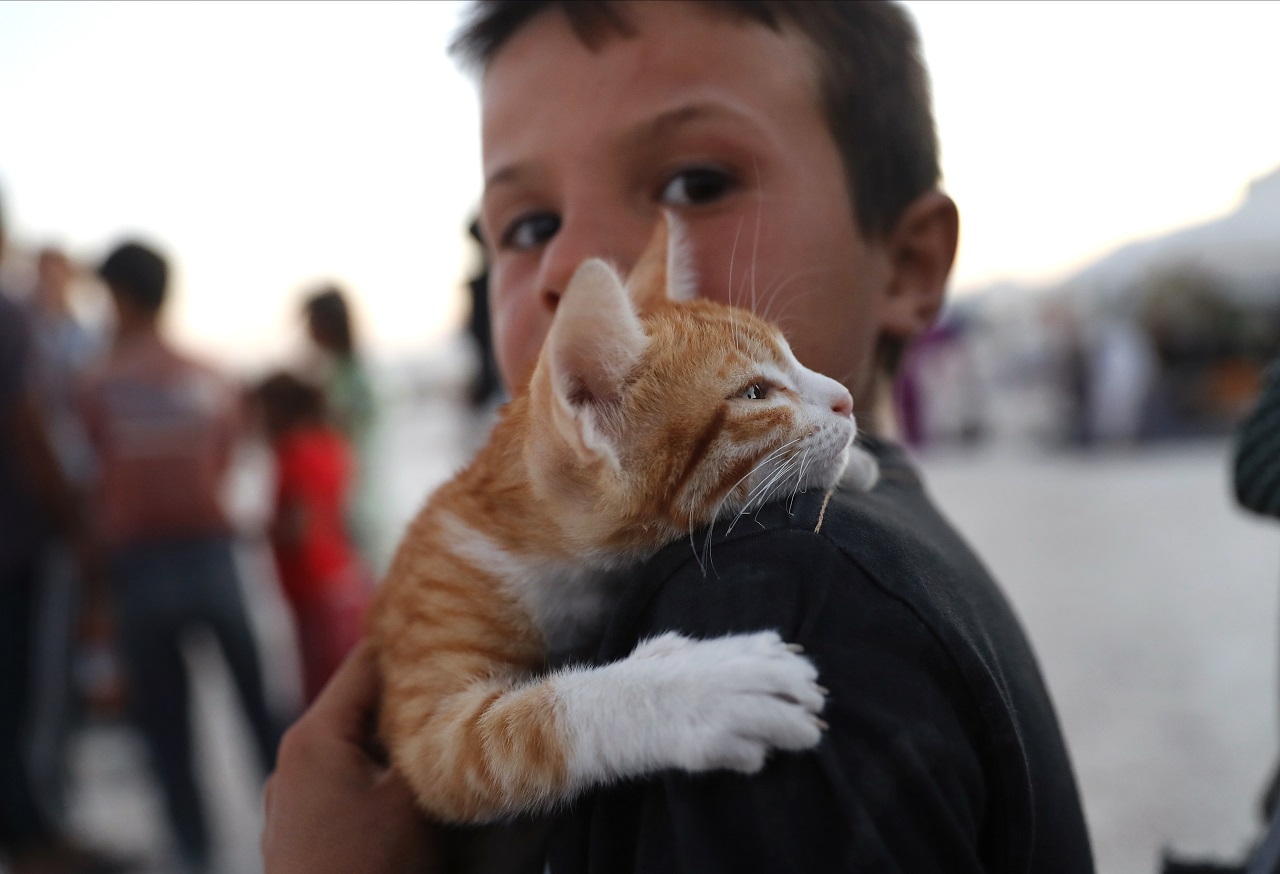 A Syrian displaced boy who fled with his family from the battle between U.S.-backed Syrian Democratic Forces and the Islamic State militants from Raqqa city, carries his cat at a refugee camp, in Ain Issa town, northeast Syria, Wednesday, July 19, 2017.

They have escaped their hold, but displaced residents of Raqqa still fear the militants of the Islamic State group, terrified they will return and seek revenge for defeats.

In one of the largest camps housing those who fled the northern Syrian city, survivors of the group's terror machine cannot shake off the horrors they witnessed in the group's self-declared capital. They described public killings, hangings, people thrown off roofs and other punishments for the slightest offenses.

For children, what they saw or heard of is engrained into their minds like horrific fairy tales.

One girl around 12 years old described how women accused of stealing were immersed in boiling oil. With an air of excitement, she acted out the women being slid into a vat. Then another girl, slightly older, interjected to correct her and said, no, she had actually seen it and just the women's hands were plunged into the oil.

A 10-year old girl chimed in, saying fighters scolded her for wearing a red T-shirt.

"We were living under unimaginable psychological pressure, God only knows," said 39-year-old Fatima Mohammed. "There was a state of terror inside every home."

Mohammed said one scene set the tone for her for the three years under IS rule: a 14-year old who had been accused of theft begging for his life as a militant raised a sharp knife over his head in a public square.

"He kept saying I am innocent," she said. The boy tried to fend off the knife with his hands, she said, then the fighter finally shot him twice in the head.

"I could not bear it anymore," she said.

The next time a young man tried to break away from the group's grip, Mohammed risked it all to save him, and helped him escape.

Nearly a dozen people spoke at the camp in Ain Issa, a town about 50 kilometers (31 miles) north of Raqqa. Most of those asked to be identified by their first name or no name at all, fearing IS retaliation against themselves or their families. Most of them fled within the past three months as U.S.-backed Syrian fighters have battled their way into Raqqa.

The Islamic State group enforced its radically bloody version of religious rule across the so-called "caliphate" it declared in Iraq and Syria.

Iraq's larger Mosul and Syria's more resource-rich Deir el-Zour were important administrative and economic hubs; but Raqqa stood out as the model where the group sought to impose most purely its stringent vision of "public morality," interfering in the smallest details of people's lives.

The resulting terror has been entrenched in the local population. The escaped residents said that many of the Islamic State group's members were fellow Raqqans. They said they feared IS members could be among the displaced people and could threaten them or their loved ones.

A resident who asked only to be identified by his first name, Abdullah, said he survived IS rule by "toeing a straight line."

"When you see a (person) being beheaded in front of you, won't you be scared?" Abdullah said. He said many people, including him, had expected good things from a group that said it would observe religion and mete out justice. It was a year before he lost faith in them.

Now he fears that Raqqa residents who joined IS will seek vengeance against those who turned against the group. "Many people are still with them," he said. "They have a very strong security apparatus." He fears for relatives living in villages closer to Raqqa than Ain Issa where the militants could return.

The United Nations estimates that about 190,000 residents of Raqqa province have been displaced since April, including about 20,000 since the operation to seize the provincial capital began in early June. Most of the displaced stay within Raqqa province.

Abdel-Meguid Suleiman, a father of four who got to the camp only days earlier, said he didn't have the means to pay for smugglers to leave Raqqa, where he worked as a day laborer.

"It was like a dream," he said joyously, describing his escape, crossing the Euphrates River with his children and extended family to safety amid militant's sniper fire. A senior IS member was his neighbour and told him to flee the city or he would have to execute him.

But for him, the group has the terrifying air of invincibility. "It will be almost impossible to penetrate Raqqa," he said of the U.S.-backed assault on the city. "They have made very tight reinforcement."

One woman who covered her face as she spoke to the AP joined a crowd that gathered to extoll the group's horrors.

Halima al-Hamouda, a 32-year-old mother of four, said her then-12-year-old daughter was harassed by an IS nurse who asked her to marry a fighter of the group. Her son, now 12, was taken to the police station for wearing jeans and he and his father reprimanded. She herself was flogged for showing her hands, breaking rules that she cover from head to toe in dark colors.

"It was a man that carried out the 20 lashes," she recalled, bristling at how she had to bend before him to beat her back.
But it was the story of her neighbours that broke her heart.

She said a boy was thrown off the roof after another neighbour reported him as being gay to the IS's morality police. The boy's father is now working to save money to return to Raqqa to get his vengeance against the neighbour, she said.

Assad says US troops welcome in Syria to fight terrorism