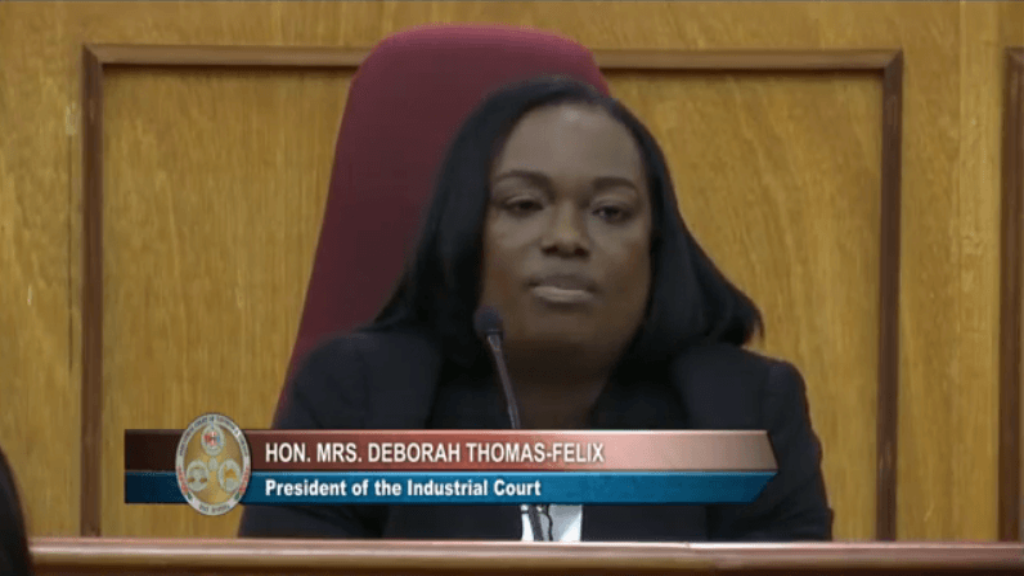 The Industrial Court is fair in its judgments and does not favour worker nor employers.

This is the message Industrial Court President Deborah Thomas-Felix stressed during her address for the opening of the 2019-2020 law term on Tuesday.

Noting that the Court has faced criticism in recent times, Thomas-Felix warned against persons calling the Court's integrity into question.

"I have noted with interest that the thinking which has been very public lately is the thinking that the Industrial Court does not allow employers to “fire” workers," she said.

"This in my mind shows a lack of understanding of the work of the Court."

Thomas-Felix said the Court upholds the decision of employers who fire workers, once employers follow the process stipulated by the laws of this country.

"This is not an exception, it is the norm. When the dismissal of a worker is regular, lawful and it is done in accordance with the principles and practice of good industrial relations and the laws of the country, the Court always upholds these decisions," she stressed.

"It is therefore very misleading to say that the Industrial Court does not allow employers to ‘fire’ workers."

She added that anyone who disagrees with the Court's decision in their matters has the right to file an appeal.

"While I believe that criticisms about the operations of the Industrial Court are healthy as we continue to develop as a nation 57 years after attaining independence, what I will not accept is that someone can stand and say publicly that “there is corruption, the Union is in cahoots with the Industrial Court and the going price is seventy-five thousand dollars”.

Those types of comments are disturbing, they are alarming and simultaneously sad. Sad because it shows a lack of understanding of the work of the Industrial Court and also because they are direct attacks on the integrity of the institution.

"Constructive criticism is always welcomed but an overarching concern is that the boundary between criticising and seeking to influence outcomes may become blurred far too often and far too quickly. This, we must all guard against. One may disagree with some rulings of the Court, but to seek to impugn its impartiality, its integrity or to diminish the importance of its role and function, is simply not the way to go.”

The trio was summoned to court after comments made by Mouttet at a breakfast meeting held by the TT Chamber in 2016.

Mouttet had criticised the court saying it was making it increasingly difficult for employers to terminate non-performing workers. He claimed the court favoured workers and unions over employers.

The case was dis­con­tin­ued due to the failure of the Joint Trade Union Move­ment (JTUM) to file ev­i­dence in the matter for two years.