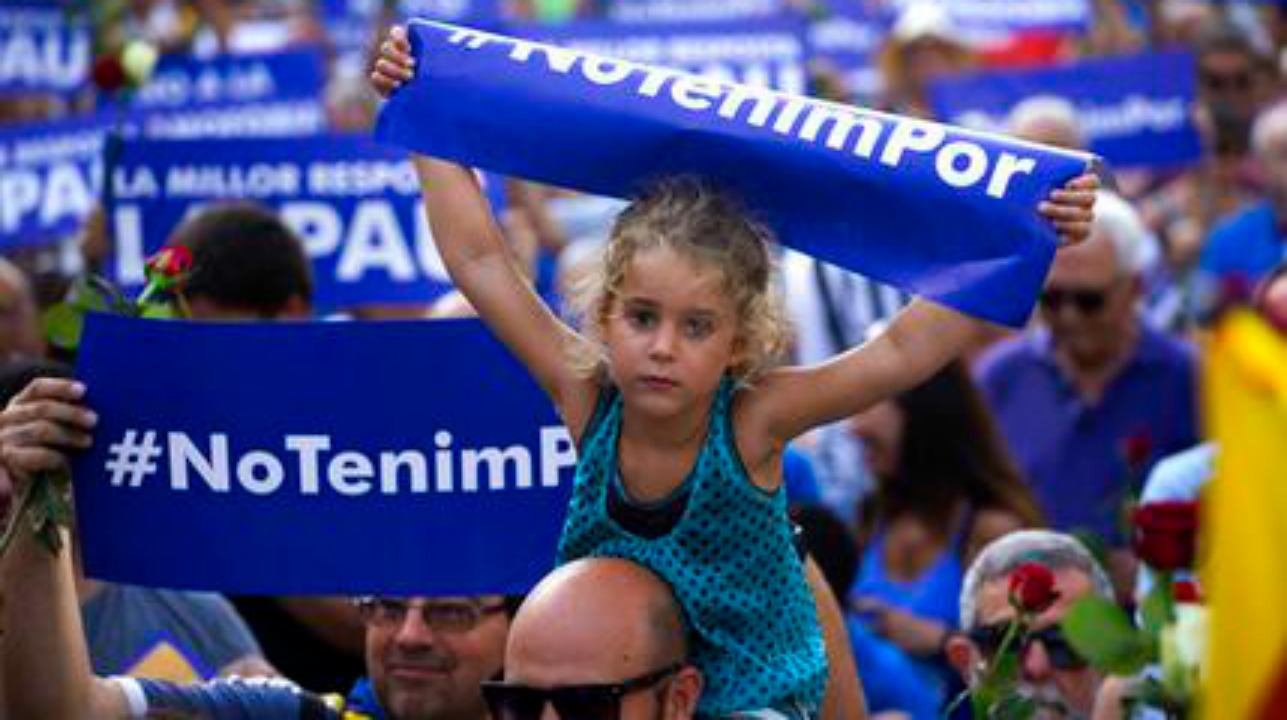 young girl holds a sign reading "We are not afraid" in the Catalan language during a demonstration condemning the attacks that killed 15 people last week in Barcelona, Spain, Saturday, Aug. 26, 2017. The Islamic State group has claimed responsibility for the attacks on Aug. 17-18 in Barcelona and Cambrils that also left more than 120 injured. Eight suspects are dead and four more under investigation, two of them in jail. (AP Photo/Emilio Morenatti)

Hundreds of thousands of peace marchers flooded the heart of Barcelona on Saturday shouting "I'm not afraid" - a public rejection of violence following extremist attacks that killed 15 people, Spain's deadliest in more than a decade.

Emergency workers, taxis drivers, police and ordinary citizens who helped immediately after the attack on Aug. 17 in the city's famed Las Ramblas boulevard led the march. They carried a street-wide banner with black capital letters reading "No Tinc Por," which means "I'm not afraid" in the local Catalan language.

The phrase has grown from a spontaneous civic answer to violence into a slogan that Spain's entire political class has unanimously embraced.

Spain's central, regional and local authorities tried to send an image of unity Saturday by walking behind emergency workers, despite earlier criticism that national and regional authorities had not shared information about the attackers well enough with each other.

In a first for a Spanish monarch, King Felipe VI joined a public demonstration, along with Prime Minister Mariano Rajoy and other Spanish and Catalan regional officials.

Still, some citizens whistled their displeasure as authorities passed by and held banners criticizing the king's role in promoting military exports to Saudi Arabia.

Barcelona police said some 500,000 people showed up to the march Saturday.

The Islamic State group has claimed the vehicle attacks in Barcelona and hours later in the coastal town of Cambrils that left 15 dead and over 120 wounded. The investigation into the Islamic extremist cell behind the attacks has shown that the group planned even more deadly carnage but accidently blew up a house in Alcanar where explosives were being built and gas tanks were being stored.

Eight suspects are dead, two are jailed under preliminary charges and two more were freed by a judge but will remain under investigation.

Medical authorities said Saturday that 22 people wounded in the attacks are still being treated in hospitals. Six of them remain in critical condition.

In the northeastern town of Ripoll, home for many of the attackers, members of the local Muslim community and other residents gathered Saturday in a central square to condemn the deadly attacks. Located at the foothills of the Pyrenees, the town is where most suspects came under the influence of a radical imam, investigators say.

Suspect says imam planned to blow himself up in Barcelona