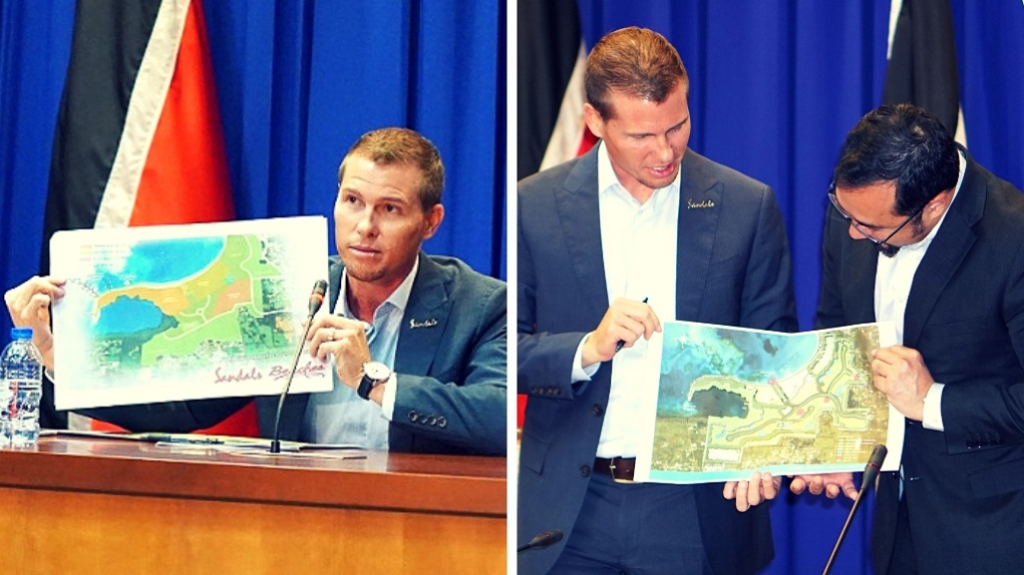 Photo: A drawing on the left which Sandals initially said they had not prepared, but which was submitted to the Environmental Management Authority (EMA), and the drawing which they said they prepared for submission (on the right). Sandals said these drawings are not final and will be subject to change based on a Certificate of Environmental Clearance (CEC) issued by the EMA.

Environment Tobago has slammed Communications and National Security Minister Stuart Young over a sketch which he and Sandals Resorts initially alleged to be fake but which was actually the illustration submitted to the Environmental Management Authority (EMA).

Both Environment Tobago and Trinidad Express journalist Mark Meredith confirmed that the drawing, which showed overwater structures along No Man’s Land and near to the protected Buccoo Reef, was in fact that submitted to the EMA, although both Sandals Group Deputy Chairman Adam Stewart and Young initially claimed that they had never seen the illustration before.

"Sandals & Minister Young say the graphic published on the front page of the Express of their resort is "false" and "fictitious". This is untrue.”

“That graphic forms part of the CEC application file to the EMA by the government’s special purpose company, Golden Grove-Buccoo Ltd. Their “Preliminary Masterplan Study” graphic, branded by them today as "completely false" is on the last page of their CEC file and forms page three of a letter dated 13th September 2018 to the EMA. It was sent to me by the EMA at my request and is in the public domain at the EMA library,” Meredith said.

Environment Tobago’s Vice President Patricia Turpin said the comments made by Young and Stewart were full of ‘distortions, claims, innuendos and downright lies’.

“The press conference held on November 27th with the Sandals representatives and the Minister of Nat. Sec-Stuart Young was full of distortions, claims, innuendos and downright lies regarding the project under application for CEC (Certificate of Environmental Clearance) by Golden Grove Buccoo Ltd-Tobago.”

“The press conference was an amusing display, reminiscent of naughty children caught with their hands in the cookie jar,” the group said.

Environment Tobago, which has been championing the protection of the Buccoo Reef and the Bon Accord Lagoon, both of which are internationally protected wetlands under the Ramsar Convention, said it was stupefied at the accusations.

“This was the second time we at Environment Tobago have heard Adam Stewart’s Sandals sales pitch. He is a practiced and well-rehearsed salesman.”

“However, when he and Minister Young both claimed that the Masterplan shown in Mark Meredith’s newspaper article was a FRAUD, we were stupefied.”

“Does either of them actually know what is in their official application. Everything we have reported and put into circulation IS from their file.”

“We would suggest that they both consult Golden Grove Buccoo.Ltd and the EMA to find out if that plan was attached to the application for a CEC and submitted to the EMA. This map was subsequently viewed through the EMA’s Mr Haydon Romano,” the group said.

The group said following media briefing, they re-checked the application and saw that the drawing remained the same.

The group said unlike Sandals and the government, they have communicated the truth.

“It is our job to hold the government accountable for a development of the proposed magnitude in an extremely sensitive area of Tobago- inside a Marine protected area and a RAMSAR site, which is part of our National Heritage.”

“It is our job to push back heavily to ensure that no development takes place without the proper processes and consultations,” the group said.

The group again insisted on the need for an Environmental Impact Assessment (EIA) in order to assess the true environmental consequences of the proposed mega-resort.

“The CEC process has only just begun (the EMA requires further information). An EIA (Environmental Impact Assessment) is a critical component and MUST be a requirement articulated by the EMA for a project where extensive changes to the landscape and social fabric of the island will take place. We will hold their feet to the fire to make sure this happens.”

“Mr Young ‘s ad hominem personal attacks have bordered on slander and reveal signs of his desperation. He should be careful what he says. As the real enemy of Tobago he doesn't intimidate us. “

During the briefing, the company also released details of a Memorandum of Understanding between Sandals and government outlining their intentions for the project.

Sandals, Young: We were not aware

Following the clarification, Sandals issued a statement saying that they have since ‘discovered’ that the template was an ‘incomplete’ version which was never meant to part of the final submission to the EMA.

“Sandals Resorts International wishes to reiterate that the document which was highlighted during the press conference was not part of the original package of drawings presented to the Executive team for submission to the Environmental Management Agency (EMA).

“Following the press conference we received a message from Mr. Mark Meredith that he was given a copy of said document from the EMA itself, and what we have since discovered is that this was an incomplete template which was never meant to be part of the final submission to the EMA, and which was never seen nor presented to the executive team nor the Government of Trinidad and Tobago.”

“We wish to point out that during our ongoing discussions we had given our commitment to Minister Young and the Government of Trinidad and Tobago, that Sandals would not design any part of the project that would encroach on No Man’s Land or the Lagoon, but rather seek to help enhance the area for public use.”

“It therefore became extremely concerning to us to see this document, which we repeat was not part of the package seen by the Executive team, then surface as the focus of discussion for this project,” Sandals said.

The company said Young was also unaware that this drawing was included in the package.

The resort said it would never violate the environmental requirements of a Certificate of Environmental Clearance (CEC) and said all drawings at this stage are not final but are only conceptual drawings.