From Tobago to Toco, social media sounds off on Duke’s swim 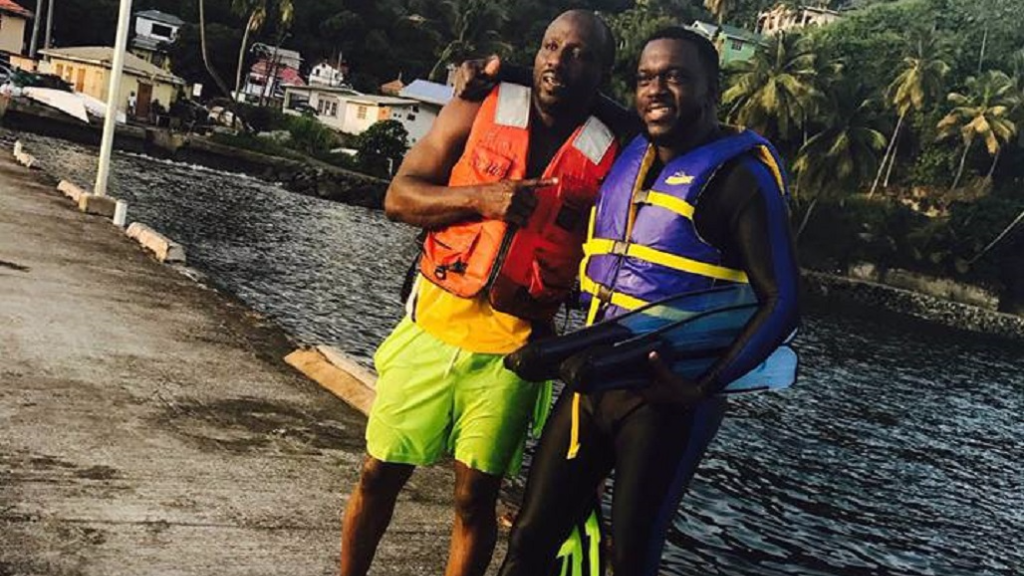 (Photo: Watson Duke prior to his swim in Tobago on Sunday).

Minority leader Watson Duke safely completed his 'swim protest' from Tobago to Trinidad on Monday, although much of the journey was done via boat.

Duke carried with him letters addressed to President Anthony Carmona, the Port Authority of Trinidad and Tobago and Civil Aviation, outlining Tobagonians' demands to be included in the decision-making process regarding a fast ferry for Tobago as well as the recent issues affecting flights between Trinidad and Tobago.

Duke swam for approximately 500 metres and then was towed for a short while after he began to tire. He travelled much of the distance via boat, then swam into Toco's fishing port to complete his symbolic demonstration.

At one point a canoe in which Duke was resting capsized, which caused consternation among his followers. However, he managed to complete the journey without any significant injuries.

Duke shared a live feed of his arrival as he swam into Toco around 2:00 pm on Monday.

Trinbagonians were varied in their responses, with some praising Duke's venture, while some criticised it.

“Take what lessons you want from today's historic move. This isn't about Watson. This is about a Tobagonian who represents a sect of the population that voted and feels justified enough to make a stance for a cause. The story that we should be telling our children isn't that Watson is doltish or he's mad. Rather, the story that this Tobagonian is taking up a cause for the people of Tobago whom he represents. For me, this matter is not one about party politics but about matters that affect even me as a Tobagonian. Even if you did not vote for Watson, all Tobagonians should feel justifiably proud. #thisisMYopinion #getoffmystatuswithALLnegativetalktoday”

“Thank you Mr Watson Duke. Tobagonians do not even understand when someone is fighting for them.”

“Under all seriousness ppl don't realise how srs this ferry issue is.....reason being that it mostly affects poor ppl who make the journey often because one return flight is the same cost as THREE return journeys with the boat so hats off to Watson Duke for standing up for the ppl and I wish him all the best.”

“Good blessed morning to you Mr. Watson Duke. I commend you on your action this morning to open the eyes of the world to the plight of our beloved country, especially Tobago and Tobagonians. I pray God's massive blessing on you and your team and you have my support. At least one of us is standing up. Safe swim!”

“All fun, games and stupidity aside. Thank you Mr. Duke for taking the initiative on attempting to make the seabridge issue known. Believe it when I say being stranded in Tobago is no fun unless you have money. Seeing the helplessness and turmoil people were in of where they'd sleep, how their children home and alone, What they'd eat and what not is really heart breaking (there wasn't even flights) . Someone update me on where he reach I going back to sleep. Be safe Watson Duke.”

“One thing I will always respect is someone who stands for what he believes in. Win or lose.”

“Keep fighting Bro. Watson...keep bringing awareness to Tobago's issues and the plight of each of us. Enough is Enough.”

“If you watched & watching the #swim and your pores aren't raised, & filled with joy that someone is standing up for you, you don't care about Tobago. #unapologetic. Farley Chavez Augustine and Watson Duke never forget all things can be done through Christ Jesus.”

“He didn't abandon the swim it just prove that if we can't have a boat to take us to an from Trinidad it is not possible to swim we as people need to understand it was not about him swimming to Trinidad but to prove how important the ferry is.”

"Don't be deflected from the real issue. A man took a stand in the shape of a swam. Did his protest bring  attention to a major problem between our two islands? Yes. Whether we say it is a gimmick or real will depend on if we continue to pressure the authorities to act. Until then he has acted while many just reacted with their mouths."

However, some disagreed with the protest.

“Shame shame shame. The mess we are in today did not start yesterday. And it still continue today. Because of a few who don't see the value of our country Tobago. The people Tobago a blind we don't travel to our part of our country and observe what take place there and that part is Trinidad.

"Look at the mess today because of tribal voting. When if we had think and put out hate a differences. Apart and voted for what we really need today goods and service will of never been a problem. Now we are saying Watson Duke making history. Well i telling you we all have to make this history a success. By holding one head.”

“People do not take Watson Duke serious because he's seen as an obnoxious, self absorbed, power starved idiot. There are people who wish he drowns today, I don't feel that way but I do think this crazy act is highly irresponsible. I'm praying that good sense prevails because while I understand the plight of my fellow Tobagonians, this attempted suicide is purely selfish. PS I'm stuck in Tobago as we speak.”

Duke criticised the decision-making process behind the Trinidad-Tobago ferry, saying that the decision should lie in the hands of the people of Tobago.

"We are going to make it clear that Tobago needs to be involved in the decision-making process. We have a Tobago House of Assembly that is responsible for the lives and livelihood of Tobagonians on the island and that must take effect."

"We are now asking that the Port Authority meet with the entire Tobago House of Assembly, the Minority Council and the Executive Council and agree on the final boat before they choose that boat. They cannot choose something for us and we are not involved," he said.