Toll rises in Australian wildfires with more danger ahead 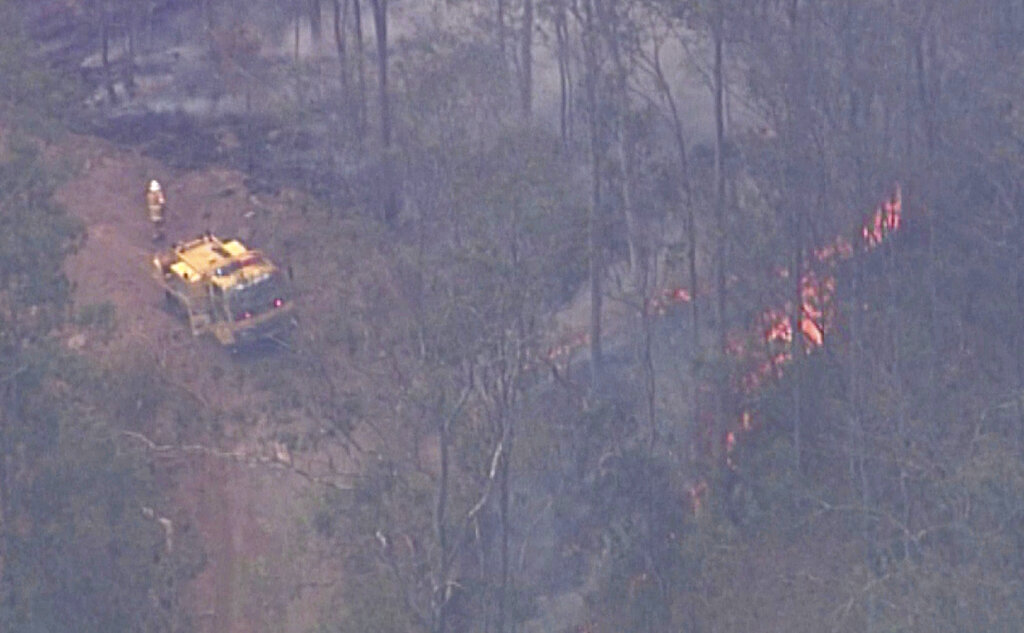 In this image made from video, forest trees are on fire in Kilkivan, Queensland state, Australia, November 13, 2019. (Australia Pool via AP)

The death toll for wildfires raging across Australia’s most populous state has risen to four as authorities warned Thursday of worsening weather conditions to come.

A body was found late Wednesday in a scorched forest near the town of Kempsey in northeast New South Wales, police said. He is suspected to be a 58-year-old man who lived in a nearby shed and had not been seen since Friday when ferocious wildfires across New South Wales killed three other people and destroyed at least 150 homes.

About 60 fires were burning around New South Wales on Thursday morning, with 27 uncontained while being battled by more than 1000 firefighters, the Rural Fire Service said.

"We had a better day yesterday, only one fire got to emergency warning, but even in these pretty benign conditions we're seeing quite a lot of aggressive fire behaviour simply because it's so dry," Rural Fire Service Deputy Commissioner Rob Rogers told the Seven Network television.

"Conditions starting to warm up tomorrow, into the weekend and then heating up early next week, a return to more gusty conditions. We're in for the long haul," he added.

US Ambassador to Australia Arthur Culvahouse Jr. said firefighting Tanker 911, a converted McDonnell Douglas DC-10 jet that can drop 35,600 litres (9400 gallons) of fire retardant, was on its way from New Mexico to the Australian east coast to help. He said in a statement he would reach out to Australian national and state leaders to offer more help if needed.

At least 50 homes were damaged or destroyed in New South Wales on Tuesday by wildfires that had burnt into the suburbs of Sydney, Australia’s largest city.

A weeklong state of emergency was declared for New South Wales because of the extraordinary fire danger. The emergency declaration gives the Rural Fire Service sweeping powers to control resources and direct other government agencies.

The annual Australian fire season, which peaks during the Southern Hemisphere summer, has started early after an unusually warm and dry winter.