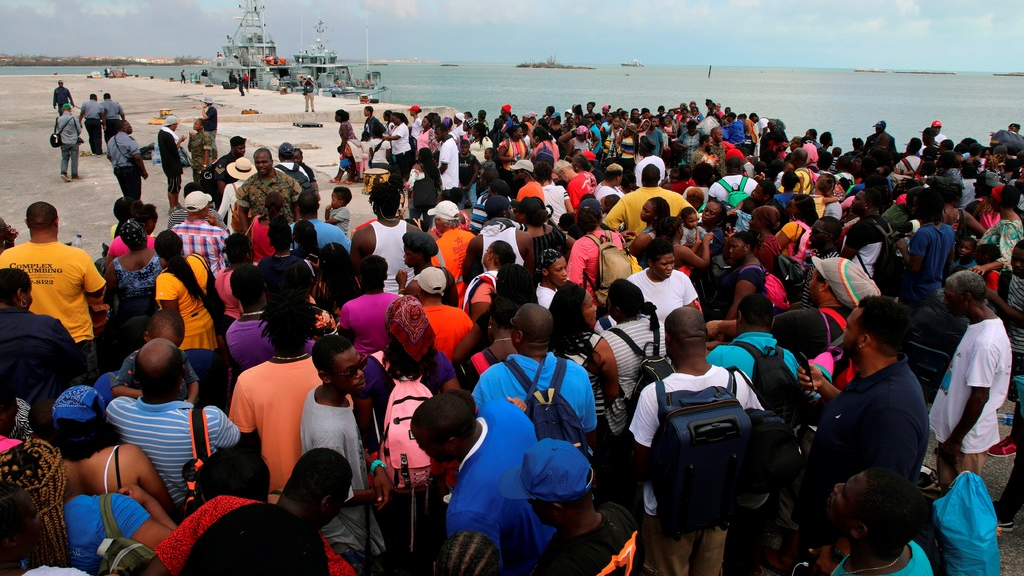 People wait in Marsh Harbour Port to be evacuated to Nassau, in Abaco, Bahamas, Friday, Sept. 6, 2019. The evacuation is slow and there is frustration for some who said they had nowhere to go after the Hurricane Dorian splintered whole neighborhoods. (AP Photo/Gonzalo Gaudenzi)

Search and rescue teams are still trying to reach some Bahamian communities isolated by floodwaters and debris after Hurricane Dorian, while the official death toll has risen to 43 and is likely to increase even more, top officials said.

Health Minister Duane Sands said late Friday in a text message to The Associated Press that 13 more deaths had been confirmed on top of the earlier number of 30. "We expect it to rise," Sands said.

Security Minister Marvin Dames said authorities are striving to reach everyone, but the crews can't just bulldoze their way through fallen trees and other rubble because there might be bodies not yet recovered.

"We have been through this before, but not at this level of devastation," Dames said. "These are very serious times and very sensitive times."

He expressed understanding for the complaints of people who are calling for help after having their lives shattered by Dorian, but he urged patience for efforts by authorities to get in humanitarian aid.

"Nothing is going to happen overnight. The knee-jerk reaction is always, 'Let's get everything all in at once,' but there's only so much you can move at any one time," he said.

The search for victims and survivors went on five days after Dorian slammed the Bahamas with 185 mph (295 kph) winds that obliterated countless homes. Officials said 30 people had been confirmed dead, but warned that the toll was sure to rise.

An array of organisations, countries and companies, including the United Nations, the US government, the British Royal Navy, American Airlines, Caribbean Airlines, many cruise lines including Royal Caribbean and Caribbean Governments, have mobilised to send in food, water, generators, roof tarps, diapers, flashlights and other supplies. US Sen. Marco Rubio of Florida said the US aid agency has asked the Defense Department to provide heavy-lift cargo planes to fly in supplies.

Dames said the runway at the airport on Grand Bahama island had been cleared and was ready for flights. Authorities also said that all ports had been reopened on that island and Abaco, both of which were devastated by the Category 5 storm.

Hundreds of desperate storm victims gathered Friday at the port on Grand Abaco in hopes of getting off the devastated island amid signs of rising frustration over the pace of the disaster-relief effort.

"It's chaos here," said Gee Rolle, a construction worker who waited with his wife for a boat that could take them to the capital, Nassau. "The government is trying their best, but at the same time, I don't think they're doing a good enough job to evacuate the people. It ain't livable for nobody. Only animals can live here."

Some of those who lined up Friday behind a yellow cloth tape had arrived as early as 1 am.

"It's going to get crazy soon," said Serge Simon, who drives an ice truck and waited with his wife and two sons, five months old and four. "There's no food, no water. There are bodies in the water. People are going to start getting sick."

There were no government-organised evacuations yet, but the Royal Bahamas Defense Force helped people board a 139-foot (42-meter) ferry that came to pick up its employees and had room for an additional 160 people. The crowd waited calmly as marines separated women and children to let them board first.

Also, a barge that had dropped off portable toilets and heavy equipment in Abaco carried away about 300 other people to Nassau.

Prime Minister Hubert Minnis spoke to the crowd at the port, using a Creole interpreter for a group of Haitians awaiting evacuation. "All of you will be treated with respect," he assured them.

Minnis said he was satisfied with the speed of the government's response and told the storm victims, "All I need you to do is just be patient and wait because everybody is coming."

On Grand Bahama, a long line formed at a cruise ship that had docked to distribute food and water. Among those waiting was Wellisy Taylor, a housewife.

"What we have to do as Bahamians, we have to band together. If your brother needs sugar, you're going to have to give him sugar. If you need cream, they'll have to give you cream," she said. "That's how I grew up. That's the Bahamas that I know."

CAL, FEEL team up to send relief supplies to the Bahamas

Carnival Cruise Line to deliver relief supplies to The Bahamas