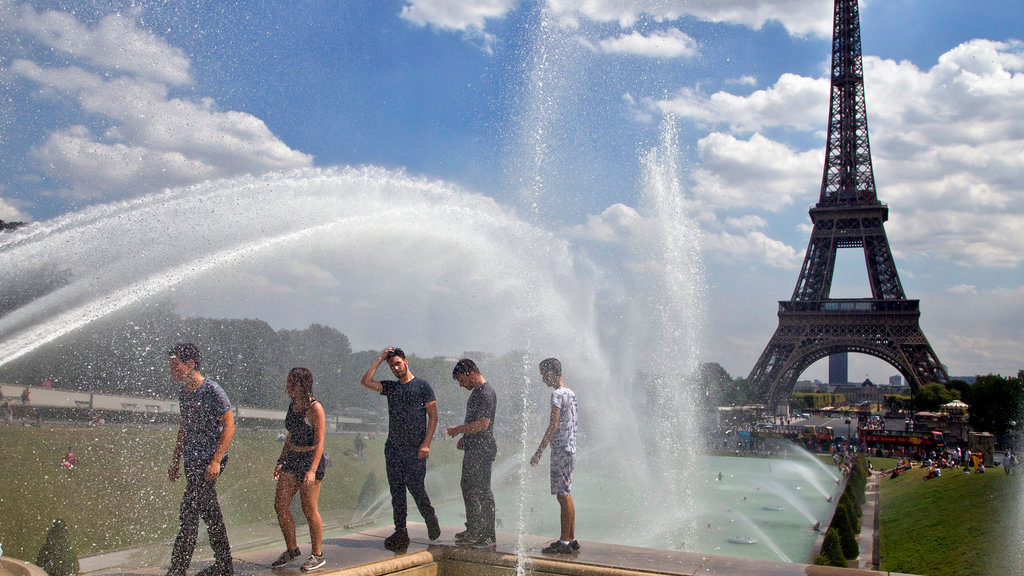 People cool off as they walk along the fountain of Warsaw near Eiffel Tower in Paris, France, Wednesday, Aug, 1, 2018. (AP Photo/Michel Euler)

The August sun sparkles on the Seine River beyond the imposing Eiffel Tower.

But the many visitors who descended on the beloved Paris monument Thursday at the peak of the summer tourist season had their hopes of climbing it thwarted.

Since Wednesday, Eiffel Tower workers have been on strike over the landmark's new visitor access policy, which they say is responsible for inordinately long queues.

Yet for many visitors whose stay is limited, long queues are better than no access at all.

"This is my first time in Paris and I was really excited to see the Eiffel Tower and ... the city from the top, but now it is closed," he said. "I'm a little bit disappointed."

Caroline Brawand, who was visiting with her family from Switzerland, had planned to share the magical view with her daughter for the first time.

"We are very let down, because we booked one month in advance to go up to the last floor of the Eiffel Tower," she said. "At the same time we understand the employees who explained to us the state of the queues."

Since last month, the Eiffel Tower has been allowing half of its tickets to be booked in advance for scheduled entry times. Previously, pre-booked tickets accounted for around one-fifth of the entries.

But unions that represent the tower's some 300 employees complain that since different ticketholders are now being allocated separate elevators, this has created "monstrous" waiting times and management has not listened to their concerns.

"There have been days with three-hour-long queues. Some elderly people fainted," said Eiffel Tower union representative Denis Vavassori.  "We are exhausted and we do not want to relive that in August."

The Eiffel Tower sees some six million visitors a year but has been beset by multiple strikes and security issues in recent years.

"This strike will continue until we will reach an agreement to reopen the Eiffel Tower and welcome our visitors under the best possible conditions," Vavassori said.

5 must-see Airbnbs in St. Kitts & Nevis you should book

Budget travel with Loop to: Dominica