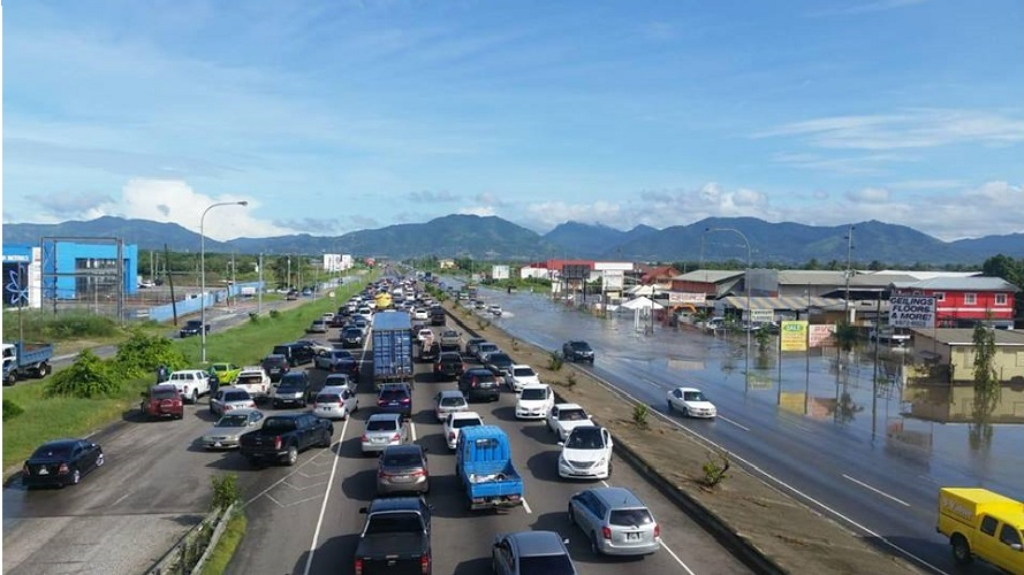 The Trinidad and Tobago Police Service has advised that as of 10:15 am on Sunday 21 October 2018, the southbound lane of the Uriah Butler Highway (UBH), south of the Grand Bazaar Interchange remains impassable to all vehicular traffic.

Police officers stationed on the highway are allowing all vehicles to proceed with caution.

The northbound lane of the UBH is being used as a dual carriageway, hence vehicles heading in a southerly direction would be directed by officers on site to turn unto the northbound lane, just after Grand Bazaar and proceed back unto the southbound lane close to the John Peter Overpass.

Motorists are being advised to proceed with extreme caution as there is heavy traffic congestion due to the dual carriageway and the flood waters have not as yet completely subsided.

They are also urged to use the highway only if necessary.

Parts of St. Helena, Kelly Village, Warner Village and Madras still remain under water and completely impassable at this time. The TTPS Operational Command Centre and the Northern Division and Central Division Operation Centres will provide timely updates to the public.

Speaking to LoopTT around 8:30 am on Sunday, Minister of Works and Transport Rohan Sinanan has confirmed that the southbound lane of the Uriah Butler Highway is still significantly flooded and he does not expect that it will be re-opened today.

An assessment was supposed to be done at 10 am to see whether cars will be allowed to pass.

At 9 am on Sunday, the Office of Disaster Preparedness and Management stated that the Southern Main Road between Washington Bridge and Warrenville, Cunupia is impassable.

Commenting on the forecast inclement weather today, Minister Sinanan said they will be monitoring the impact the rainfall and tides may have on existing water levels on the highway.

The Public Transport Service Corporation (PTSC) will be providing free shuttle service to and from San Fernando and Port of Spain today.

Motorists are being cautioned to avoid using the Uriah Butler Highway unless absolutely necessary.