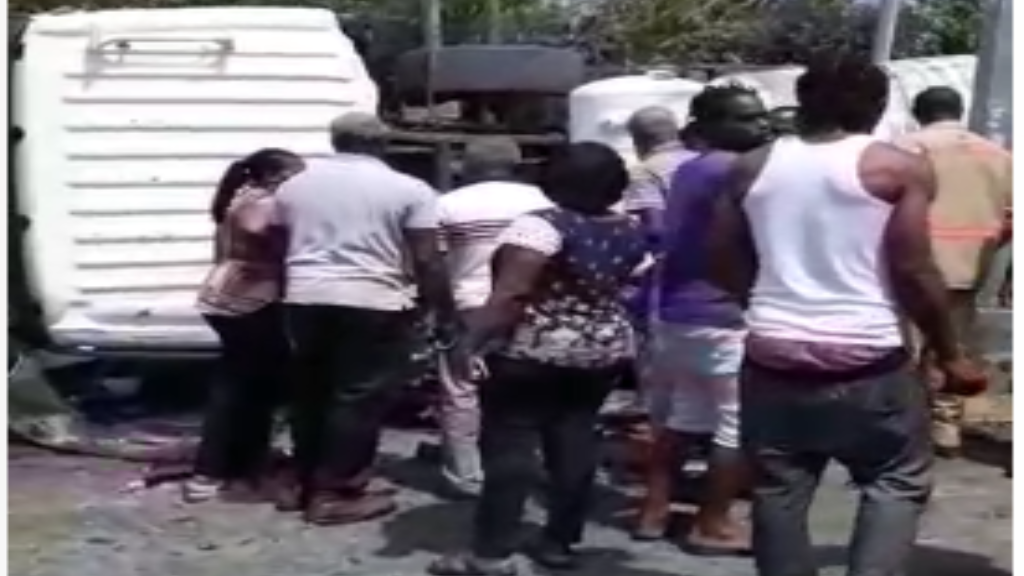 Image: Screengrab taken from video of the aftermath of an accident in Tobago on Monday.

A Trincity woman is dead following a collision with a cement truck along Windward Road in Tobago on Monday.

Claudia Hunte, 68, was the front seat passenger in a Nissan Wingroad when the cement truck landed on top of the vehicle.

The car was driven by Filton Murray from Pembroke, while Beatrice Dann-Nancis, 63, from Goodwood was seated in the back seat.

This was the second road fatality recorded for the year.

According to reports, the cement truck was heading east along Windward Main Road, when on reaching the Hope area, the driver lost control of the truck and crashed into another truck and a car, then landed on top of the Nissan Wingroad, which was travelling in the other direction. The car was flattened in the impact.

Video recorded by a bystander captured the chaos as concerned persons rushed in to assist in the rescue of the injured persons trapped beneath the truck.

The revolving drum which mixes aggregate was still rotating as persons tried to reach the injured three.

She was pulled from the wreckage before Murray and Dann-Nancis and rushed to hospital where she succumbed to her injuries.

Murray sustained a fractured leg while Dann-Nancis complained of pains in her neck and shoulders.

The driver of the cement truck, identified as Neilon Alfred, 24, received serious injuries and remains warded at the Scarborough General Hospital at this time.

Fire officials called in two trucks and an excavator to assist in the rescue operations which entailed the cement truck being raised and lifted off of the Wingroad.

The accident caused a backup of traffic for more than five hours as fire officials cleaned spilled fuel from the roadway.