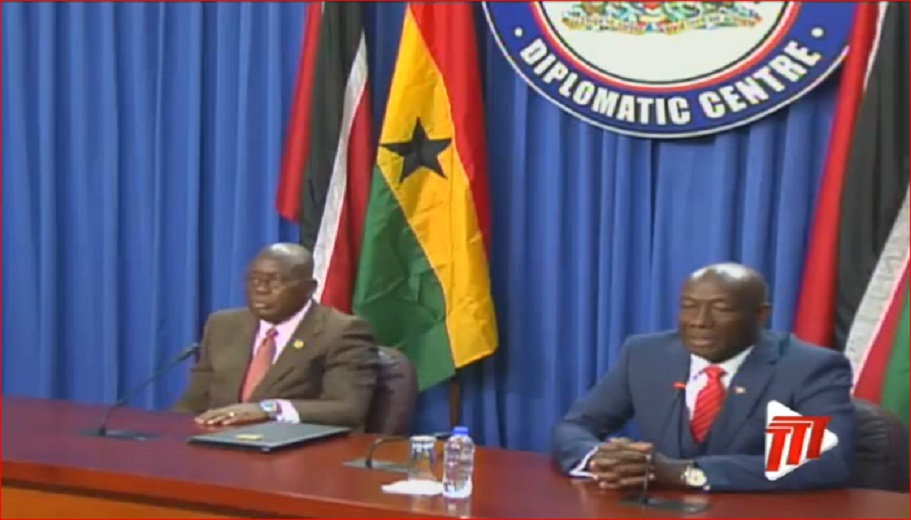 Trinidad and Tobago and Ghana are advocating for peace in Venezuela.

This was made clear by Prime Minister Dr Keith Rowley and Ghana's President Nana Akufo-Addo as the West African leader continues his tour of the Caribbean.

"Ghana is a country that has a lot in common with Trinidad and Tobago with respect to our diplomatic positions so we discussed it in that context and as the international efforts are being made to bring about dialogue within the Venezuelan context between Venezuelans, other countries of the world are trying to encourage them and Ghana's role as the leading West African and African country and on behalf of not just Ghana but the Caribbean and Venezuela, Ghana would do well to assist in ensuring that there are diplomatic initiatives maintained towards a peaceful solution and a speedy solution to the Venezuelan problem," Dr Rowley said.

President Akufo-Addo also addressed the global concern of Venezuelan migrants. He said there is unity among all affected parties under the formation of Africa, Caribbean and Pacific Group of States (ACP). He said as such, Africa is prepared to help.

"On the African side, whatever we can do also to assist those on this side to be able to have a positive resolution of the crisis in Venezuela, we feel is our moral duty to do so," President Akufo-Addo said.

Direct travel to Ghana possibly on the horizon

Ghana's President said there ought to be improved interconnectivity between countries in the Caribbean and Africa. This, as he noted that Caribbean territories are made of Africans that were forced to leave their homes. He aid this interconnectivity was discussed during talks with the T&T Government.

"It's part of the range of things that we spoke about today and I'm sure that within the framework that we are trying to establish, it's one of the first things that we will address: how to have direct air services links with Trinidad and Tobago and with the other islands in the Caribbean."

According to Dr Rowley, Trinidad and Tobago discussed mutual agreements with Ghana toward areas of energy, agriculture, education, culture, diplomacy, as well as current issues such as the threat to the ACP.

He said the ACP serves as a block for world trade uniting the Caribbean, Africa and the Pacific. However, the Prime Minister noted that efforts are afoot by individuals and organisations, to separate the entity. He said this would stifle the Caribbean's voice on the world stage.

"It would be extremely detrimental to the Caribbean to find itself in the world environment negotiating as a small block. We are better protected and we are stronger as part of the ACP. So, our diplomatic initiatives in the post [inaudible] era, is to ensure that we lobby all concern towards a renewal of these agreements within the context of the African, Caribbean, Pacific arrangement and not in a divided way and in that context the Caribbean relies on Ghana and our colleagues elsewhere to agree with us on this position and let that be our diplomatic response so that as the new agreements are grafted and come into force that the ACP body is protected and preserved."

Dr Rowley visited Ghana in 2016 as both countries share a longstanding relationship.