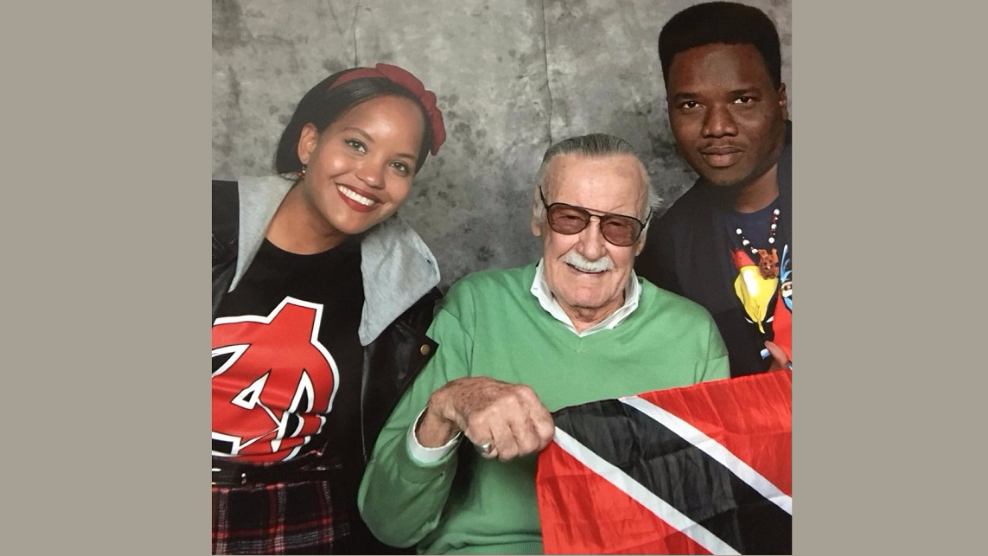 It's safe to say even comic book legend Stan Lee is a fan of Trinidad and Tobago.

Trinbagonian Phillip Simon posted his amazing photo on social media over the weekend, which has since gone viral, showing him and Britney Alonzo-Simon posing with Marvel icon Stan Lee for a photo at Tokyo Comic Con over the weekend.

Simon recounted how he managed to pull off this amazing photo on his post on Saturday:

"So today in Tokyo comic we went to see the living legend once more but this time with the flag of our country in hand. I knew I wouldn’t have much time to ask him to hold it so I rehearsed a few times in the line."

"When we got in I mustered up some courage pulled out the Trinidad and Tobago flag and asked Stan Lee if he could please hold one end. Stan Lee’s face lit up. He was more than happy to do it but then the security started screaming “no no no!!” repeatedly."

"Luckily neither Stan Lee or his agents saw any danger in it and we got this picture. What a great guy indeed. Long live Stan Lee!"

Stan Lee is one of the most famous figures in comic book history, having co-created many of Marvel's most well-known comic book characters, including Spider-Man, the Hulk, Doctor Strange, the Fantastic Four, Iron Man, Daredevil, Thor, Black Panther, the X-Men, and many others, introducing a thoroughly shared universe into superhero comic books.

In addition, he challenged the comics industry's censorship organization, the Comics Code Authority, indirectly leading to it updating its policies.

Lee was formerly editor-in-chief of Marvel Comics and later its publisher and chairman before leaving the company to become its chairman emeritus, as well as a member of the editorial board.

He subsequently led the expansion of Marvel Comics from a small division of a publishing house to a large multimedia corporation.

Lee received a National Medal of Arts in 2008. He has had many cameo appearances in films and TV, he holds the number one spot in terms of total revenue generated by all the films an actor has appeared in over their lifetime.