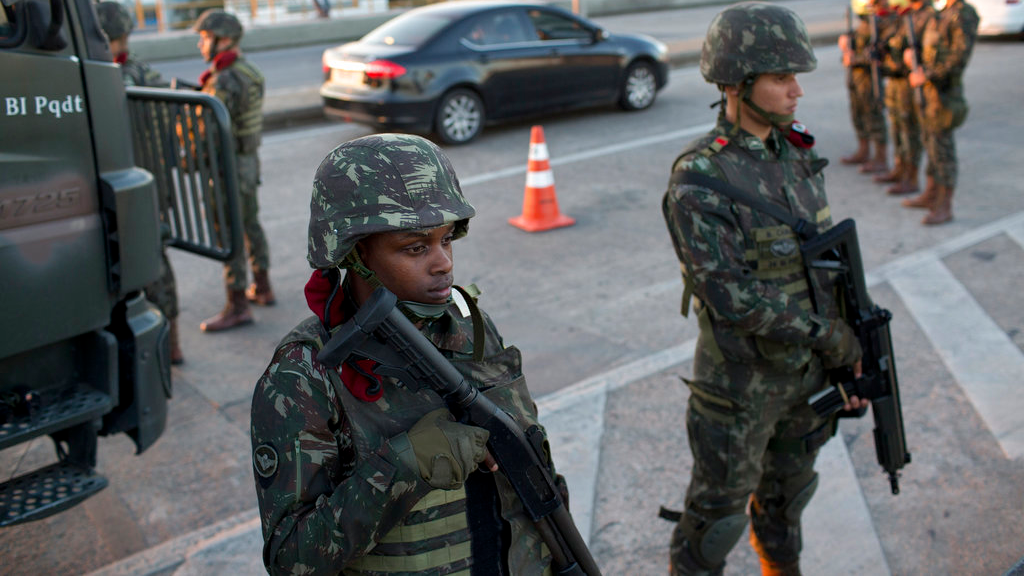 Thousands of soldiers began patrolling Rio de Janeiro on Friday amid a spike in violence in Brazil's second-largest city.

The deployment of 8,500 soldiers, plus hundreds of police and highway patrol officers, is aimed at fighting organized crime gangs, which control many of the city's hundreds of slums.

Defense Minister Raul Jungmann said patrols would soon start participating in operations against drug traffickers. That is a break from previous duties that were limited to patrolling, manning checkpoints and recovering caches of weapons seized during police raids. The operation is scheduled to run until the end of 2018.

Some troops began deploying in the afternoon, with trucks full of soldiers seen rolling over bridges and expressways.

While the main efforts were concentrated in the city's north, where violence is most pervasive, armored vehicles were also patrolling the quiet surroundings of the Santos Dumont airport.  As the sun set, a dozen soldiers with rifles in hand stood silhouetted against Guanabara Bay.

"I'm not really sure what they are doing here, since the crime they have to fight is in the other side of the city," said Almir Soares, a passer-by. He called the deployment a stunt, but then conceded that the military operation could deter violence where it is actually needed.

Three people on average were killed each day by stray bullets in the first six months of the year in Rio de Janeiro. That mounting number, plus criminal assaults and increasing shootouts between drug traffickers and police, have led authorities in recent weeks to acknowledge that much of the city is out of their control.

Last year, 85,000 troops were used to bolster security around the venues of the 2016 Summer Olympics held in Rio.