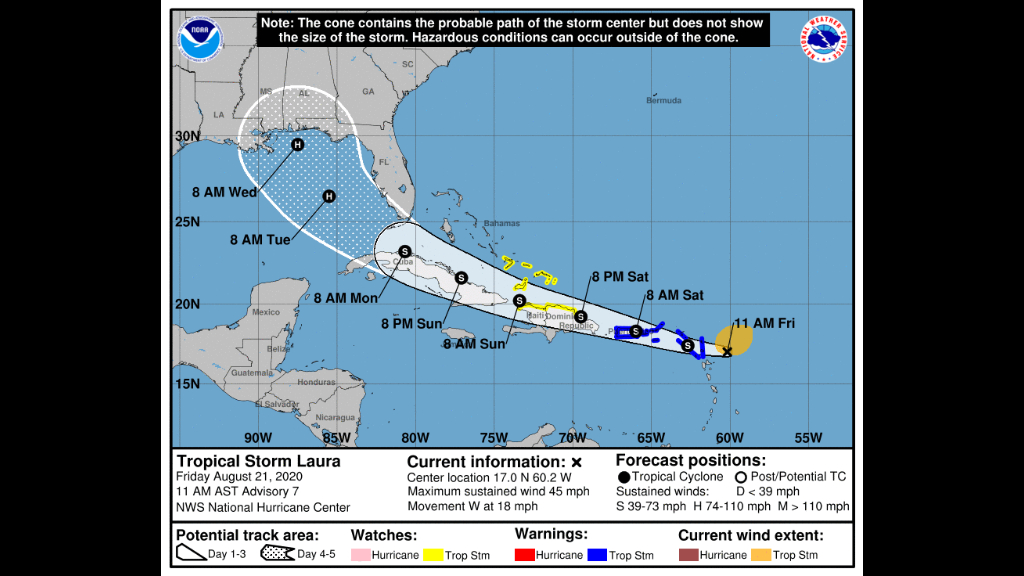 The Northern Leeward Islands and Puerto Rico are expected to experience the effects of Tropical Storm Laura later today, according to the US National Hurricane Centre (NHC) forecast.

A Tropical Storm Watch is in effect for the northern coasts of the Dominican Republic and Haiti, the south-eastern Bahamas and Turks & Caicos Islands.

At 11 am AST, the NHC said the centre of Tropical Storm Laura was located over the Atlantic Ocean about 210 miles (335 km) east-southeast of the northern Leeward Islands. It's moving toward the west near 18 mph (30 km/h) and a generally west-north-westward motion at a faster forward speed is expected over the next couple of days.

The centre of Laura is expected to move over the northern Leeward Islands later today.

The system is expected to make landfall in Puerto Rico or the northern coast of Hispaniola this weekend.

Tropical-storm-force winds extend outward up to 150 miles (240 km) from the centre.

Some slow strengthening is forecast to occur during the next 48 hours.

Laura is expected to produce three to six inches of rain over Puerto Rico and the Virgin Islands, the Dominican Republic, and the southern Haitian Peninsula through Sunday.

There is the potential for flash flooding and landslides.