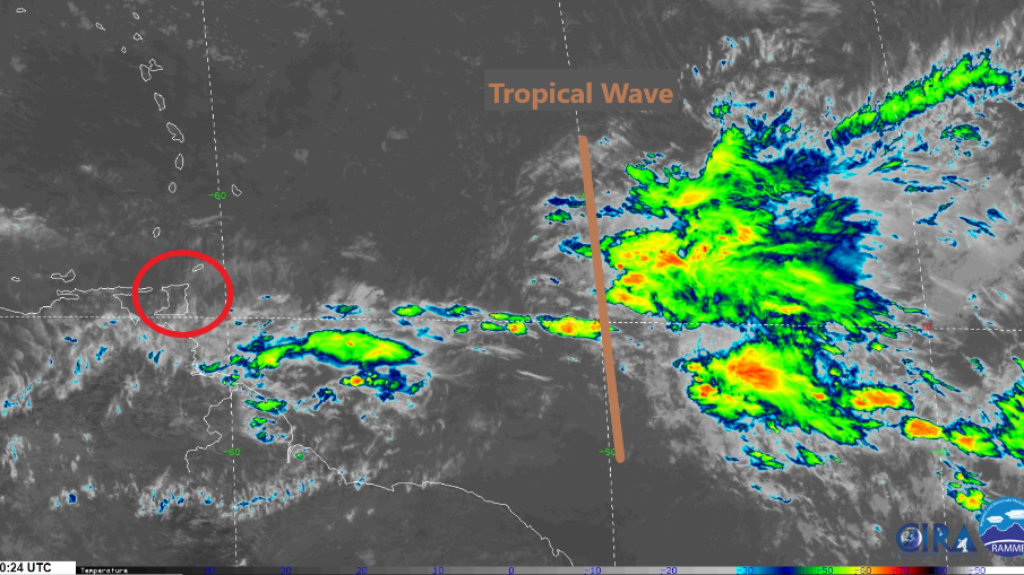 The Trinidad and Tobago Meteorological Service said it is monitoring an approaching Tropical Wave which should reach the islands by Saturday.

The Met Office issued a social media update on Thursday but said it’s not necessary to issue an official weather alert just yet.

“There is a Tropical Wave to the east of T&T and the axis of this wave is expected to pass early on Saturday. This is expected to slightly increase the likelihood of showers and thunderstorms tomorrow and Saturday.”

“Based on our analysis, an Alert is not warranted at this time, however we will continue to monitor the progress of this Wave.”

The Met Office said the public should monitor updates via its social media channels as the system develops.

What is a Tropical Wave?

A tropical wave (also called easterly wave, tropical easterly wave, and African easterly wave), in and around the Atlantic Ocean, is a type of atmospheric trough, an elongated area of relatively low air pressure, oriented north to south, which moves from east to west across the tropics, causing areas of cloudiness and thunderstorms.

Tropical waves form in the easterly flow along the equatorward side of the subtropical ridge or belt of high air pressure which lies north and south of the Intertropical Convergence Zone (ITCZ).

Tropical waves are generally carried westward by the prevailing easterly winds along the tropics and subtropics near the equator.

They can lead to the formation of tropical cyclones in the north Atlantic and northeastern Pacific basins.

A tropical wave normally follows an area of sinking, intensely dry air, blowing from the northeast. After the passage of the trough line, the wind veers southeast, the humidity abruptly rises, and the atmosphere destabilizes.

An exception to this rain is in the Atlantic. Sometimes, a surge of dry air called the Saharan Air Layer (SAL) follows a tropical wave, leaving cloudless skies, as convection is capped by the dry layer inversion. Also, any dust in the SAL reflects sunlight, cooling the air below it.