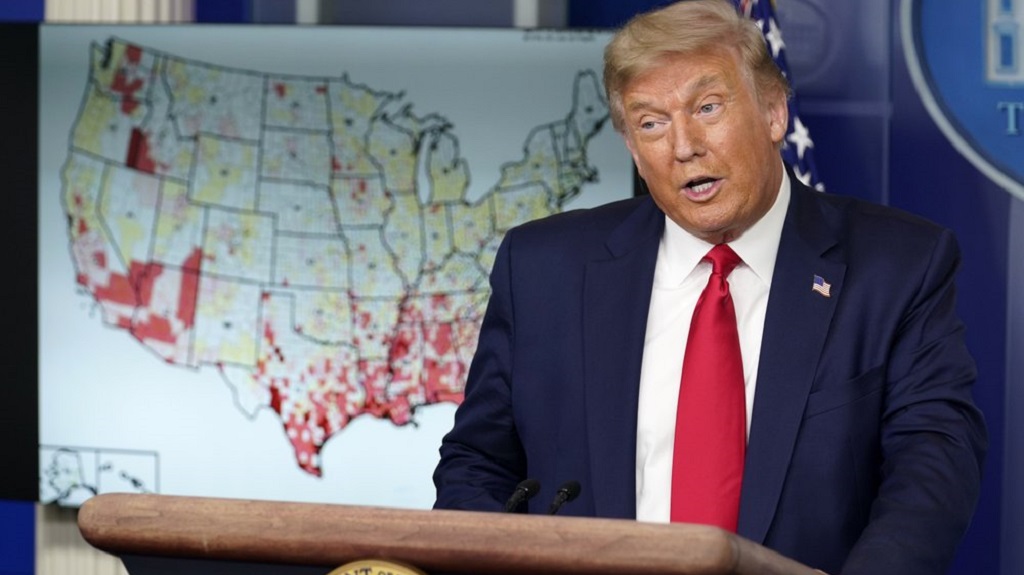 Bowing to the coronavirus threat, President Donald Trump has scrapped plans for a four-night Republican National Convention celebration in Florida that had been set to draw more than 10,000 people to a pandemic hot spot to mark his renomination.

Trump had already moved the convention's public events out of North Carolina because of virus concerns. But the spiking virus shifted to the South, too, and the planned gathering in Jacksonville increasingly appeared to be both a health and political risk. Trump and his advisers feared that going forward with big parties and "infomercial" programming in Florida would ultimately backfire on the president.

"It's a different world, and it will be for a little while," Trump said, explaining his decision at a Thursday White House coronavirus briefing. "To have a big convention is not the right time."

A small subset of GOP delegates will still formally re-nominate Trump on August 24 in Charlotte, North Carolina, at an event scheduled to last just four hours.

Trump had decided last month to shift the ceremonial portions of the GOP convention to Florida because of a dispute with North Carolina's Democratic leaders over holding an indoor gathering with throngs of supporters taking a pass on face masks.

But his plans for a grand gathering in Florida started shrinking almost as quickly as the move was announced, as virus cases spiked in the state and other parts of the country.

Trump said he plans to deliver his nomination acceptance speech in an alternate form still to be determined — perhaps online. Trump campaign manager Bill Stepien said the campaign will still "provide exciting, informative, and enthusiastic programming so Republicans can celebrate the re-nomination of President Trump and Vice President Pence."

Trump said thousands of his supporters and delegates wanted to attend the events in Florida but "I just felt it was wrong" to gather them in a virus hot spot. Some of them would have faced quarantine requirements when they returned to their home states from the convention.

"We didn't want to take any chances," he added. "We have to be vigilant. We have to be careful, and we have to set an example."

Democrats will hold an almost entirely virtual convention August 17-20 in Milwaukee using live broadcasts and online streaming, according to party officials. Joe Biden plans to accept the presidential nomination in person, but it remains to be seen whether there will be a significant in-person audience.

The Biden campaign did not immediately respond to messages Thursday seeking comment on Trump's announcement.

In recent weeks, Trump aides and allies have encouraged the president to consider calling off the convention, arguing it was not worth going forward with the event if the focus would be on the pandemic.

Trump acknowledged that consideration, saying, "I could see the media saying, 'Oh, this is very unsafe.'"

After a three-month hiatus, Trump has stepped back to the forefront of the government's handling of the virus with regular briefings aiming to stanch an erosion of support in public and private polls that has followed the surge in new virus cases.

Trump said he did not cancel the convention events at the request of local officials, but the Jacksonville City Council was set to meet Friday to discuss safety concerns around the gathering.

"I know this was a difficult decision and just demonstrates and reaffirms once again his commitment to Jacksonville, the state of Florida and the people of the United States of America," he said. "I'm grateful for him and his leadership, and this was the right way to move forward."

Joe Gruters, current chair of the Florida Republican Party and a state senator from Sarasota, called it a "selfless move."

"Having our home-state candidate was going to be a really big deal for Florida, but listen, he had it right," Gruters said. "At the end of the day, it's about safety."

More than 10,000 people were expected in Jacksonville — already a fraction of the number that would typically attend a nominating convention. Only 336 delegates will be allowed to participate in Charlotte under extraordinary procedures approved last month by the Republican National Committee. The balance of the more than 2,500 delegates will vote by proxy.

Cory Burkarth, a spokesperson for the city of Charlotte, said Thursday, "We have an agreement in place with the Republican National Committee to host a substantially scaled down business meeting and that is what we are planning to do."

The RNC had raised more than $35 million in contributions earmarked for the convention since 2017, according to an analysis of campaign finance disclosures by The Associated Press.

The list of donors to the now-cancelled event reads like a who's who of industry titans, power brokers and wealthy Republicans.

The RNC's convention committee had spent $9.5 million through June. But that doesn't take into account the spending of the local host committee, which pledged to raise $70 million.

The Charlotte City Council voted in April to accept a $50 million federal grant for convention security. City Attorney Patrick Baker said the city had spent $14 million prepping for the convention but expected Charlotte to get reimbursed through the grant.

Trump not ready to commit to election results if he loses