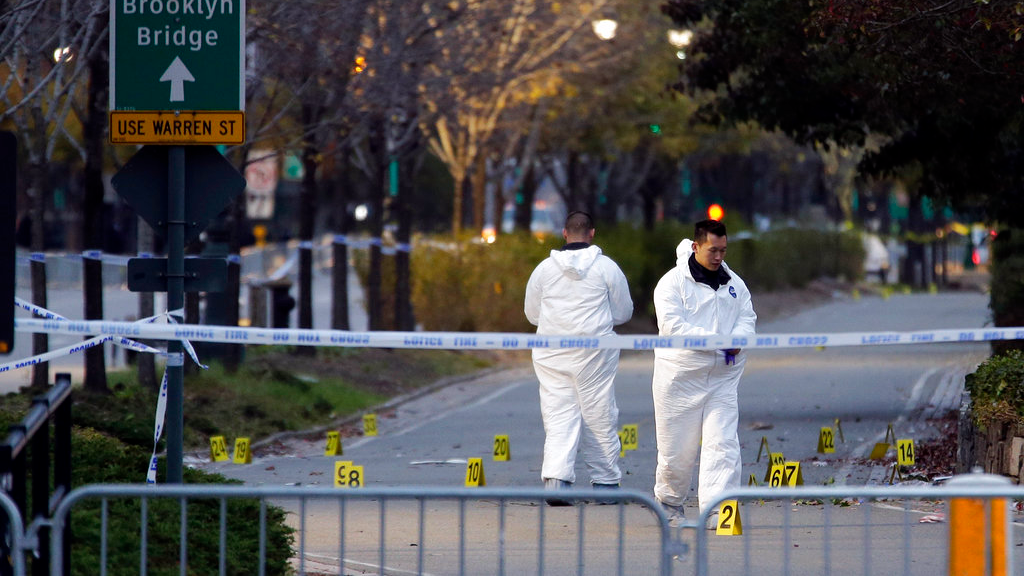 The Latest on the truck attack on a bike path near the World Trade Center (all times local):

Trump says on Twitter on Wednesday that the driver in Tuesday's attack "came into our country through what is called the 'Diversity Visa Lottery Program,' a Chuck Schumer beauty."

Officials said the attacker is an immigrant from Uzbekistan who came to the U.S. legally in 2010. They haven't said whether he came in through the Diversity Immigrant Visa Program, which covers immigrants from countries with low rates of immigration to the U.S.

Trump tweeted, "We are fighting hard for Merit Based immigration, no more Democrat Lottery Systems. We must get MUCH tougher (and smarter)."

Cuomo stressed Wednesday on "CBS This Morning" that the investigation is ongoing.

Law enforcers are working to determine what led the pickup truck driver to plow down people on the bike path on Tuesday afternoon. The driver is in critical condition after police shot him in the abdomen.

Cuomo calls the driver a "depraved coward," and says the attack "did not instill terror" among hardy New Yorkers.

France's prime minister says the deadly truck attack on a New York bike path is a reminder that the threat is high everywhere, and that authorities must remain "as humble as we are determined" to fight extremism.

After checking security measures at the Eiffel Tower on Wednesday, Prime Minister Edouard Philippe said the Manhattan attack shows that "the means used by those who want to hurt us can be of formidable effectiveness, and formidable simplicity."

Philippe said ordinary people should remain vigilant and not forget "that the threat level is high, and it is high everywhere in the world." He said authorities should give "credible responses" and focus on intelligence as well as security barriers like those installed around France after multiple deadly attacks.

Eight people were killed in Tuesday's truck attack by an Uzbek immigrant near the World Trade Center.

FBI agents and police are searching for evidence in the Paterson, New Jersey, neighborhood where the man suspected of plowing down people on a New York City riverfront bike path lived.

The building's manager told The Record that Sayfullo Saipov lived with his wife and two children in a two-bedroom apartment.

The man, who identified himself only as Ali, says he rented the apartment to the 29-year-old several months ago.

A man who identified himself as Saipov's neighbor told NJ Advance Media he often saw Saipov standing on the corner talking to friends.

The city is home to a large Muslim population and a mosque is near the apartment.

An eerie emptiness hovers over a major New York City traffic artery, one day after a deadly truck attack along a popular bike path near the World Trade Center.

Morning rush-hour traffic has been banned Wednesday along a stretch of the highway in Lower Manhattan. Police helicopters circled overhead.

Some runners and bicycle riders did their best to maintain their normal routines. But police blocked off the bike path north of where the rampage began.

Truck drivers steered clear of the frozen zone to make their morning deliveries.

Investigators worked to determine what led the pickup truck driver to plow down people on the riverfront bike path, killing eight on Tuesday.  The driver is in critical condition after police shot him in the abdomen.

Iran's Foreign Ministry has condemned the truck attack in New York City that killed eight people and seriously injured at least 11, referring to it as a "terrorist" assault.

That's according to a report Wednesday by the semi-official Fars news agency. It quoted Foreign Ministry spokesman Bahram Ghasemi.

Ghasemi said in a statement that "a serious approach coinciding with honesty and transparency of all nations" is the only way to "uproot" terrorism.

Ghasemi also expressed sympathy with the relatives of the "innocent" victims of the attack.

Tensions are high between Iran and the U.S. as President Donald Trump recently refused to re-certify the nuclear deal Tehran struck with world powers.

The German government says a German citizen is among the injured in the truck attack on a bike path in New York City.

The Foreign Ministry didn't identify the female German citizen or give any details about the severity of her injuries in a note on its website Wednesday.

Eight people were killed and at least 11 seriously injured in Tuesday's attack.

Chancellor Angela Merkel's spokesman, Steffen Seibert, wrote on Twitter: "Horrified at the evil terrorist #ManhattanAttack. Our hearts go out to the victims + families. From Berlin to NYC: We stand with you."

The kingdom on Wednesday offered its condolences to the families of the victims and reiterated its "rejection and condemnation of such terrorist acts."

The United Arab Emirates and Bahrain, meanwhile, issued statements supporting efforts and measures taken by the U.S. to combat terrorism and enhance security.

Earlier, Qatar said it, too, offers its "full solidarity with the U.S. government and its support for all measures taken to maintain security."

The president of Uzbekistan has sent his condolences to U.S. President Donald Trump and offered his country's assistance in investigating Tuesday's attack in New York by an Uzbek national.

Eight people were killed when a truck plowed down a riverfront bike path near the World Trade Center.

Officials who weren't authorized to discuss the investigation and spoke to The Associated Press on the condition of anonymity identified 29-year-old Sayfullo Saipov as the attacker. They say he came to the U.S. legally from Uzbekistan in 2010.

President Shavkat Mirziyoyev also offered condolences to families of the victims in a statement Wednesday.

Uzbekistan borders Afghanistan and is one of the most closed off post-Soviet republics. Previously, Uzbek officially never commented or acknowledged any security incidents abroad involving Uzbek nationals.

The Argentine foreign ministry has identified its citizens killed in the bike path attack near the World Trade Center.

The ministry also says one of its citizens, Martin Ludovico Marro, is recovering from injuries at Manhattan's Presbyterian Hospital.

The victims were part of a group of friends celebrating the 30th anniversary of their graduation from the Polytechnic School of Rosario, Argentina.

The government gave its condolences and said that all Argentines are sharing in this terrible moment of profound sadness.

Investigators are working to determine what led a pickup truck driver to plow down people on a riverfront bike path near the World Trade Center, killing eight.

The driver is in critical condition after police shot him in the abdomen.

Authorities said after crashing the truck, he brandished air guns and yelled what witnesses said was "Allahu Akbar," which is Arabic for "God is great."

Officials who weren't authorized to discuss the investigation and spoke to The Associated Press on the condition of anonymity identified the attacker as 29-year-old Sayfullo Saipov. They say he came to the U.S. legally from Uzbekistan in 2010.

One of the dead is from Belgium and five others were from Argentina.

The Latest: Trump answers terror attack: 'NOT IN THE U.S.A.'