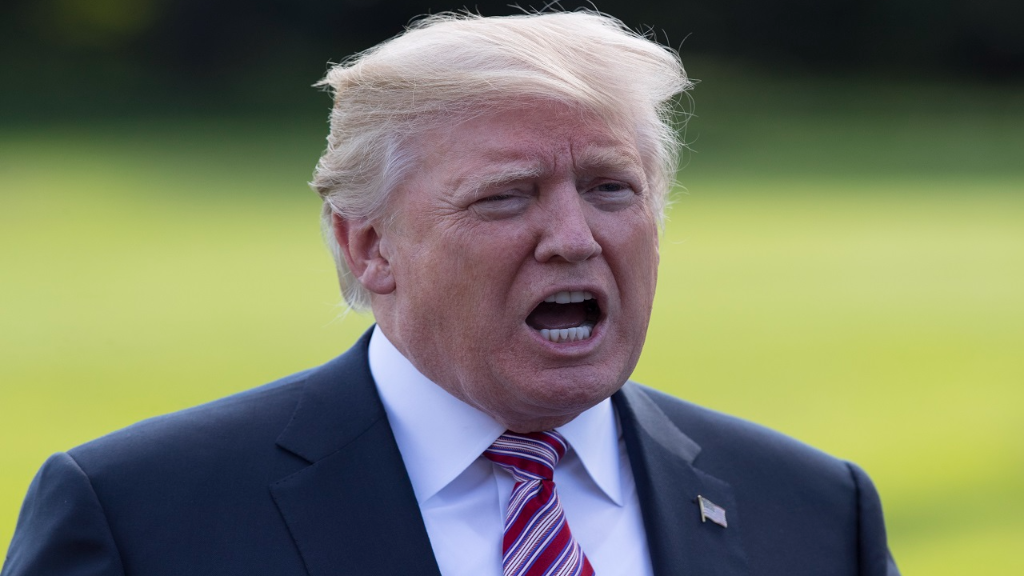 In this Sept. 29, 2017 file photo, President Donald Trump talks to media as he walks across the South Lawn of the White House in Washington.

President Donald Trump on Saturday lashed out at the mayor of San Juan and other officials in storm-ravaged Puerto Rico, contemptuous of their claims of a laggard U.S. response to the natural disaster that has imperiled the island's future.

"Such poor leadership ability by the Mayor of San Juan, and others in Puerto Rico, who are not able to get their workers to help," Trump said in a series of tweets a day after the capital city's mayor appealed for help "to save us from dying."

"They want everything to be done for them when it should be a community effort," Trump wrote from his New Jersey golf club.

The tweets amounted to a biting response to San Juan Mayor Carmen Yulin Cruz, who had accused the Trump administration of "killing us with the inefficiency" after Hurricane Maria. She implored the president, who is set to visit the U.S. territory on Tuesday, to "make sure somebody is in charge that is up to the task of saving lives."

"We are dying, and you are killing us with the inefficiency," Cruz said at a news conference, her voice breaking with rage. "I am begging, begging anyone that can hear us, to save us from dying."

Trump has pledged to spare no effort to help Puerto Rico recover from Maria's ruinous aftermath, and tweeted that military personnel and first responders have done "an amazing job," despite having "no electric, roads, phones etc."

Puerto Rico, he said, "was totally destroyed," and "10,000 Federal workers now on the island are doing a fantastic job."

"The Mayor of San Juan, who was very complimentary only a few days ago, has now been told by the Democrats that you must be nasty to Trump," the president charged, without substantiation.

Critics have accused Trump of showing more concern for the people of Texas and Florida, whose lives were also upended by major hurricanes this season. Trump repeatedly praised those citizens as strong and resilient, declaring at one point that Texas could "handle anything."

Thousands more Puerto Ricans have received water and rationed food as an aid bottleneck has begun to ease. Telecommunications are back for about 30 percent of the island, nearly half of the supermarkets have reopened at least for reduced hours and about 60 percent of the gas stations are pumping. But many remain desperate for necessities, most urgently water, long after the Sept. 20 hurricane.

Trump is scheduled to spend an hour Saturday checking in by phone with FEMA Administrator Brock Long, Puerto Rico's governor, Ricardo Rosselló, and other local officials. He'll also speak with the governor of the U.S. Virgin Islands, which have received less attention, but were also ravaged by the storms.

Trump's Saturday tweets are the latest example of his insistence on "punching back," even against those with far less power. After a deadly terror attack in London in June, Trump singled out London Mayor Sadiq Khan, suggesting he wasn't taking the attacks seriously enough in a tweet that misconstrued Khan's words.

During his campaign, Trump also picked fights with a Gold Star family and a former beauty queen who publicly supported his Democratic rival.

Cruz declined to engage in the tit-for-tat, instead calling for a united focus on the people who need help. "The goal is one: saving lives. This is the time to show our 'true colors.' We cannot be distracted by anything else," she tweeted, along with photos of herself meeting with residents and rescue workers, wading hip-deep through a flooded street and comforting an elderly woman.

Trump said Friday that Puerto Rico is "totally unable" to handle the catastrophe on its own. "They are working so hard, but there's nothing left," he said. "It's been wiped out." He said the government is "fully engaged in the disaster and the response and recovery effort."

Yet even in voicing solidarity and sympathy with Puerto Rico, he drew attention again to the island's debt burden and infrastructure woes, leaving doubt about how far Washington will go to make the U.S. territory whole.

"Ultimately the government of Puerto Rico will have to work with us to determine how this massive rebuilding effort — it will end up being one of the biggest ever — will be funded and organized, and what we will do with the tremendous amount of existing debt already on the island," he said. "We will not rest, however, until the people of Puerto Rico are safe."

During this season's trio of monster hurricanes — Harvey, Irma, Maria — Trump and his administration have drifted into the perilous territory of premature self-congratulation in the face of unfolding catastrophe, seemingly unmindful of the "Brownie moment" that scarred George W. Bush's presidency.

Bush famously told his emergency management director, Michael Brown, "Brownie, you're doing a heck of a job" during what proved to be a tragically inept federal response to deadly Hurricane Katrina in 2005.

Trump has repeatedly boasted about the positive reviews he said his administration was getting from Puerto Rico and the U.S. Virgin Islands for its relief effort, even as people in remote towns struggle to find food, water and other basics. Then Trump's acting homeland security secretary, Elaine Duke, called the federal relief effort a "good-news story" because of "our ability to reach people and the limited number of deaths."

"Let me clarify," she said Friday upon her arrival in Puerto Rico to survey the damage. She said she meant "it was good news that people of Puerto Rico and many public servants of the United States are working together."

Cruz responded, "This is a people-are-dying story."