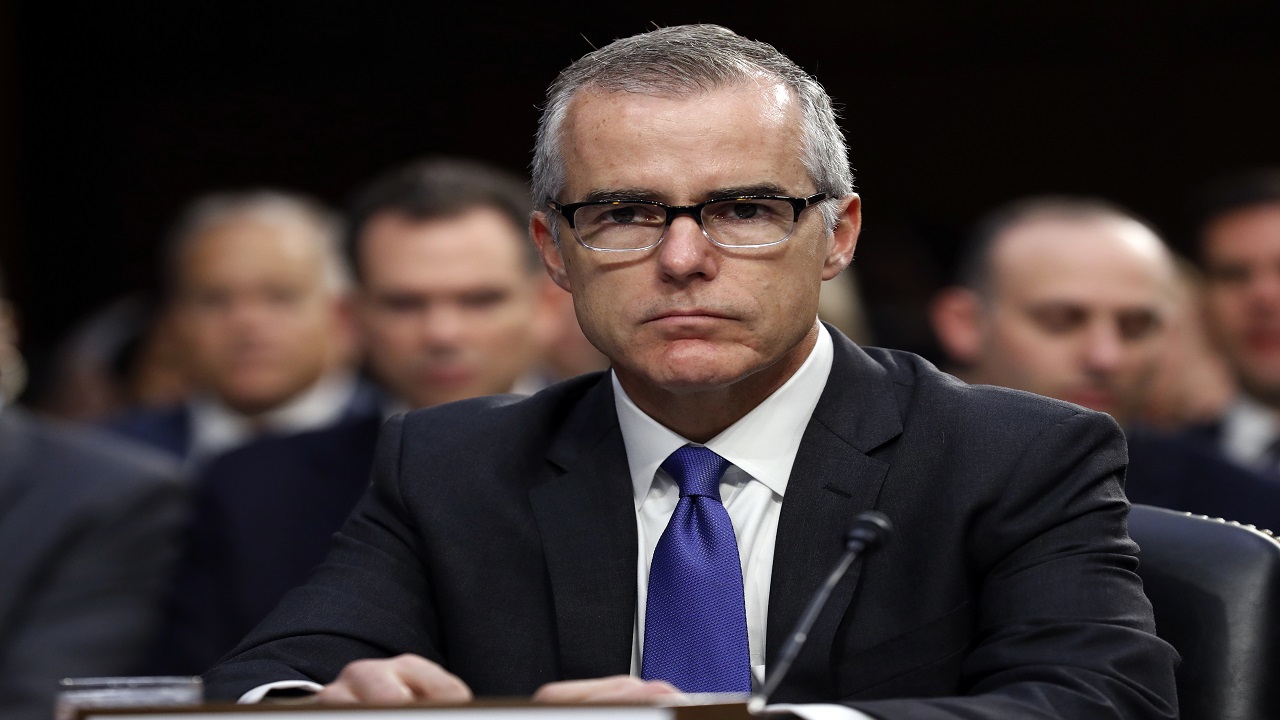 McCabe suggested the move was part of the Trump administration's "war on the FBI."

The dismissal Friday was made on the recommendation of FBI disciplinary officials. An upcoming inspector general's report is expected to conclude that McCabe authorized the release of information to the media and was not forthcoming with the watchdog office as it examined the bureau's handling of the Hillary Clinton email investigation.

"The FBI expects every employee to adhere to the highest standards of honesty, integrity, and accountability," Sessions said in a statement.

McCabe said his credibility had been attacked as "part of a larger effort not just to slander me personally" but also the FBI and law enforcement.

"It is part of this administration's ongoing war on the FBI and the efforts of the special counsel investigation, which continue to this day," he added, referring to Robert Mueller's probe into potential coordination between Russia and the Trump campaign. "Their persistence in this campaign only highlights the importance of the special counsel's work."

McCabe asserted he was singled out because of the "role I played, the actions I took, and the events I witnessed in the aftermath of the firing of James Comey," whom Trump fired as FBI director last May.

Mueller is investigating whether Trump's actions, including Comey's ouster, constitute obstruction of justice. McCabe, a Comey confidant, could be an important witness.

McCabe said the release of the findings against him was accelerated after he told congressional officials that he could corroborate Comey's accounts of Comey's conversations with the president.

McCabe spent more than 20 years as a career FBI official and played key roles in some of the bureau's most recent significant investigations. Trump repeatedly condemned him over the past year as emblematic of an FBI leadership he contends is biased against his administration.

McCabe had been on leave from the FBI since January, when he abruptly left the deputy director position. He had planned to retire on Sunday, and the dismissal probably jeopardizes his ability to collect his full pension benefits. His removal could add to the turmoil that has enveloped the FBI since Comey's firing and as the FBI continues its Trump campaign investigation that the White House has dismissed as a hoax.

The firing arises from an inspector general review into how the FBI handled the Clinton email investigation. That inquiry focused not only on specific decisions made by FBI leadership but also on news media leaks.

McCabe came under scrutiny over an October 2016 news report that revealed differing approaches within the FBI and Justice Department over how aggressively the Clinton Foundation should be investigated. The watchdog office has concluded that McCabe authorized FBI officials to speak to a Wall Street Journal reporter for that story and that McCabe had not been forthcoming with investigators. McCabe denies it.

In his statement, McCabe said he had the authority to share information with journalists through the public affairs office, a practice he said was common and continued under the current FBI director, Christopher Wray. McCabe said he honestly answered questions about whom he had spoken to and when, and that when he thought his answers were misunderstood, he contacted investigators to correct them.

The media outreach came at a time when McCabe said he was facing public accusations of partisanship and followed reports that his wife, during a run for the state Senate in Virginia, had received campaign contributions from a Clinton ally. McCabe suggested in his statement that he was trying to "set the record straight" about the FBI's independence against the background of those allegations.

Despite his defense, officials at the FBI's Office of Professional Responsibility recommended the firing, leaving Justice Department leaders in a difficult situation. Sessions, whose job status has for months appeared shaky under his own blistering criticism from Trump, risked inflaming the White House if he decided against firing McCabe. But a decision to dismiss McCabe days before his retirement nonetheless carried the risk of angering his rank-and-file supporters at the FBI.

McCabe enjoyed a rapid career ascent in the bureau after joining in 1996. Before being named FBI deputy director last year, he led the bureau's national security branch and also the Washington field office, one of the its largest.

But he became entangled in presidential politics in 2016 when it was revealed that his wife, during her unsuccessful legislative run, received campaign contributions from the political action committee of then-Virginia Gov. Terry McAuliffe, a longtime Clinton friend. The FBI has said McCabe received the necessary ethics approval about his wife's candidacy and was not supervising the Clinton investigation at the time.

He became acting director following the firing last May of Comey, and immediately assumed direct oversight of the FBI's investigation into the Trump campaign.

He quickly found himself at odds with the Trump administration.

As a congressional hearing days after Comey's dismissal, McCabe contradicted White House assertions that the Trump campaign investigation was one of the "smallest things" on the FBI's plate. He also strongly disputed the administration's suggestion that Comey had lost the support of the bureau's workforce.

"I can tell you that the majority, the vast majority of FBI employees, enjoyed a deep and positive connection to Director Comey," McCabe said.

White House pushes back against reports of tumult, purges

Sessions defends himself to Congress, says he never lied