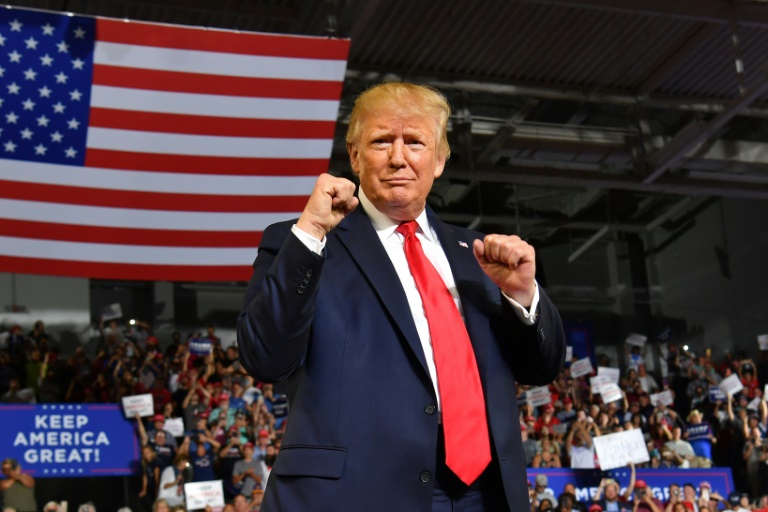 President Donald Trump showed his support for the Venezuelan opposition Wednesday as he met with its delegation to the U.N. General Assembly instead of the official government delegation and called for an end to the "horrible and brutal oppression" of President Nicolas Maduro.

Trump has pointedly refused to rule out a U.S. military intervention in Venezuela, but he said at the meeting on the sidelines of the annual gathering that his first objective is to help secure a peaceful political transition from Maduro to opposition leader Juan Guaido.

"We will stand with the Venezuelan people every single day until they are finally freed from this horrible and brutal oppression," Trump said. "They will be freed. It will happen."

The U.S., which has imposed punishing economic sanctions on Venezuela at a time of deep economic crisis, has joined more than 50 countries in recognizing Guaido as the interim president, arguing that Maduro's reelection last year was not legitimate.

Hours after the meeting, the White House announced an expansive travel ban on all officials of the Maduro administration with the rank of vice-minister and above; and all officers of the Venezuelan security forces at the rank of colonel, or equivalent, and above.

The presidential proclamation also blocks entry to the United States to all members of a pro-government constitutional assembly created to rival the opposition-controlled congress and all members of their immediate families.

Trump met with opposition representatives who presented themselves as the "legitimate" delegation, though the U.N. and other nations still recognize the Maduro government and its delegation.

Trump and members of the delegation singled out Cuba for its support of the security forces and paramilitaries who support the embattled Venezuelan government. "Havana is the mastermind behind this tragedy to sustain Maduro," said Julio Borges, who leads the opposition delegation.

Neither Borges nor Trump mentioned Russia's support for Maduro, who made a surprise visit to Moscow on Wednesday. Russia has been one of Maduro's closest allies as the country has slid into economic and political turmoil, supporting his administration with generous loans.

An additional $52 million in American aid was announced Tuesday in New York by Mark Green, the administrator of the U.S. Agency for International Development. The U.S. funding was mostly repurposed from aid originally earmarked for Honduras and Guatemala that Trump cut last year after accusing the Central American countries of failing to stem the flow of migrants to the U.S.

The Trump administration is more than tripling U.S. support for pro-democracy work in Venezuela and, for the first time, directly funding Guaido as he attempts to force Maduro to give up power to the opposition.

So far, Guaido, even with the international support and widespread public disaffection with the government, has been unable to persuade the security forces to abandon Maduro.

"The Maduro regime does not care about the welfare of their own people," Trump said, calling on the Maduro government to allow humanitarian aid into the country. "They care about their own power. It's what they want — power and money. They want the money too. Not just power."

Citing statistics compiled by the United Nations, Trump said that since 2018, Maduro's Cuban-trained "death squads" have killed up to 10,000 Venezuelans, "and they think that number is extremely low."

Trump says US locked and loaded in response to drone attack