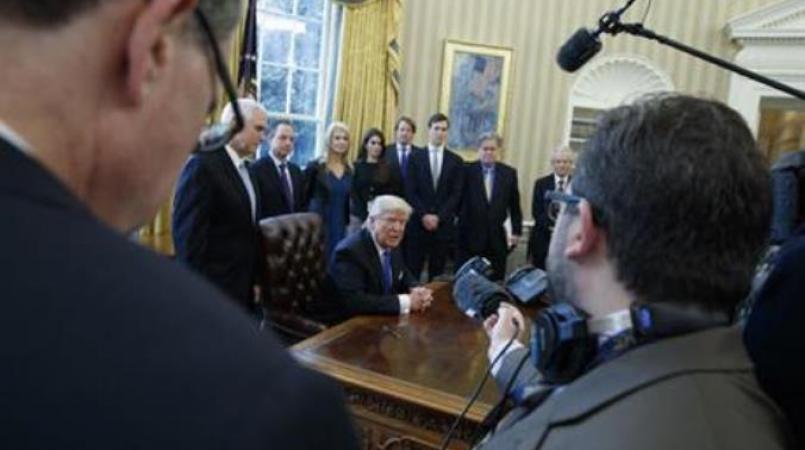 President Donald Trump has narrowed his choice to fill the Supreme Court vacancy to three judges and said he expects to make his decision in the coming days.

A person familiar with the selection process said the three judges, all white men who sit on federal appeals courts, were on the list of 21 potential high court picks Trump announced during the presidential campaign.

The leading contenders — who all have met with Trump — are William Pryor, Neil Gorsuch and Thomas Hardiman, the person said, speaking anonymously because he was not authorized to speak publicly about internal decisions.

Trump has promised to seek someone in the mold of conservative icon Antonin Scalia, who died nearly a year ago after serving on the Supreme Court for more than 29 years. Senate Republicans prevented President Barack Obama from filling the seat, a political gamble that paid off when Trump was elected.

Trump met Tuesday with Senate Majority Leader Mitch McConnell, Senate Democratic Leader Chuck Schumer, Sen. Chuck Grassley and Sen. Dianne Feinstein to discuss the court vacancy. Grassley, R-Iowa, said in a statement that the meeting was productive and "a step in the right direction." Schumer, D-N.Y., said he told Trump "that Senate Democrats would fight any nominee that was outside of the mainstream."

Trump said he plans to announce his choice next week.

McConnell led the Senate in refusing to even to consider Obama's nomination of Judge Merrick Garland to take Scalia's seat, announcing on the night that Scalia died that the vacancy should be filled not by Obama, but by the next president.

Daniel Goldberg, legal director of the liberal Alliance for Justice, said his group almost certainly would oppose anyone from Trump's list. "President Trump has made clear what kind of justice he intends to nominate. He said he intends to nominate a reactionary who doesn't share the constitutional values of the American people and who will undermine fundamental constitutional protections," Goldberg said.

Conservatives said the contenders all share Scalia's commitment to the text and meaning of the Constitution. "These are not stealth candidates. Their records are there for everyone to see and to understand. Their judicial philosophy is well within the mainstream of American legal thought," said Leonard Leo, a conservative lawyer who has been advising Trump on the filling the vacancy.

Of the three leading candidates, only Pryor faced significant opposition when nominated to the appeals court. Senate Democrats refused to allow a vote on his nomination, leading Bush initially to give Pryor a temporary recess appointment. In 2005, the Senate confirmed him 53-45, after senators reached an agreement to curtail delaying tactics for appellate judgeships.

Gorsuch was approved by a voice vote in 2006. Schumer and Feinstein were among the 95 senators who voted for Hardiman's confirmation in 2007. Hardiman is a colleague of Trump's sister, Judge Maryanne Trump Barry.

Pryor has a reputation as staunch conservative with a taste for academic rigor. He once called the landmark 1973 decision legalizing abortion the "worst abomination in the history of constitutional law." As Alabama attorney general, he also angered some conservatives for urging a judicial discipline panel to remove Alabama Chief Justice Roy Moore from office after he refused to obey a court order take down a Ten Commandments monument from the lobby of the state judicial building.

Some conservatives also have recently criticized Pryor for his vote in 2011 in favor of a transgender woman who sued for sex discrimination.

Gorsuch is the closest on Trump's list to a Washington insider — the son of former EPA administrator Anne Gorsuch, educated in the Ivy League and at Oxford, law clerk to Justice Anthony Kennedy and Bush-era Justice Department official.

His opinions and outside writings, praised for their clear, colloquial style, include a call for courts to second-guess government regulations, defense of religious freedom and skepticism toward law enforcement. He has contended that courts give too much deference to government agencies' interpretations of statutes. He sided with groups that held religious objections to the Obama administration's requirements that employers provide health insurance that includes contraception.

Hardiman has sided with jails seeking to strip-search inmates arrested for even minor offenses and has supported gun rights, dissenting in a 2013 case that upheld a New Jersey law to strengthen requirements for carrying a handgun in public. Last year, he joined two 3rd Circuit colleagues in affirming the $1 billion settlement of NFL concussion claims, rejecting complaints that men with depression and mood disorders were left out of the deal. A Massachusetts native, he settled in Pittsburgh, where his wife comes from a family of prominent Democrats.

Trump praised the candidates on his roster after signing several executive actions Tuesday in the Oval Office. "We have outstanding candidates," the president said. "And we'll pick a truly great Supreme Court justice."

He said he would be making a decision this week, and announcing it next week.

FEATURED IMAGE CAPTION: President Donald Trump answers a question about the Supreme Court after signing a series of executive orders, Tuesday, Jan. 24, 2017, in the Oval Office of the White House in Washington.