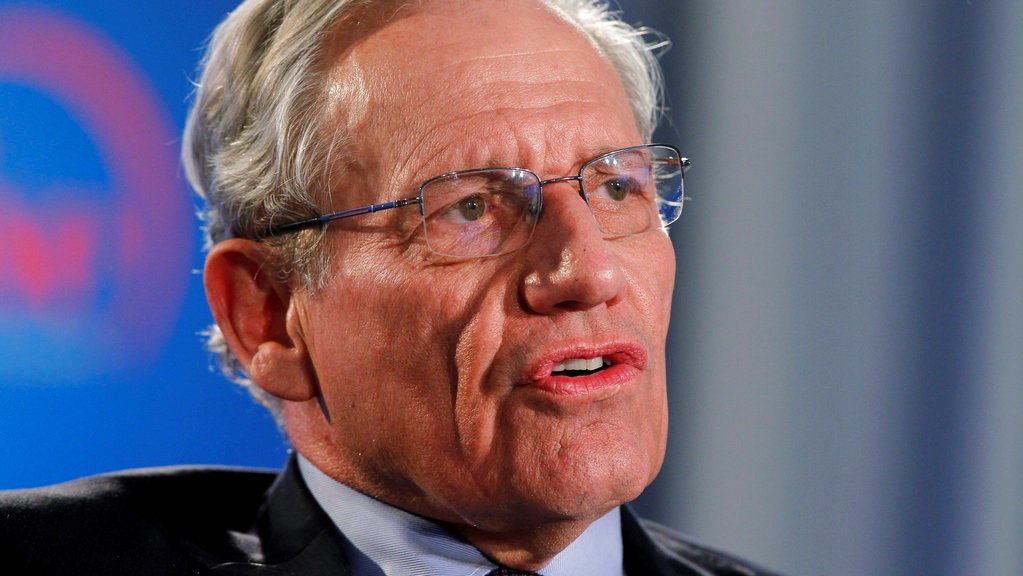 An incendiary tell-all book by a reporter who helped bring down President Richard Nixon set off a firestorm in the White House, with its descriptions of current and former aides calling President Donald Trump an "idiot" and a "liar," disparaging his judgment and claiming they plucked papers off his desk to prevent him from withdrawing from a pair of trade agreements.

The book by Washington Post journalist Bob Woodward is the latest to throw the Trump administration into damage-control mode with explosive anecdotes and concerns about the commander in chief. The Associated Press obtained a copy of "Fear: Trump in the White House" on Tuesday, a week before its official release.

Trump decried the quotes and stories in the book on Twitter as "frauds, a con on the public," adding that Defense Secretary Jim Mattis and chief of staff John Kelly had denied uttering quoted criticisms of the president in the book.

And he denied accounts in the book that senior aides snatched sensitive documents off his desk to keep him from making impulsive decisions. He said in an interview with The Daily Caller, "There was nobody taking anything from me."

Later Tuesday, Trump was back on Twitter denying the book's claim that he had called Attorney General Jeff Sessions "mentally retarded" and "a dumb southerner."

Trump insisted he "never used those terms on anyone, including Jeff," adding that "being a southerner is a GREAT thing." Sessions has been a target of the president's wrath since recusing himself from the Russia investigation.

The publication of Woodward's book has been anticipated for weeks, and current and former White House officials estimate that nearly all their colleagues cooperated with the famed Watergate journalist. The White House, in a statement from press secretary Sarah Huckabee Sanders, dismissed the book as "nothing more than fabricated stories, many by former disgruntled employees, told to make the President look bad."

Woodward did not immediately respond to a request for comment.

The book quotes Kelly as having doubts about Trump's mental faculties, declaring during one meeting, "We're in Crazytown." It also says he called Trump an "idiot," an account Kelly denied Tuesday.

The book says Trump's former lawyer in the Russia probe, John Dowd, doubted the president's ability to avoid perjuring himself should he be interviewed in special counsel Robert Mueller's investigation into Russian election interference and potential coordination with Trump's campaign. Dowd, who stepped down in January, resigned after the mock interview, the book says.

"Don't testify. It's either that or an orange jumpsuit," Dowd is quoted telling the president.

Dowd, in a statement Tuesday, said "no so-called 'practice session' or 're-enactment'" took place and denied saying Trump was likely to end up in an orange jumpsuit.

Mattis is quoted explaining to Trump why the U.S. maintains troops on the Korean Peninsula to monitor North Korea's missile activities. "We're doing this in order to prevent World War III," Mattis said, according to the book.

The book recounts that Mattis told "close associates that the president acted like — and had the understanding of — 'a fifth- or sixth-grader.'"

Mattis said in a statement, "The contemptuous words about the President attributed to me in Woodward's book were never uttered by me or in my presence."

"Mr. Woodward never discussed or verified the alleged quotes included in his book with Secretary Mattis" or anyone within the Defense Department, Manning said.

Woodward reported that after Syria's Bashar Assad launched a chemical weapons attack on civilians in April 2017, Trump called Mattis and said he wanted the Syrian leader taken out, saying: "Kill him! Let's go in." Mattis assured Trump he would get right on it but then told a senior aide they'd do nothing of the kind, Woodward wrote. National security advisers instead developed options for the airstrike that Trump ultimately ordered.

U.S. Ambassador Nikki Haley denied Tuesday that Trump had ever planned to assassinate Assad. She told reporters at U.N. headquarters that she had been privy to conversations about the Syrian chemical weapons attacks, "and I have not once ever heard the president talk about assassinating Assad."

She said people should take what is written in books about the president with "a grain of salt."

Woodward also claims that Gary Cohn, the former director of the National Economic Council, boasted of removing papers from the president's desk to prevent Trump from signing them into law, including efforts to withdraw from the North American Free Trade Agreement and from a deal with South Korea.

Trump did not speak to Woodward until after the book's manuscript was completed. The Post released audio of Trump expressing surprise about the book in an August conversation with Woodward and dismay that he did not have an opportunity to contribute. Woodward tells Trump he had contacted multiple officials to attempt to interview Trump and was rebuffed.

"I never spoke to him," Trump told The Daily Caller. "Maybe I wasn't given messages that he called. I probably would have spoken to him if he'd called, if he'd gotten through."

The book follows the January release of author Michael Wolff's "Fire and Fury," which led to a rift between Trump and Steve Bannon, his former chief strategist, who spoke with Wolff in terms that were highly critical of the president and his family. Wolff's book attracted attention with its vivid anecdotes but suffered from numerous factual inaccuracies.

Woodward's work also comes weeks after former White House aide and "Apprentice" contestant Omarosa Manigault Newman published an expose on her time in the West Wing, including audio recordings of her firing by Kelly and a follow-up conversation with the president in which he claimed to have been unaware of Kelly's decision.

While White House aides have become increasingly numb to fresh scandals, the latest book still increased tensions in the West Wing, especially given the intimate details shared and the number of people Woodward appeared to have interviewed. Some White House officials expressed surprise at the number of erstwhile Trump loyalists willing to offer embarrassing stories of the president and his inner circle.

White House aides on Tuesday coordinated with other officials quoted in the book to dispute troublesome passages. But insiders speculated the fallout could be worse than that from "Fire and Fury," given Woodward's storied reputation.

Woodward's book was already ranked the top-selling book on Amazon on Tuesday.

Trump has been increasingly critical of anonymous sources used by reporters covering his administration. Woodward's account relies on deep background conversations with sources, meaning their identities are not disclosed.

Former George W. Bush press secretary Ari Fleischer defended Woodward's methodology. "I've been on the receiving end of a Bob Woodward book," he tweeted Tuesday. "There were quotes in it I didn't like. But never once - never - did I think Woodward made it up."

He added: "Anonymous sources have looser lips and may take liberties. But Woodward always plays it straight. Someone told it to him."

New York attorney general: No backing down on Trump lawsuit