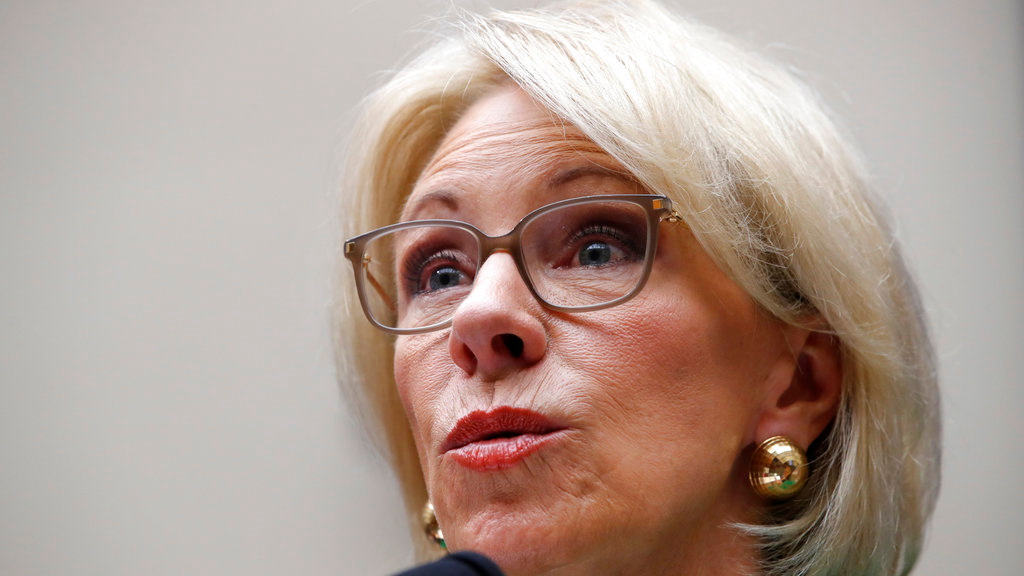 In this May 22, 2018 file photo, Education Secretary Betsy DeVos testifies at a House Committee on Education and the Workforce, n Capitol Hill in Washington. The Trump administration is rescinding Obama-era guidance that encouraged schools to take a person’s race into account to encourage diversity in admissions. That’s according to an administration official who spoke on condition of anonymity. (AP Photo/Jacquelyn Martin)

The Trump administration is rescinding Obama-era guidance that encouraged schools to take a student's race into account in order to promote diversity in admissions, a U.S. official said Tuesday.

The shift would give schools and universities the federal government's blessing to take a race-neutral approach to students they consider for admission.

The action comes amid a high-profile court fight over admission at Harvard University as well as Supreme Court turnover expected to produce a more critical eye toward schools' affirmative action policies.

The high court's most recent significant ruling on the subject bolstered colleges' use of race among many factors in the college admission process. But the opinion's author, Anthony Kennedy, announced his retirement last week, giving President Donald Trump a chance to replace him with a justice who will be more reliably skeptical of admissions programs that take race and ethnicity into account.

A formal announcement was expected later Tuesday from the Justice and Education departments, according to the official, who spoke on condition of anonymity because the official was not authorized to discuss the new guidance ahead of its release.

The new policy would depart from the stance taken by the Obama administration, which in a 2011 policy document said schools have a "compelling interest" in ensuring a diverse student body. The guidance said that while race should not be the primary factor in an admission decision, schools could lawfully consider it in the interest of achieving diversity.

The administration issued a similar guidance document in 2016 aimed at giving schools a framework for "considering race to further the compelling interests in achieving diversity and avoiding racial isolation." That document said elementary and secondary schools, in the interest of diversity, could consider race and socio-economic status in decisions on school zoning and location, grade realignment and enrollment.

The Obama approach replaced Bush-era policy from a decade earlier that discouraged affirmative action programs and instead encouraged the use of race-neutral alternatives, like percentage plans and economic diversity programs.

The Trump administration's move appears in line with Bush administration policy. Such guidance does not have the force of law, but schools could use it to help defend themselves against lawsuits over their admission policies.

The Justice Department in the Trump administration had already signaled its concern about the use of race in admissions decisions. The department this year sided with Asian-American plaintiffs suing Harvard University who argue that the school unlawfully limits how many of Asian students are admitted.

Students for Fair Admissions, the group suing Harvard, is led by Ed Blum, a legal strategist who also helped white student Abigail Fisher sue the University of Texas for alleged discrimination in a case that went to the Supreme Court.

Blum said Tuesday that the organization "welcomes any governmental actions that will eliminate racial classifications and preferences in college admissions." Harvard, meanwhile, said it would continue considering race as an admissions factor to bring together a "diverse campus community where students from all walks of life have the opportunity to learn with and from each other."

Civil liberties groups immediately decried the move, saying it went against decades of court rulings that permit colleges and universities to take race into account.

"We condemn the Department of Education's politically motivated attack on affirmative action and deliberate attempt to discourage colleges and universities from pursuing racial diversity at our nation's colleges and universities," Kristen Clarke, president and executive director of the Lawyers' Committee for Civil Rights Under Law, said in a statement.

The Supreme Court has been generally accepting of considering race in admissions decisions. In 2016, the court, in an opinion written by Kennedy, granted affirmative action policies a narrow victory by permitting race to be among the factors considered in the college admission process.

The ruling bitterly disappointed conservatives who thought that Kennedy would be part of a Supreme Court majority to outlaw affirmative action in education. Justice Antonin Scalia died after the court heard arguments in the case but before the decision was handed down.

The new affirmative action guidance could add to an already contentious fight over the next justice. With Trump expected to announce his nominee next week, the issue should be a central part of any confirmation process, said Howard University School of Law Dean Danielle Holley-Walker.

She called the new guidance "highly unfortunate and counterproductive" and said the decision is another indication that the Justice Department under Attorney General Jeff Sessions is likely to be fairly aggressive toward schools that do continue to factor in race in admissions decisions.

"People have been talking about precedent in regard to Roe. v. Wade" — the landmark 1973 ruling affirming a woman's right to abortion — "but it's important to remember that affirmative action has been a precedent for the past 40 years," she said. "This is a clear attack on precedent. Any Supreme Court nominee needs to be asked if they support precedent related to affirmative action."