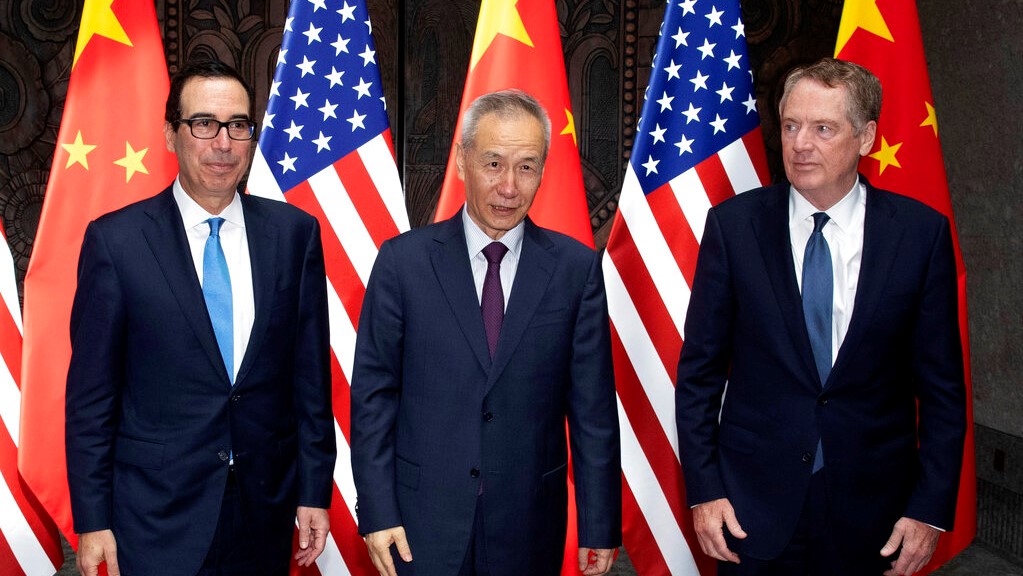 U.S. consumers will likely feel the pain if Trump proceeds with the new tariffs. Trump's earlier tariffs had been designed to minimize the impact on ordinary Americans by focusing on industrial goods. But the new tariffs will hit a vast range of consumer products from cellphones to silk scarves.

The president's announcement via Twitter on Thursday came as a surprise, in part because the White House on Wednesday had said Beijing confirmed that it planned to increase its purchases of American farm products. That word came just as U.S. and Chinese negotiators were ending a 12th round of trade talks in Shanghai, which the White House called "constructive."

"Imposing tariffs is definitely not the right way to resolve trade frictions," Wang Yi told reporters in Bangkok on Friday, where he was attending a meeting of the Association of Southeast Asian Nations.

The Chinese foreign and commerce ministries didn't immediately respond to questions about how Beijing would react.

Though the negotiations concluded without any sign of a deal, they are scheduled to resume next month in Washington.

The Dow Jones Industrial Average, which had been up nearly 300 points earlier in the day, was down nearly 200 points after Trump's tweets announcing the new tariffs. The Dow closed for the day down 280 points — more than 1%.

Trump has long said he was preparing to tax the $300 billion in additional Chinese tariffs. But he had suspended the threat after meeting with President Xi Jinping in Osaka, Japan, in June.

It isn't clear when American consumers are likely to feel the impact of the additional tariffs, but higher prices could show up in stores this fall.

"Attention all Target & Wal-Mart shoppers ... the price on the goods you buy ahead of the holidays are going up due to trade policy," tweeted Joseph Brusuelas, chief economist at the consultancy RSM.

Besides announcing the additional tariffs on Chinese imports, Trump tweeted that "we look forward to continuing our positive dialogue with China on a comprehensive Trade Deal, and feel that the future between our two countries will be a very bright one!"

The president accused Beijing of failing to follow through on stopping the sale of fentanyl to the United States or on purchasing large quantities of farm goods such as soybeans. Speaking to reporters Thursday at the White House, Trump complained that Xi is "not moving fast enough."

Trump said he scheduled the additional tariffs to begin Sept. 1 to give exports already en route from China time to get to the United States — a journey that can take three or four weeks. By setting the import taxes at 10%, he has leeway to ratchet them higher if necessary to further increase pressure on Beijing.

"Until such time as there's a deal," Trump said, "we'll be taxing them."

The world's two biggest economies are locked in a trade war over U.S. allegations that Beijing uses predatory tactics — including stealing trade secrets and forcing foreign companies to hand over technology — in a drive to overtake American technological dominance.

Talks had broken down in May after the United States accused the Chinese of reneging on earlier commitments.

"The fact that this tweet comes after only one meeting with the Chinese delegation following the resumption of talks is extremely concerning," said Rick Helfenbein, president of the American Apparel & Footwear Association.

Wendy Cutler, a former U.S. trade negotiator who is now vice president at the Asia Society Policy Institute, said: "These talks are not getting any easier. I don't expect the Chinese to sit by ... The combination of these latest tariffs, with Chinese counter-retaliation, is going to take a heavy toll on U.S. consumers, workers, farmers and businesses."

Trump's trade war and its consequences were a key factor in the Federal Reserve's decision Wednesday to cut interest rates in an otherwise healthy U.S. economy. During a news conference, Chairman Jerome Powell pointed repeatedly to the uncertainty caused by Trump's pursuit of trade wars on multiple fronts as a reason for the rate cut.

The president's decision to impose a 10% tax on an additional $300 billion of Chinese imports might have been predicated, in fact, on his confidence that Powell's Fed stands ready to cut rates again. The bond market signaled its belief in that theory Thursday, with Treasury yields dropping sharply after Trump's announcement.

And according to the CME Group, market traders now foresee a roughly 70 percent likelihood of another rate cut when the Fed next meets in September. Before Trump's announcement, the likelihood was pegged at under 50 percent.

Sarah Bloom Raskin, a former Fed board member, has warned that Fed rate cuts could embolden Trump to escalate trade battles for that very reason.

In the meantime, the additional Trump tariffs risk further souring the relationship between the world's two largest economies.

"The stage is now set for a further escalation of trade tensions between China and the U.S.," said Eswar Prasad, a Cornell University economist and former head of the China division at the International Monetary Fund. "It has become clear that there is no clear path to a resolution of the trade dispute in the coming months, and China might choose to live with a trade war while waiting out the Trump presidency."

But his administration is providing $16 billion in aid to American farmers — on top of $11 billion last year — to offset sales lost after China imposed retaliatory tariffs on soybeans and other U.S. farm products.

Trump imposes tariffs on $200B more of Chinese goods