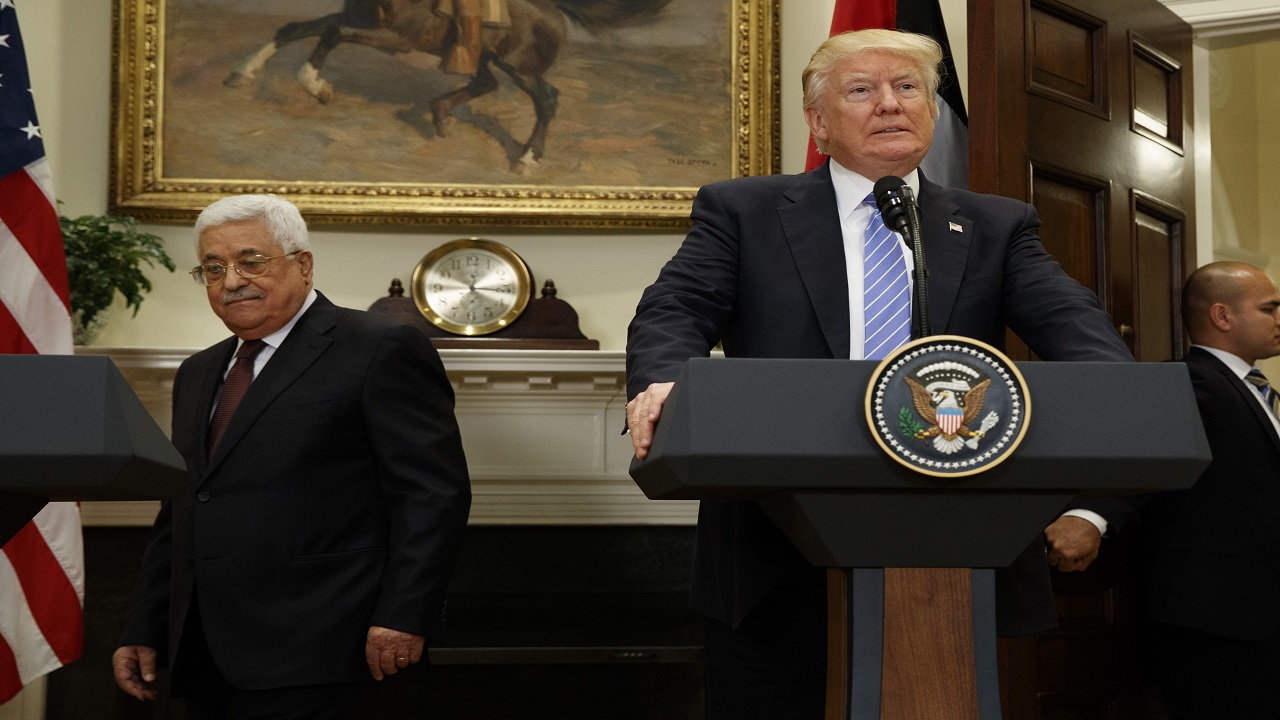 In this May 3, 2017 file photo, President Donald Trump and Palestinian Authority President Mahmoud Abbas arrive in the Roosevelt Room of the White House in Washington.

With a Twitter post threatening to cut off U.S. aid to the Palestinians, President Donald Trump has expressed his frustration over the lack of progress in his hoped-for Mideast peace push. But things could deteriorate even further if Trump follows through on the threat.

Over two decades of on-and-off peace talks, the U.S., Israel and the Palestinians have created a situation of interdependence, with American mediation at the core of this system.

A cutoff in aid would almost certainly harm the Palestinians, particularly those who rely on U.N. refugee services. But Trump's credibility, damaged with the Palestinians after recognizing Jerusalem as Israel's capital, would suffer another blow. And in a worst-case scenario, Israel could find itself footing the bill to provide services to millions of Palestinians while heading closer toward a single binational state with the Palestinians.

Here is a look at U.S. aid to the Palestinians, and the potential implications of that funding drying up.

Q: What aid does the U.S. provide to the Palestinians?

The Palestinian Authority relies heavily on foreign assistance. It receives hundreds of millions of dollars a year from the international community, and the U.S. is a major donor.

The U.S., in contrast to other donors, does not provide direct funding for the Palestinian budget. Instead, its assistance focuses on development projects.

According to the U.S. Consulate, the U.S. has delivered about $5.2 billion in aid to the Palestinians since 1994, with the current level at roughly $400 million a year. This money goes to fund roads, schools, water projects, hospitals and health care, and to help support the Palestinian security forces.

In addition, the U.S. is the largest donor to UNRWA, the U.N. agency that assists Palestinian refugees across the region with services such as housing, health care, education and food assistance. UNRWA says the U.S. contributed over $365 million last year, roughly 30 percent of the agency's budget.

Q: Is the money promised by formal agreement?

There is no formal aid agreement with the Palestinian Authority. The administration requests funds each year that are then approved by Congress.

The Palestinian Authority was established in 1994 as an autonomy government meant to last five years as a prelude to a final peace deal establishing an independent Palestinian state. But after years of failed negotiations and several waves of violence, what was meant to be a temporary arrangement has become permanent.

Today, the U.S. sends little money directly to the Palestinian Authority amid concerns, expressed by U.S. officials and congressmen, that the Palestinians were not doing enough to halt violence, incitement or corruption. Most funds are typically earmarked for projects coordinated through the U.S. Agency for International Development.

Trump's latest Tweet, however, appears to stem from anger over the U.N. General Assembly's vote last month that overwhelmingly rejected his decision to recognize Jerusalem as Israel's capital.

The Palestinians, who seek Israeli-annexed east Jerusalem as their capital, say the U.S. is no longer a suitable mediator, and Trump's Mideast diplomacy appears frozen.

At the time of the U.N. vote, Trump warned that countries that backed the Palestinians risked losing American aid. This week, he also took aim at aid to Pakistan, a country that voted with the Palestinians.

Q: Could the Palestinians get alternative funding?

Since Trump's Jerusalem decision, the Palestinians have been seeking to rally diplomatic support both in Europe and across the Arab world. They would likely turn to the European Union and wealthy Gulf Arab states for financial support as well, though it is far from certain others will step up to fill the void.

Q: What are the implications if the aid is cut off?

The Palestinians have been grappling with reductions in aid from cash-strapped donors for several years, and officials say they can also withstand a U.S. cut-off, especially because the money does not go to their operating budget.

"The Palestinian Authority is not going to collapse if the U.S. stops paying its aid, but it will create more difficulties," said Mohammed Mustafa, an economic adviser to President Mahmoud Abbas.

In the short term, the biggest casualty would be UNRWA. The agency provides services to some 5 million Palestinian refugees and their descendants across the Middle East. The agency, for instance, educates an estimated 270,000 children in Gaza. If schools were forced to close, these children could end up in classrooms run by the ruling Hamas militant group. UNRWA might also be forced to lay off workers in a volatile territory where unemployment already is over 40 percent.

In the long run, things could become even more dire. The Trump administration, already seen as biased by the Palestinians, could have a difficult time bringing them back to the negotiating table as it prepares to float a peace proposal.

Reductions in funding for Palestinian security forces could, ironically, hurt Israeli security. These forces quietly cooperate with Israel in a shared fight against Hamas. For this reason, U.S. officials say security assistance will likely not be touched.

A collapse of the Palestinian Authority, already buckling under hundreds of millions of dollars of debt, could be disastrous for Israel. As an occupying power, Israel could find itself responsible for the welfare and education of over 4 million Palestinians in the West Bank and Gaza.

The Palestinians also might follow through on threats to abandon their dream of establishing an independent state alongside Israel and instead seek equal rights in a single, binational state. This scenario could spell the end of Israel as a democracy with a broad Jewish majority.

Trump blasts NK over new report about its nuclear weapons