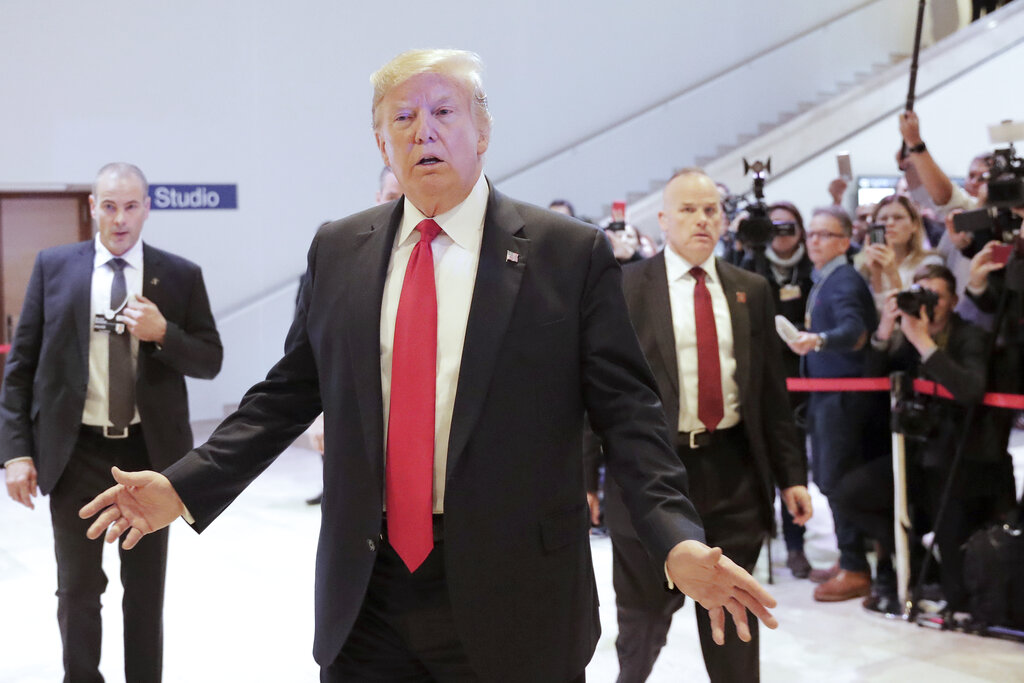 US President Donald Trump leaves the World Economic Forum in Davos, Switzerland, Wednesday, January 22, 2020. Trump's two-day stay in Davos is a test of his ability to balance anger over being impeached with a desire to project leadership on the world stage. (AP Photo/Markus Schreiber)

President Donald Trump said Wednesday the US would soon be imposing visa restrictions on more countries — though it's not clear yet how many nations will be affected by his expansion of the travel ban.

Seven additional nations were listed in a draft of the proposed restrictions — but the countries were notified by Homeland Security officials that they could avoid being included if they make changes before the announcement is made, according to two administration officials who spoke to The Associated Press on condition of anonymity to discuss ongoing negotiations.

The tentative list featured Belarus, Eritrea, Kyrgyzstan, Myanmar, Nigeria, Sudan and Tanzania, according to the officials and a person familiar with the draft proposal. But several countries are believed to have taken action or demonstrated good faith efforts to comply in order to avoid inclusion, the officials said. The steps include better border security, better sharing of identification information among nations and better travel document security, one official said. It's not clear how many nations will wind up on the final list.

Trump told reporters at the World Economic Forum in Davos, Switzerland, that he's doing it to protect the United States.

That order was immediately blocked by the courts, prompting a months-long effort by the administration to develop clear standards and federal review processes to try to pass legal muster. Under the current system, restrictions are targeted at countries that Homeland Security says fail to share sufficient information with the US or haven’t taken necessary security precautions, such as issuing electronic passports with biometric information and sharing information about travellers’ terror-related and criminal histories.

Iraq, Sudan and Chad had been affected by the original order, which the Supreme Court upheld in a 5-4 vote after the administration released a watered-down version intended to withstand legal scrutiny. They were not part of the pared-down version.

During his 2016 campaign, Trump had floated the idea of a ban to keep all Muslims from entering the country and he criticised his Justice Department for the subsequent changes.

Several of the people said they expected the announcement to be timed to coincide with Monday's third anniversary of the first, explosive travel ban, announced without warning on January 27, 2017, just days after Trump took office. That order sparked an uproar, with massive protests across the nation and chaos at airports where passengers were detained.

What to know about the viral coronavirus outbreak in China

As coronavirus spreads, anxiety rises in China and overseas