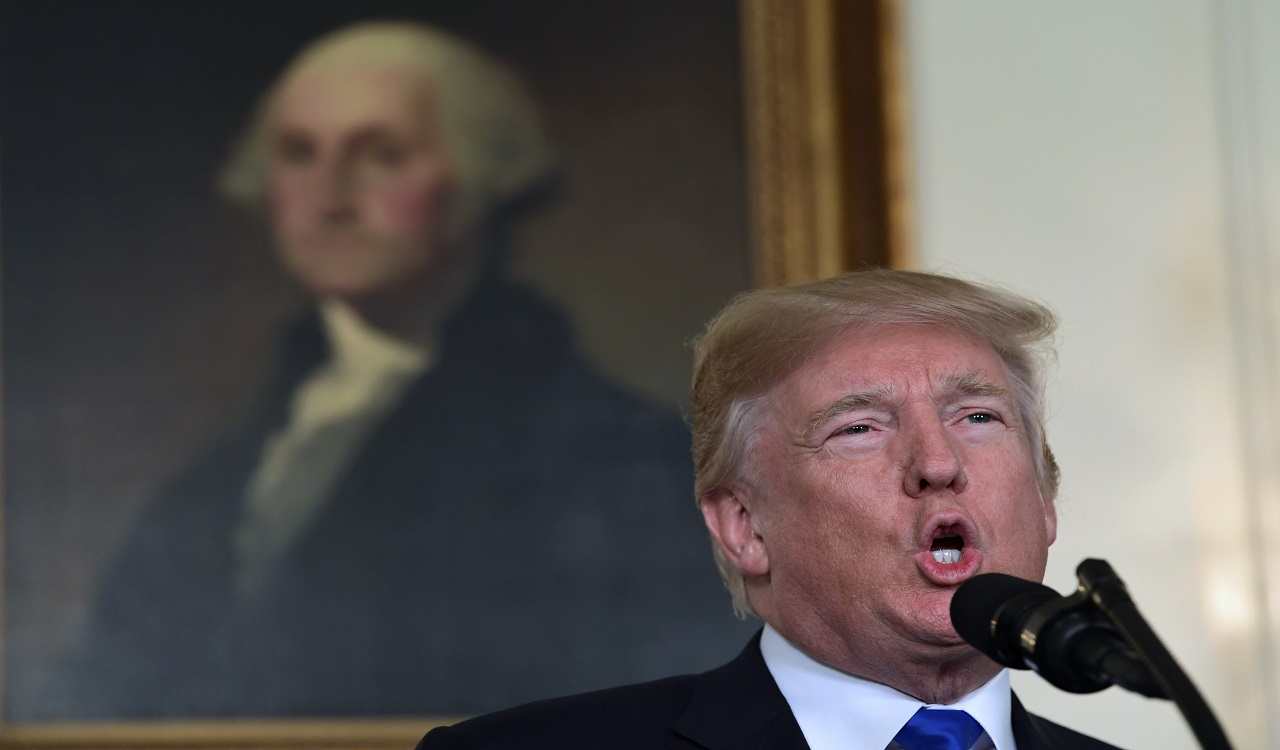 President Donald Trump speaks about Iran from the Diplomatic Reception Room at the White House in Washington, Friday, Oct. 13, 2017.

President Donald Trump on Friday angrily accused Iran of violating the landmark 2015 international nuclear accord, blaming the Iranians for a litany of sinister behavior and hitting their main military wing with anti-terror penalties. But Trump, breaking his campaign pledge to rip up the agreement, did not pull the U.S. out or re-impose nuclear sanctions.

He still might, he was quick to add. For now, he's tossing the issue to Congress and the other nations in the seven-country accord, telling lawmakers to toughen the law that governs U.S. participation and calling on the other parties to fix a series of deficiencies. Those include the scheduled expiration of key restrictions under "sunset provisions" that begin to kick in in 2025, as well as the omission of provisions on ballistic missile testing and terrorism.

Without the fixes, Trump warned, he would likely pull the U.S. out of the deal — which he has called the worst in U.S. history — and slap previously lifted U.S. sanctions back into place. That would probably be a fatal blow for the seven-party accord.

"Our participation can be canceled by me, as president, at any time," Trump declared in a carefully delivered speech read from a teleprompter in the Diplomatic Reception Room at the White House.

He added later, speaking of Congress, "They may come back with something that's very satisfactory to me, and if they don't, within a very short period of time, I'll terminate the deal."

Under U.S. law, Trump faces a Sunday deadline to certify to Congress whether Iran is complying with the accord. That notification must take place every 90 days, a timetable that Trump detests. Since taking office, he has twice reluctantly certified that Iran is fulfilling its commitments.

On Friday, he said he would not do so again.

Trump alone cannot actually terminate the accord, which lifted sanctions on Iran in exchange for concessions regarding its nuclear program. But withdrawing the U.S. would render the deal virtually meaningless.

That would be risky, though, and could badly damage U.S. credibility in future international negotiations. The accord was struck after 18 months of negotiations between the Obama administration, Iran, Britain, China, France, Germany, Russia and the European Union and then endorsed by a unanimous vote in the U.N. Security Council.

Trump's main national security aides have all argued for staying in the deal. So have key allies in Europe who are leery of altering an accord that they believe has prevented Iran from assembling an arsenal of atomic weapons.

Iranian President Hassan Rouhani said that his country would continue to stick to the nuclear deal and that the U.S. was isolating itself, "more lonely than ever," by condemning the accord.

Indeed, the leaders of Britain, Germany and France urged Trump in a joint statement not to do anything rash.

"We encourage the U.S. administration and Congress to consider the implications to the security of the U.S. and its allies before taking any steps that might undermine the (deal), such as re-imposing sanctions on Iran lifted under the agreement," they said. Still, they added, "Independent of the (deal) we need to make sure that our collective wider concerns are being addressed."

In Israel, Prime Minister Benjamin Netanyahu praised Trump and said the U.S. president had created an opportunity to "fix this bad deal" and roll back Iran's aggression. Netanyahu has long warned that the accord failed to address Iran's support for militant groups who act against Israel.

Trump opened his speech by reciting a long list of grievances with Iran dating back to the 1979 Islamic Revolution and the seizure of the U.S. Embassy and American hostages in Tehran. He then noted terrorist attacks against Americans and American allies committed by Iranian proxies, such as Hezbollah, and Iran's ongoing ballistic missile tests.

"We cannot and will not make this certification" that Iran is complying with the accord, he said. "We will not continue down a path whose predictable conclusion is more violence, more terror and the very real threat of Iran's nuclear breakout."

But "decertifying" the deal stops well short of pulling out and simply moves the issues over to Congress. Lawmakers now have 60 days to decide whether to put the accord's previous sanctions back into place, modify them or do nothing.

Republicans face a heavy lift in rallying GOP lawmakers and Democrats behind legislation that would make the accord more stringent and please Trump. Some GOP senators, like Marco Rubio of Florida, question whether the pact can be fixed.

Further complicating matters, a GOP lawmaker who will be at the center of what's sure to be a stormy debate is Bob Corker of Tennessee, who recently compared Trump's White House to "an adult day care center" and said the president could be setting the U.S. on a path toward World War III.

Ahead of Trump's speech, Secretary of State Rex Tillerson said the administration wants lawmakers to come up with legislation that would automatically re-impose sanctions that were lifted under the deal should Iran cross any one of numerous nuclear and non-nuclear "trigger points."

Those would include illicit atomic work or ballistic missile testing; support for Syrian President Bashar Assad, Lebanon's Hezbollah movement and other groups that destabilize the region, or human rights abuses and cyber warfare, Tillerson said.

Also Friday, Trump said he was hitting Iran's Revolutionary Guard with sanctions for supporting terrorism. But the U.S. is not adding the Guard to the formal U.S. list of foreign terrorist organizations. That step would force the U.S. to take even further steps against the Guard that Tillerson says could be problematic.