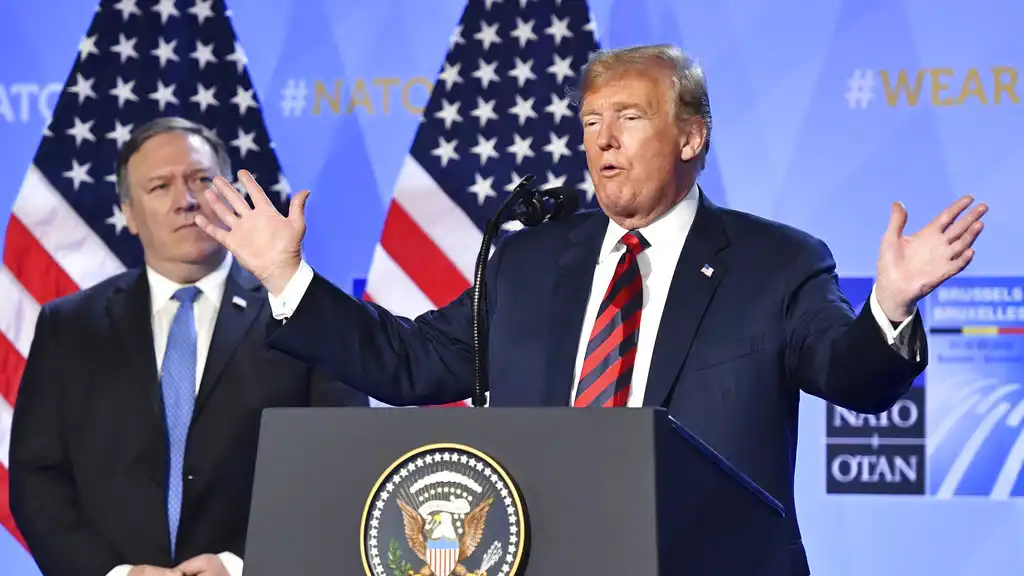 U.S. President Donald Trump raises his hands during a press conference after a summit of heads of state and government at NATO headquarters in Brussels, Belgium, Thursday, July 12, 2018. (AP Photo/Geert Vanden Wijngaert)

President Donald Trump closed out his chaotic two-day visit to NATO Thursday by declaring victory, claiming that member nations caved to his demands to significantly increase defence spending and reaffirming his commitment to the alliance.

But there were no immediate specifics on what he had achieved, and French President Emmanuel Macron quickly disputed Trump's claim that NATO allies have agreed to boost defence spending beyond 2 percent of gross domestic product.

Trump had spent his time in Brussels berating members of the military alliance for failing to spend enough of their money on defence, accusing Europe of freeloading off the U.S. and raising doubts about whether he would come to members' defence if they were attacked.

Trump said he made his anger clear to allies on Wednesday.

"Yesterday I let them know that I was extremely unhappy with what was happening," Trump said, adding that, in response, European countries agreed to up their spending.

"They have substantially upped their commitment and now we're very happy and have a very, very powerful, very, very strong NATO," he said.

Trump did not specify which countries had committed to what, and it remained unclear whether any had changed their plans. He seemed to suggest a speeded-up timeline, saying nations would be "spending at a much faster clip."

NATO countries in 2014 committed to spending 2 percent of their gross domestic products on defence within a decade. NATO has estimated that only 15 members, or just over half, will meet the benchmark by 2024 based on current trends.

Macron, in his own press conference, seemed to reject Trump's claim that NATO powers had agreed to increases beyond previous targets. He said the allies had confirmed their intention to meet the goal of 2 percent by 2024 and no more.

The emergency session came amid reports that Trump had threatened to leave the alliance if allies didn't immediately up their spending, but officials said no explicit threat was made.

"President Trump never at any moment, either in public or in private, threatened to withdraw from NATO," Macron said.

Trump has taken an aggressive tone during the NATO summit, questioning the value of an alliance that has defined decades of American foreign policy, torching an ally and proposing a massive increase in European defence spending.

Earlier Thursday, Trump called out U.S. allies on Twitter, saying, "Presidents have been trying unsuccessfully for years to get Germany and other rich NATO Nations to pay more toward their protection from Russia."

He complained the United States "pays tens of Billions of Dollars too much to subsidise Europe" and demanded that member nations meet their pledge to spend 2 percent of GDP on defence, which "must ultimately go to 4%!"

Under fire for his warm embrace of Russia's Vladimir Putin, Trump on Wednesday also turned a harsh spotlight on Germany's own ties to Russia, alleging that a natural gas pipeline venture with Moscow has left Angela Merkel's government "totally controlled" and "captive" to Russia.

He continued the attack Thursday, complaining that "Germany just started paying Russia, the country they want protection from, Billions of Dollars for their Energy needs coming out of a new pipeline from Russia."

"Not acceptable!" he railed before arriving late at NATO headquarters for morning meetings with the leaders of Azerbaijan, Romania, Ukraine and Georgia.

During the trip, Trump questioned the necessity of the alliance that formed a bulwark against Soviet aggression, tweeting after a day of contentious meetings: "What good is NATO if Germany is paying Russia billions of dollars for gas and energy?"

Merkel, who grew up in communist East Germany, shot back that she had "experienced myself a part of Germany controlled by the Soviet Union, and I'm very happy today that we are united in freedom as the Federal Republic of Germany and can thus say that we can determine our own policies and make our own decisions and that's very good."

Trump tweeted that NATO countries "Must pay 2% of GDP IMMEDIATELY, not by 2025" and then rattled them further by privately suggesting member nations should spend 4 percent of their gross domestic product on defence — a bigger share than even the United States currently pays, according to NATO statistics.

Still, Trump has been more conciliatory behind the scenes, including at a leaders' dinner Wednesday.

"I have to tell you that the atmosphere last night at dinner was very open, was very constructive and it was very positive," Kolinda Grabar-Kitarovic, the president of Croatia, told reporters.

Amid the tumult, British Prime Minister Theresa May, whose government is in turmoil over her plans for exiting the European Union, sounded a call for solidarity among allies.

"As we engage Russia we must do so from a position of unity and strength - holding out hope for a better future, but also clear and unwavering on where Russia needs to change its behaviour for this to become a reality," she said.

Trump heads next to the United Kingdom. Although Trump administration officials point to the longstanding alliance between the United States and the United Kingdom, Trump's itinerary in England will largely keep him out of central London, where significant protests are expected.

Instead, a series of events — a black-tie dinner with business leaders, a meeting with May and an audience with Queen Elizabeth II — will happen outside the bustling city, where Mayor Sadiq Khan has been in a verbal battle with Trump.

Woody Johnson, the U.S. ambassador to the United Kingdom, dismissed the significance of the protests, telling Fox News that one of the reasons the two countries are so close "is because we have the freedoms that we've all fought for. And one of the freedoms we have is freedom of speech and the freedom to express your views. And I know that's valued very highly over here and people can disagree strongly and still go out to dinner."

He also said meeting the queen would be an experience Trump "will really cherish."