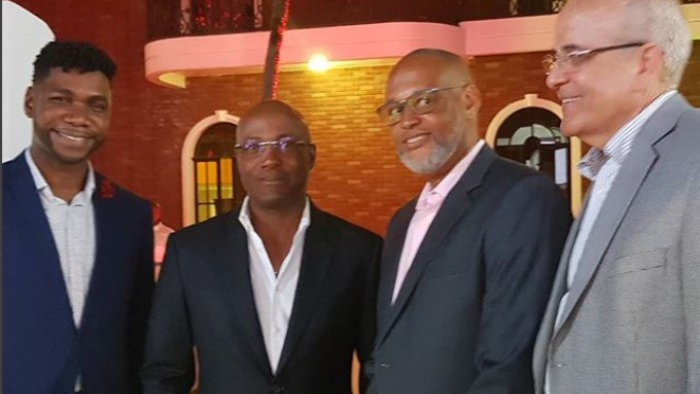 Cricket legend Brian Lara now has a line of eyewear in his name.

The Brian Lara Vision Collection was launched on Thursday night at Lara’s residence in Port-of-Spain at an event themed ‘Look Forward’.

The eyewear is a product of Ferreira Optical, a Trinidad and Tobago eyewear company that was founded in 1973.

The Brian Lara Vision Collection was designed by a British designer who did extensive research into Lara’s cricketing career, visiting Lord’s and his former club Warwickshire. The line features design elements such as the wicket stumps, cork ball and the boundary rope. The West Indies cricket team colours are also incorporated into the design while Lara’s record-breaking achievements are honoured with the 400 and 500 lines in the collection. Among the materials used are titanium, 18-carat gold and buffalo horn.

It is important to note the eyewear line is not a sports line as the company wanted to represent Lara as he is today, a respected icon.

The company began manufacturing its own line of eyewear in 2009 called Emmanuel Nissi which means God with us, God in us.  Looking at the recession enveloping the world at that time, the company knew T&T would not be immune and thought it best to produce its own eyewear to keep costs down and keep their products affordable to customers.

Sean Francis, Chief Executive Officer of Ferreira, told Loop that having developed competencies in the process of developing its own eyewear, the company was challenged in a competitive environment and needed to find a way to differentiate itself from the competition.

“How can we leverage the competencies we have to make a difference? We looked at it and said if we could develop a rand of eyewear with a local icon that would do something for us and the person who came on top of our list was Brian Lara,” he said.

“We were looking for someone with an inspirational life story and whose accomplishments are significant and long-standing and recognised not just in Trinidad but across the region. The way in which Brian makes us proud, we believed he would be a good person to align ourselves with,” said Francis.

With the help of a friend, Francis contacted Lara’s attorney and they met with the cricketer, who admitted at the launch that he got goosebumps listening to the proposal to use his name for the eyewear line.

The agreement with Lara is initially for four years but, said Francis, their intention is to extend it beyond that.

“For us, it is a risk, but we have an internal sense it will do well,” he said.

Once Lara agreed to the partnership, Ferreira Optical sourced the designer.

“He was not involved in the design and concept. Once we were able to come to an agreement the parameters of which we would be able to operate in terms of using his names etc, we hired a frame designer from England and that was in a sense what worked for us. From the time we said Brian Lara she knew him and the excitement from her was obvious. It wasn’t lost on her the opportunity that was being presented in designing frames that would represent him. In terms of existing brands we wanted them to be positioned in the same look and feel of some existing premium brands,” said Francis.

The design process took two months and the frames were manufactured in Hong Kong and China.

Francis plans to push the line throughout the region, stating that they are the first Caribbean eyewear brand to create a line around a celebrity.

“We are extremely excited because of the opportunities that have been presented to us. So far everyone who has seen the collection is pleased, excited about what they see. It shows the effort that went into making it a quality product design and construction," he said.