For the first time in approximately three years, Trinidad and Tobago will be able to fully see the upcoming ‘Blood Moon’ lunar eclipse, which is also a supermoon, on January 21, 2019.

Although Trinbagonians were able to see the last partial lunar eclipse in August 2017, the last time a total lunar eclipse was fully visible to Trinidad and Tobago was on September 27-28, 2015.

However, on January 21, 2019, the total phase of this total lunar eclipse will be visible from North and South America, Europe and western Africa.

Central and eastern Africa and Asia will see a partial eclipse of the Moon.

The full eclipse should be visible to Trinbagonians from around midnight on January 21, 2019. 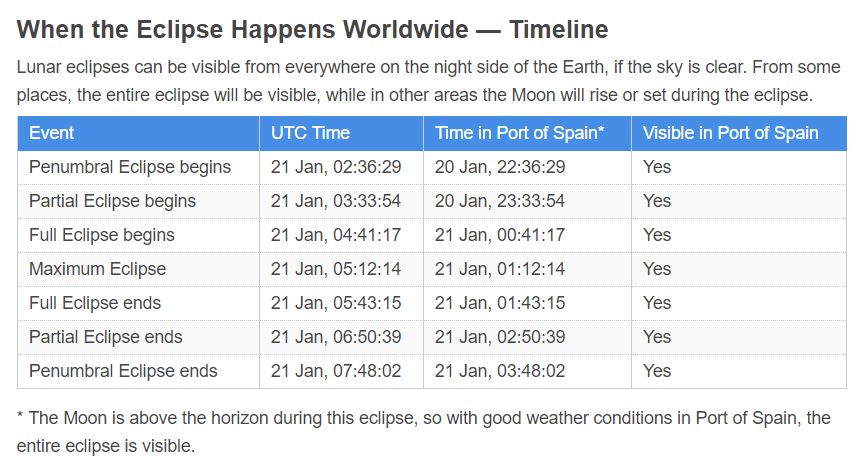 According to a report by meteorologist and avid astronomer Joe Rao, this month’s lunar eclipse is supposed to be a ‘blood moon’ and a ‘supermoon’, meaning it will appear to be larger than usual.

The phrase ‘blood moon’ is a misnomer as the moon can vary in colour from red to brown, grey or even black during the eclipse.

Traditionally, the January full moon is known as the "Wolf Moon." Names such as these are said to have been handed down from people living in old England or from Native Americans and are promulgated today in many popular almanacs.

Will you be staying up to view the eclipse?

Pedestrian killed by car during eclipse viewing in US

The lore and lure of eclipses: Blood, sex and some snacking