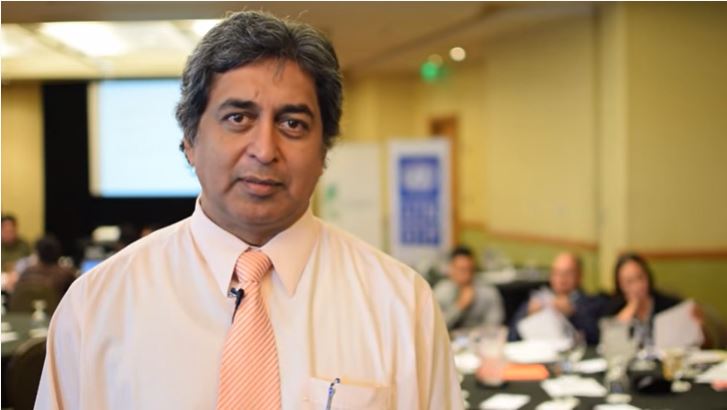 Kishan Kumarsingh, Head of the Multilateral Environmental Agreements Unit in the Ministry of Planning

Trinidad and Tobago is continuing to meet the targets of its Nationally Determined Contribution (NDC) under the Paris Climate Change Agreement despite the postponement of the United Nations Climate Change Conference to November 2021.

This was reported by Kishan Kumarsingh, Head of the Multilateral Environmental Agreements Unit in the Ministry of Planning. Kumarsingh was speaking in a recent virtual lecture to employees of LNG production company Atlantic.

The lecture explored the country’s key obligations under the Paris Agreement and the nation’s policy framework for climate change, as well as formed part of Atlantic’s ongoing initiatives to promote environmental awareness.

Kumarsingh outlined some of the support activities now in train, as part of the NDC implementation plan. It aims to accomplish a 15% reduction in overall cumulative emissions from the local power generation, transport and industrial sectors equivalent to 103 Million Tonnes of carbon dioxide (MTCO2e) relative to a business-as-usual baseline trajectory by 2030.

As part of that target, the NDC focuses on achieving by an unconditional component - not dependent on international financing - a reduction in public transportation emissions by 30% or 1.7 MTCO2e. This would be largely implemented through the State-funded compressed natural gas (CNG) fuel-switching initiative.

This is expected to cost US$2 billion to be financed domestically and through international climate finance such as the Green Climate Fund. Kumarsingh explained that mitigation plans have been developed for the three emitting sectors and added that work was also in progress to fund the related initiatives on an NDC financial investment plan.

He stated: “Some of the sectoral plans to reduce emissions have already started. 10% renewable energy by 2021, for example, is already underway.”

The Government official added that while the strategy to support a CNG conversion fleet for public and private transportation had already begun an even more visionary approach was now being explored.

Kumarsing said: “We hope to move towards sustainable transport, through electric vehicles charged by renewable energy, so it will be absolutely emissions-free transport, as CNG is transitionary and is still a fossil fuel.”

He also disclosed that energy conservation and energy efficiency initiatives had been identified for the industrial sectors.

Andrew Wharton, Atlantic’s Vice President of Health, Safety, Security and the Environment (HSSE) explained that Atlantic’s broader objective is to help promote sound environmental practises as a key component of building a sustainable future for the country.

Wharton said: “Mr Kumarsingh’s lecture helped to sensitise Atlantic’s employees to the wider national commitment to the global community in terms of international multilateral agreements geared towards the fight against climate change. The lecture helped to highlight that everyone has a role and every effort counts.”

As part of its commitment to sustainability and to help build a sustainable future for Trinidad and Tobago, LNG production company Atlantic hopes to build environmental awareness among primary school children and its employees, service providers, and home community Point Fortin.

Every year, employees, their families and service providers are encouraged to participate in the company’s recycling programme which in 2019 collected a total of 18 tonnes of cardboard, plastic, paper, glass, and cans.

No swearing-in of Government today