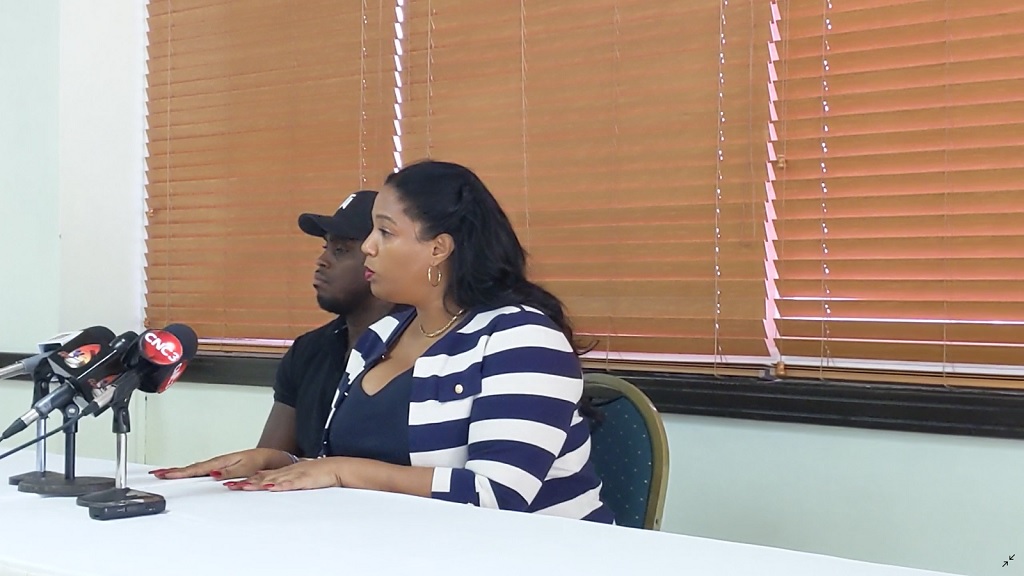 Photo L-r: Executive member of the the Trinidad and Tobago Promoters' Association, Kwesi Hopkinson and spokesperson Paige de Leon speak on legal action filed against COTT and two other organisations for clarity on regulations and fees at a media briefing on February 13, 2020. Photo by Alina Doodnath.

Speaking at a media briefing on Thursday, Association spokesperson Paige de Leon said the decision was taken after the issues they raised over the past years were not being addressed.

“The problems and the challenges the Association has had are well-documented and unfortunately despite our best efforts, they continue to be.”

“What we as an Association decided after our first round of dialogue…was to find a way to legitimately and sustainably create and have implemented standards for how events are conducted by our members as well as how the event tourism industry interacts with the country’s administration. By administration we mean the courts, the police, the EMA (Environmental Management Authority) etc.”

“As of this morning we have issued legal letters to COTT, the TTCO (Trinidad and Tobago Copyright Collection Organisation) and Awesome Copyright to ask them to give specific information about how they interact with the event entertainment industry. There’s been a public squabble…what that always ends up being (is) ‘If you don’t do this we will shut your event down’.

De Leon said each year event promoters faced a ‘moving goalpost’ of requirements and fees which they said was untenable.

She said more letters will be sent to other stakeholders.

“We started with the CMOs (Copyright Management Organisations) because of the fact that this year that problem was particularly acute. We will be taking similar action with regard to all stakeholders in the industry in the short- to medium term.

“We hope to outline the challenges that we have and to have the persons whom we’ve issued letters to give information and treat with it in a straightforward and transparent manner,” she said.

De Leon added that the Association found the noise regulations of the Environmental Management Authority (EMA) ‘unreasonable’ and asked that they be reviewed.

“There are no parameters that are specific…it’s a matter of your own judgement. So stakeholders we interact with, with the exception of one or two, for eg. the EMA.”

“We recognise this is a contentious issue, we understand there are issues in residential areas. But we are contending if this industry is able to continue…that we need to relook those parameters because we believe there was a certain level of unreasonableness in how the variations are granted, when and by whom and moreso, how enforcement takes place.”

De Leon said the Association appreciates the moratorium which takes place from Carnival Friday to Carnival Tuesday, but said outside of that review is needed.

She said the Association estimated that approximately 100,000 people are employed, either directly or indirectly, during the Carnival period.

De Leon said the event industry should be supported but instead it’s being strangled and noted several events which were cancelled this year, however she did not specify which events were cancelled.

“It’s not just about promoters throwing a party to make money. There’s an immense amount of social contribution…it’s because of these events that many artistes, artisans, craftsmen, entrepreneurs etc are able to derive a living.”

“We understand what our contribution is and we want to make sure…the industry is treated fairly. We need to have space to grow this industry and what we’ve been saying for the last two years is the industry is being stifled.

“We’ve seen a tremendous amount of cancellations this year, we’ve not seen improvements in the areas (we outlined) and because of that we feel we need to take this legal action,” she said.

The group said they have issued a deadline for the request but said as the matter is pending they would not go into details.