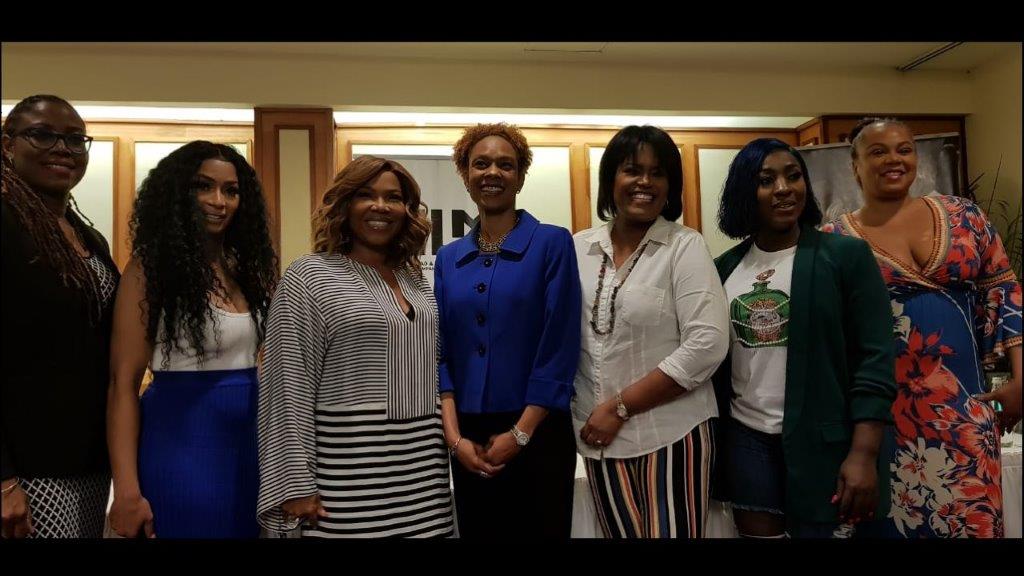 It’s official - Trinidad and Tobago will be featured in VH1's Love and Hip Hop Atlanta Season 8.

This was confirmed in a press conference on Tuesday hosted by Imagine Media and attended by representatives from the Love & Hip Hop cast and executive crew, FilmTT and Tourism Trinidad Ltd.

Speaking to the media, Mona Scott-Young, the powerhouse CEO of Monami Entertainment and producer of the popular reality series, among others, confirmed that T&T should be the backdrop to at least two episodes in the new season, which is expected to premiere in May or June of this year.

Scott-Young said she was thrilled to have been able to bring the show to Trinidad this year, joking that cast member Karlie Redd, who has Trinidadian roots, had been ‘screaming Trinidad’ since season one.


Now that they’ve arrived, the cast and crew have been busy soaking in the sights, sounds and tastes of Trinidad and Tobago, deliberately showcasing attractions outside of just Carnival.

Scott-Young revealed that another production coming to T&T’s shores will be focusing on Trinidad and Tobago Carnival, and so, the decision was made to ensure the coverage would not be repetitive, giving viewers a holistic view of everything the country has to offer.

“We were very happy to be able to showcase something other than the main thing that Trinidad is known for. A lot of times islands get relegated to one season or one element and people miss out on the fact that it’s beautiful all year round and there’s so much more to experience.”

The cast members, among them rappers Yung Joc and Lil Scrappy, dancehall artiste Spice and personalities Karlie Redd, Mimi Faust, Tokyo Vanity and Rasheeda, have been excitedly documenting their trip to Trinidad and Tobago on social media.

They were treated to a wide range of activities including a visit to the Caroni Bird Sanctuary, a mud volcano and the Bamboo Cathedral in Macqueripe along with a number of other undisclosed attractions.

Karlie Redd, visibly emotional, said she was so excited to show her castmates everything that Trinidad had to offer.

“Even though we didn’t get to do Carnival, the fact that we are here...I’m so excited that when people get to see this they’re going be like...WOW!”

Government stakeholders, meanwhile, are hoping the franchise’s presence here in Trinidad and Tobago will serve as a positive boost to the country’s film and tourism sectors.

Speaking at the conference, FilmTT’s Managing Director Nneka Luke explained that Love and Hip Hop’s trip to Trinidad and Tobago has been many months in the making.

Luke said the Love and Hip Hop franchise was the latest to benefit from FilmTT’s film-friendly network of agencies, ministries and partners.

In the first quarter of the 2018/2019 period alone, FilmTT says it has worked closely with eight productions, from the UK, US, Canada and France, which collectively utilised 385 room nights on the island, hired over 320 local cast, crew and suppliers, and collectively spent some TT $2.5 million in services in Trinidad and Tobago.

CEO of the newly established Tourism Trinidad LTD, Camille Campbell said the company’s mission is destination marketing and said that film and TV productions like Love & Hip Hop could be powerful ways to promote Trinidad and Tobago’s tourism offering.

For those curious about the opportunities available to locals, Luke encouraged suppliers to ensure they are on FilmTT’s production directory so they can be called upon to work on any productions coming to Trinidad and Tobago.